German Shepherds are one of the boldest and balanced dog breeds on earth.

They also produce some of the cutest sounds when they try to communicate with us.

One of these sounds is the famous German Shepherd whining.

The German shepherd whining can be due to several reasons. The dog is either asking for something or is trying to alert you to something unusual. A German shepherd may also whine when it is in pain, anxious, or feels sick.

You have seen it before.

You are casually going about your day and in the background, your GSD pup is whining and pacing around.

Occasionally, they will walk up to you and place their face or paw into your hands.

Some whines are familiar to you but others can get you puzzled.

You cannot help but ask yourself, why does my German Shepherd whine so much?

Why do German Shepherds whine? 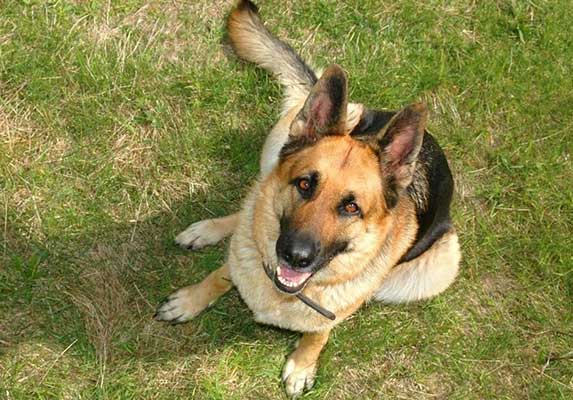 Here are some of the top reasons that explain your German Shepherd’s whining;

Yes, the German Shepherd is a polite fellow and will ask for anything they wish to have.

This can be water, attention, a walk outside, or a pet on the head.

Usually, when your pup gets what he wants, the whining stops.

But what if the German Shepherd whining does not stop?

For instance, a German Shepherd pup that continues to whine for food even after eating.

If this happens, usually there is an underlying problem like a digestive disease.

They love to greet you with a small whine and an excited wag of the tail.

It is usually an excited but short-lived whine which is usually harmless.

So, if your GSD pup runs at you whining and wagging the tail, he is just happy to see you.

But if you do not want him to do the same to strangers or your guests, then you have to train him to stop.

If your GSD pup has pain in any area of his body, he will communicate it through whining.

It could be a pain in one of his limbs which will also show through limping.

It could also be pain from an internal organ caused by degenerative diseases.

Incessant whining in a German Shepherd dog could also be a sign of sickness.

Digestive issues like bloating or irritable bowel syndrome will make your GSD whine a lot.

You will also notice the dog lying down a lot, refusing to eat, or constipating.

Other diseases that affect German Shepherd dogs include;

How Cold Is Too Cold For a German Shepherd?

As bold as the German shepherd is, he sometimes gets afraid of things he does not know.

It could be a new friend visiting you or a strange noise in the neighborhood.

A raccoon rummaging through your trash at night could also send your German Shepherd scampering and whining.

German Shepherds are highly intelligent and thrive on intense training and activity.

If a GSD feels he is not being challenged enough physically and mentally, he will whine out of boredom.

Whining can escalate to destructive behavior like chewing shoes, upholstery, or anything your GSD pup can sink his teeth into.

Constant physical activity is important in a German Shepherd’s growth and development.

A German Shepherd is one of the listed breeds of dogs that easily suffer separation anxiety.

Dogs like the Toy Poodle suffer anxiety from being left alone.

A German Shepherd’s anxiety is caused by the distress he gets out of boredom.

As weird as it sounds, a German Shepherd dog can whine at you to apologize.

They are very intelligent breeds that know how to read their owner’s emotions.

A dog desires affection more than its dinner. Well – almost

He will knock over your glass of wine or chew through all your toilet rolls.

But if you catch him in the act, a German Shepherd will whine to apologize.

His head will hang low and the tail tucked between the legs.

A German Shepherd dog is willing to apologize to win your affection back.

How to stop a German Shepherd from whining? 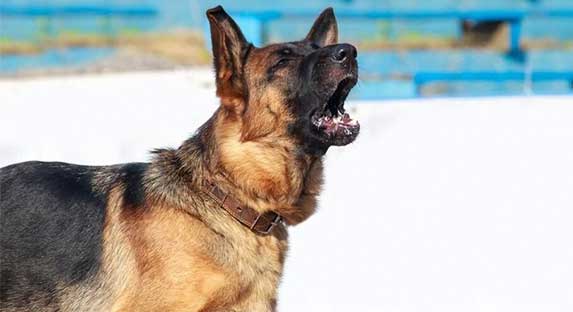 If your German Shepherd dog is whining out of happiness or when apologizing, it is normal.

This is no cause for alarm.

But a GSD pup that is constantly whining could have an underlying health issue.

Take your German Shepherd dog to a vet clinic to get checked.

This helps know if your dog is sick or in pain.

If the German Shepherd whining is a behavioral issue, you will have to train them out of the habit.

Train your German Shepherd dog to bark only when necessary.

It helps not to give the German Shepherd dog attention every time he whines — for example when he spots a stranger passing by or a rodent around your home.

Buy them more toys to play with and engage them in various games.

German Shepherd dogs excel at obstacle courses where their body and minds are equally engaged.

It also pays to train your German Shepherd to stay calm.

In this type of training, you reward calmness and ignore whining or any loud behavior.

This training helps focus a German Shepherd’s attention on you and away from distractions. It is also a great way to control your GSD when you are outside for a walk or at the dog park.

VIDEO: How to Stop Your Dog Whining

Constant German Shepherd whining could be out of fear, anxiety, sickness, and even boredom.

Why does my German Shepherd whine when I leave?

German Shepherds get attached to their humans. When separated from their owner, they do not feel so confident about themselves. This is why your GSD pup whines whenever you leave.

Animal behavior experts discovered that German Shepherd release oxytocin when they stare at their owners. This is a feel-good hormone they release when staring at you affectionately. The dog is also bonding with you more.

Why is my German Shepherd whining and aggressive?

It could be a sign that they are in pain. The German Shepherd will also be aggressive if you try to touch the source of pain. Rush the dog to a vet for a proper diagnosis.

How do I make my German Shepherd stop whining?