The Poodle is one of the most elegant dogs you could ever own.

They are smart, very energetic, and adore their owners to bits.

These dogs are also tiny and are perfect for people living in towns.

When it comes to size, which poodle best suits your lifestyle?

As it turns out, there are three types of poodles;

Because of the constraints of urban living spaces, most pet lovers prefer the smaller versions of the poodle.

These are the miniature poodle and the toy poodle.

Since both dogs are almost identical, it can get a bit confusing deciding which of these two fur babies best suits your lifestyle.

Poodles only differ in size. Their appearance, temperament, and lifestyle needs are quite similar. 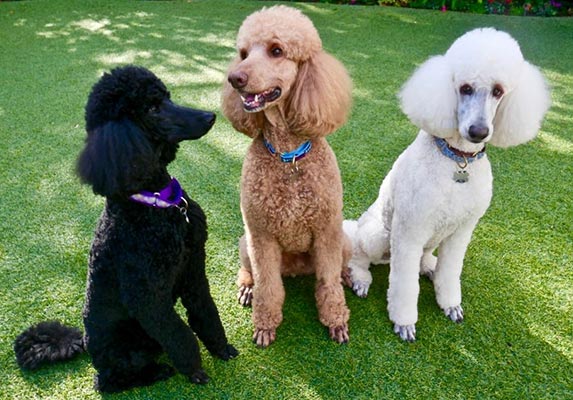 The Standard poodle measures 15 inches to 22 inches tall from the shoulder.

The miniature poodle measures 11 inches to 15 inches from the shoulder.

The smallest of the three is the toy poodle measuring at most 10 inches from the shoulder.

Both the toy and miniature poodles are descendants of the standard poodle.

The Standard poodle hails from the French and initially worked as a retriever dog.

The intelligence and agility of the poodle were quickly noticed by the French nobles.

The poodle soon gave up his hunting days for the luxurious life as a pet for French royalty.

The Miniature poodle is a direct descendant of the Standard poodle.

He became more popular than his predecessor because of his tiny compact body.

By the 19th century, the popularity of the poodle had caught in North America.

The USA bred its version of the miniature poodle and called it the toy poodle. He was solely bred for companionship.

Besides the slight disparity in height, everything else about the toy and miniature poodle is the same.

Both dogs have proportional bodies and a sturdy gait.

They have dark oval eyes and a round head. Both dogs have a long straight muzzle too.

Coat color is similar in both dogs.

You can get the toy or miniature poodles in colors such as black, apricot, blue, cream, and grey.

It is also possible to find a toy or miniature poodle having a combination of these colors.

If you are looking for a sweet and affectionate dog to call your own, you have to get a toy or miniature poodle.

These dogs are loved for their intelligence and people skills.

Toy and miniature poodles thrive better in a family setting.

They love to be petted and pampered by everyone.

In return, they will offer their unconditional love and loyalty.

Poodles are known to create strong bonds and they can be very protective of their owner.

They will bark at anyone or anything that intrudes into their space.

Poodles show little to no aggression towards family members or pets they live with.

But this little fellow can be aggressive towards strangers.

With early socialization, poodles can grow to be warm towards strangers.

If there is one thing the miniature and toy poodle have in common, it is their love for fun.

Do not let their tiny bodies fool you, they have lots of pent-up energy that needs expelling.

Exercising should involve activities that challenge the poodle physically and mentally.

Poodles love to play a game of fetch.

This helps activate their instinct to hunt and retrieve things.

So if you have a Frisbee at home, you will make your poodle happy.

Since they used to retrieve games from large masses of water, they developed a water-resistant coat.

Sometimes your poodle may retrieve things you don’t want them to while playing fetch. With early training, your poodle will quickly learn to stick to the Frisbee.

Also, invest in games that engage your poodle’s brilliant mind.

Hide and seek is a favorite game for them.

You could also get a puzzle toy like a maze treat-dispensing toy.

This should keep your poodle busy as they try to figure out how to get the treat from the toy.

Always update your games to keep your poodle’s mind engaged.

Never forget that a bored poodle is a destructive poodle.

As you engage your poodle in play, be careful not to exhaust him too.

Toy poodles are especially prone to heat exhaustion due to their small bodies.

Always know when your poodle has had enough and needs to take a breather.

Early signs of exhaustion include;

Training is important if your toy or miniature poodle is to grow into a well-behaved dog.

Bear in mind that poodles descend from royalty so they tend to carry themselves with an air of importance.

If you do not establish dominance early, the little fellow will likely overpower you with his personality.

Start training your poodle when he is a puppy.

Teach them obedience commands like sit, stay, or come.

This should help establish your authority.

Always use positive reinforcement and doggy treats to motivate your poodle to obey commands.

Poodles have fragile egos so you should never physically punish or use harsh words while training them.

Poodles have a short curly coat that is water-resistant.

The best part is that they are minimal shedders which makes them perfect for apartment life.

Grooming involves brushing their coat once or twice a week to get rid of pet dander and prevent matting.

If a poodle’s coat grows too long, it is advisable to trim it short.

Clean the poodle’s teeth as well to prevent dental diseases. Clean the eyes and ears as well and trim the nails short.

If you are still debating the difference between the toy and miniature poodles, the answer is that both dogs are quite similar.

Size is the major difference between these two dogs.

It all boils down to personal preference when deciding which poodle to get.