What is the first thing that comes to mind when you hear German Shepherd or Pitbull?

Probably images of two gruesome dogs that will terrorize anyone who messes with them.

But these two breeds are such gentle giants that choosing between German Shepherd vs Pitbull is no easy task.

German Shepherds are gentle and affectionate dogs although they can be standoffish towards strangers. Pitbulls, contrary to popular belief, are very affectionate and playful. Both dogs are intelligent and require constant training to produce good behavior.

Ever wondered what the difference is between a German Shepherd vs Pitbull?

The two dogs have different body structures, coats, and temperament.

But they also have similarities that make choosing between them hard.

Before we compare the two, we have to debunk one common myth about them- that they show aggression to everyone.

That is far from the truth as you are about to find out. 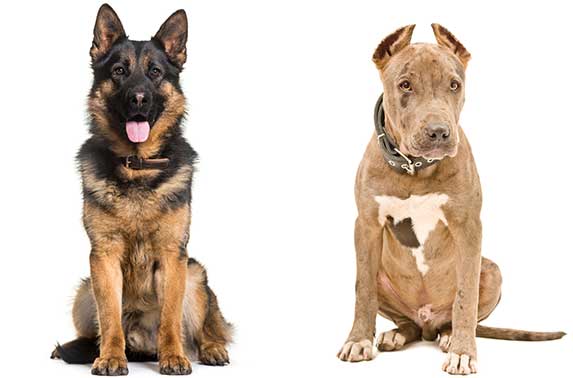 They worked the fields, helped in hunting, and took up any other job that employs their brains and brawn.

Because of their popularity, several breeders have tried to advance them into bigger and more intelligent dogs.

Side Note: Peep our list of common dog breeds that are mistaken for German Shepherds.

Pitbulls are a mix between the standard English bulldog and the American terrier.

This makes him both an English and an American dog.

In America, he goes by the name English Pitbull Terrier but that is often shortened to Pitbull.

The Pitbull’s history is not as happy as the German Shepherds.

Pitbulls were bred for bull-baiting, a gruesome sport that involved fighting a bull in a cage to the death.

This is where the myth that Pitbulls are naturally aggressive was born. 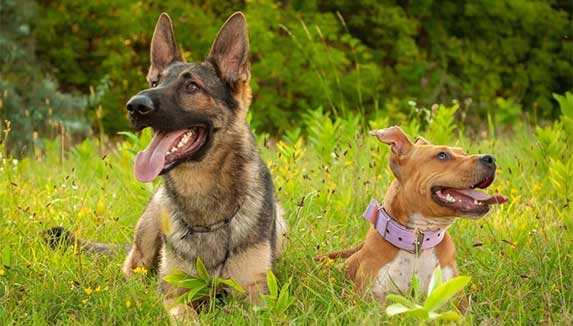 It is easy to tell these two robust breeds apart.

The German shepherd has a sloped back with hind legs stretched far back.

According to breeders, this posture increases the dog’s poise and performance.

Also, the German Shepherd has a signature black & tan or sable colored coat.

The Pitbull has a broader face with large jaws and dark round eyes.

Compared to German Shepherds, Pitbulls are brawny and with a stockier gait.

Pitbulls have a variety of coat colors too with the popular ones being fawn, red, and blue. 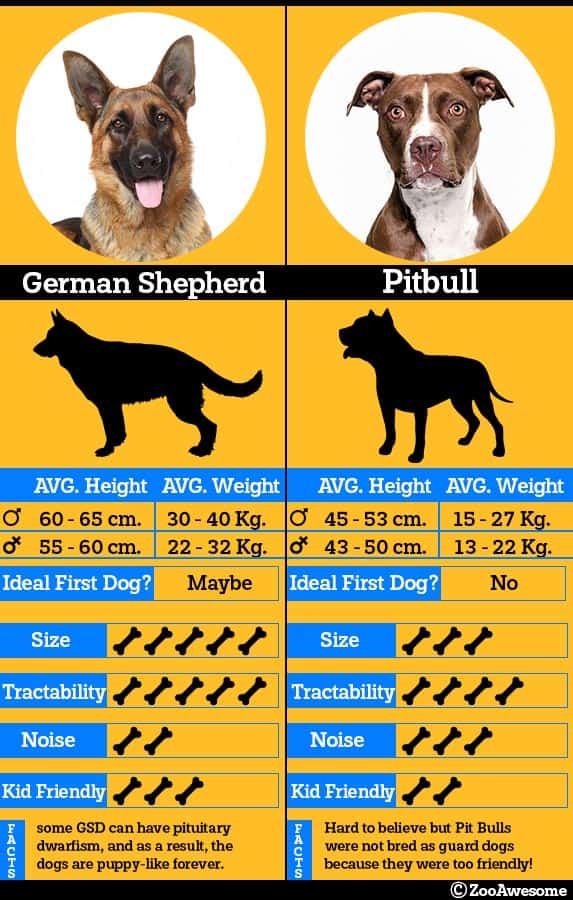 Despite their bully bodies and mean facial expressions, both the German Shepherd and Pitbull are truly gentle giants.

They are prized for their affection and loyalty to their owners.

If a German Shepherd or Pitbull is aggressive towards people, chances are they are the product of an irresponsible breeder or owner.

They may be big and burly but they are very playful and often clumsy.

A well-raised pitbull is friendly to everyone.

He will run to you for a pat on the head followed by showing you his goofy antics.

A German Shepherd is a complete opposite.

Though he has a friendly side, he is very suspicious of strangers.

He will not run to a stranger right away but would size them up first.

Once they establish you are not a threat, they will invite you to pet them.

But even then a German Shepherd will still hold some suspicion over you.

If you are going to own a German Shepherd or Pitbull, be prepared to give them lots of exercises.

Constant mental and physical stimulation is necessary to keep both breeds happy.

A German Shepherd is an active and very intelligent breed.

They thrive in high energy games that involve lots of mental and physical engagement.

Designing an army-style obstacle course for them at home would get them all the exercise they need.

If that is too much, a good old game of fetch is enough for a German Shepherd.

This furry fellow also likes tug of war and any other game that helps hone his stamina.

German Shepherd Whining -How To Prevent It?

Pitbulls will thrive in any game you engage them in.

Whether it is a tug-of-war, hide n seek, or up and downs, they are good to go.

Pitbulls love being clumsy so any game that brings out their goofy side is fine.

When it comes to training, you need to exercise authority on both dog breeds.

A German Shepherd submits to authority easily and requires consistent training to maintain its great qualities.

Also, German Shepherds are known to mirror whatever their trainers do.

Show strength and your German Shepherd will show the same.

Pitbulls equally need a strong and authoritative person to train them.

They respond to training well although they can try to be clownish even during training.

Putting your foot down is necessary with this breed. But be gentle and not hurt a Pitbull’s fragile ego

Both the German Shepherd and Pitbull thrive on a similar high-quality diet.

If you can, feed them a raw diet filled with lean meat and meaty bones.

A little organ meat is healthy too because it packs lots of Omega 3 and Omega 6.

If you are trying to decide between a German Shepherd vs Pitbull for a family pet, they both are great dogs to adopt.

If you live in an apartment you have to check with the management if they allow Pitbulls in the vicinity.

But if you have your compound, either of these two dogs will make a great pet.

Purebred German Shepherds and Pitbulls should leave healthy lives if they are fed and exercised right.

But as they age, they are susceptible to a few hereditary diseases.

Regular check-ups will help identify early symptoms of disease in your Pitbull or German Shepherd.

The German Shepherd and Pitbull are both great family dogs if they are trained and socialized early in life.

If you are choosing between German Shepherd vs Pitbull, remember one is outgoing while the other remains suspicious of strangers.

If you live in the city, find out if your apartment allows large breeds like the Pitbull in the vicinity.

German Shepherd vs Pitbull, which one is friendlier?

German Shepherds are generally reserved and will take time to warm up to you. Pitbulls on the other hand are friendlier to anyone who shows them attention. Early socialization helps bring out the friendly side of both breeds.

Can a German Shepherd Fight a Wolf?

A German Shepherd that is big and strong can fight a wolf. Dog breeds like the Kangal Shepherd Dog were bred to fight wolves. In Southern Africa, the Rhodesian Ridgeback dog could take down a lion.

Can a German Shepherd Fight a Pitbull?

German Shepherd vs Pitbull, which bite is stronger?