From childhood, we are taught dogs and cats simply don’t get along!

Thanks to cartoons like “Tom and Jerry”, this is supposed to be common knowledge.

The simple fact is, these are both predatory animals.

Dogs are descended from wolves, who would “prefer” to focus on hunting weaker animals.

Hunting cats learned to survive by avoiding larger predators, in this case, dogs (from their perspective).

A cat either hiding, running from, or showing aggression to a dog makes perfect sense.

On the flip side, many dog breeds were bred to chase or herd, instinctively wanting to chase a fleeing cat.

In reality, these animals can learn to happily tolerate each other through steady socialization training!

A young kitten raised around a well-socialized dog will learn not to fear this dog, won’t run from it, or react defensively toward it.

A puppy introduced to cats through happy, pleasant, and rewarding experiences will learn not to become aggressive or fear the cat.

How to Stop Dog Aggression Towards Cats? 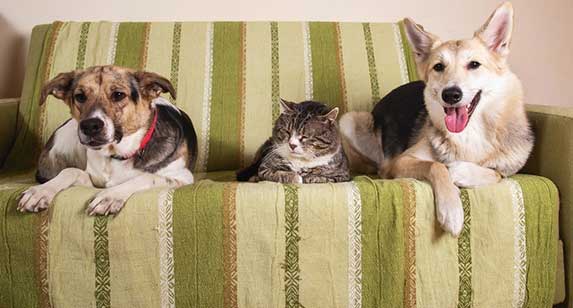 If you care for a cat that doesn’t like being around dogs for whatever reason, don’t force interactions.

This might only cause unnecessary stress for either animal.

Compared to dogs, cats can generally become stressed easier, and don’t always respond to changes in their environment well.

Dogs are naturally social animals and ultimately would prefer to consider the cat a “member of the family”.

If they’ve either learned to consider cats a threat or have never encountered one until later during their lives, forcing interactions could be a bad idea.

Most dog breeds are larger than today’s domesticated cat and might become dangerous to the kitty if they feel threatened.

For example, a cat darts from hiding and claws a dog across the face.

If you are able to teach both your cat and dog they only can benefit from spending time with the other, they won’t ever have any reason to respond aggressively!

Start socializing both animals at an early age, and be sure to reward them for pleasant interactions.