Coconut ice cream is safe for dogs if it has pet-friendly ingredients.

Also, dogs that are not lactose intolerant can have coconut ice cream.

Coconut ice cream is safe for dogs if served in moderation.

But if your dog is lactose intolerant, coconut ice cream may not be an ideal treat for him.

Is ice cream safe for dogs? 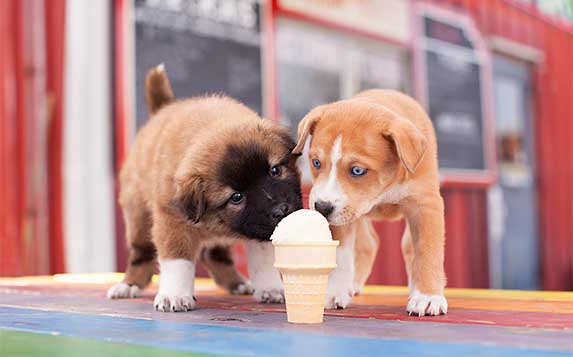 The base ingredients for ice cream include milk, sugar, and cream. Unlike humans, dogs stop processing milk when they are weaned as puppies.

An adult dog is likely to develop tummy problems from eating dairy products like ice cream.

Besides milk, there are other ingredients in coconut ice cream to watch out for.

Avoid giving your dog coconut ice cream if it contains;

Chocolate contains theobromine which may be difficult for dogs to digest.

Instead, excess theobromine will cause side effects such as;

In high amounts, caffeine has the same side effects as chocolate poisoning in dogs.

Never feed your dog coconut ice cream with both chocolate and caffeine in it.

It can lead to seizures or, worse, death.

Commercially processed coconut may have less nutritional value for your dog.

It only adds flavor to the ice cream and contributes less to your dog’s health.

Furthermore, processed coconut that has artificial additives may be harmful as well.

Dried grapes or raisins are toxic to dogs if used in coconut ice cream.

In large quantities, chemical compounds in macadamia nuts can cause seizures and muscle weakness.

Artificial sweeteners like Xylitol can cause an insulin-spike in dogs.

This is not healthy, especially for diabetic dogs. High amounts of xylitol in a dog’s blood cause hypoglycemia.

Early symptoms of hypoglycemia in dogs include; 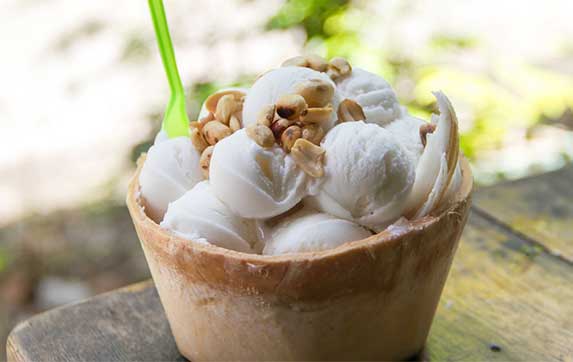 There is an alternative to coconut ice cream that is safer for dogs.

For instance, one can blend peeled bananas and coconut and freeze the mixture into tiny healthy treats.

Also, fermented milk like yogurt is healthier and friendlier to a dog’s digestive system.

Use unsweetened yogurt which has less sugar and more proteins for dogs.

Pour the mixture in an ice tray and chill until frozen.

Once frozen, scoop and serve one or two frozen treats a day.

Coconut milk can be used instead of raw coconut. Besides, bananas, other healthy fruit options include;

Also, you can add spices like turmeric powder which reduces inflammation in dogs.

Parsley and basil are safe for dogs as well.

Coconut ice cream is not harmful to dogs if served moderately.

However, be careful of harmful ingredients in coconut ice cream- like chocolate and caffeine- which are not healthy for dogs.

Frozen fruit treats are healthier and safer for dogs than ice cream.