The Irish Setter lab mix is an intelligent dog that every family should own.

He is the offspring of two brilliant canines that have proven their grit throughout history.

If you are looking for a goofy furball that is low maintenance, look no further lab setter.

What exactly is an Irish setter lab mix?

This canine belongs to a group known distinctively as designer breeds.

A lot of people confuse this fine furry fellow for a mutt.

Mutts are dogs whose pedigree is not known.

The lab setter is a cross between two purebreds, a Labrador retriever and an Irish setter dog.

This cross has produced an excellent hybrid dog with an incredible personality.

Because designer dogs showed up about 20 years ago, there is not much history for this guy.

Fortunately, we can glimpse into the history of both his parents.

The Labrador retriever is a descendant of Newfoundland, Canada.

He has been around since the 15th century working as a hunting dog.

This dog also helped fishermen with their catch.

For this reason, he developed a water-resistant coat, webbed paws, and an Otter’s tail.

Though the modern-day retriever is no longer a hunter, he has maintained some of his best physical attributes and personality. 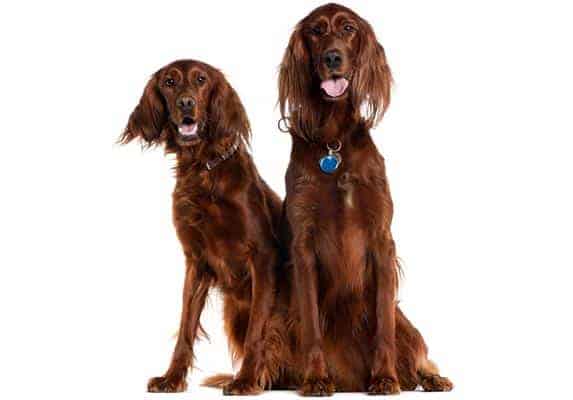 The Irish Setter hunted the countryside of Ireland long before guns were invented.

Hunters relied on his impeccable sense of smell to flush out prey.

When guns came into the picture, the Irish Setter took the honorable title of gun dog.

He would sniff out prey and lay flat on his belly as a signal to his owner.

The Irish setter dog still works as a hunting dog to date.

He has also been assimilated into a family dog thanks to his charming and lovable personality.

The labrador retriever and Irish setters have near similar body structures.

So you can expect an Irish setter lab mix puppy to have a wedge-shaped face with a long muzzle.

The ears will be floppy and the face calm and collected like both parents.

Coat color is dependent on which parent has the dominant gene.

If a lab setter inherits a retriever’s coat, expect him to look like chocolate, yellow, or black lab English setter mix.

If the coat is that of the Irish setter, it will have a tan, Chestnut, or Mahogany color.

Other possible color variants are silver and white.

Height also depends on which parent the lab setter takes after.

He could measure 25 inches from the shoulder and weigh 80lbs like the labrador.

Because labs tend to gain weight fast, lab setter mix also has the potential of weighing more than 80 lbs.

If we combine the amazing qualities of the Lab and Irish setter, we can begin to understand the personality of this hybrid dog.

Early socialization and training help unlock the best version of the lab setter mix while pruning out the undesirable traits.

His natural hunting instinct is still intact and will come alive when playing hide and seek or when hunting for wild rabbits together.

This dog is full of energy and is always happy to tag along to any adventure you are planning.

Both the retriever and setter are celebrated for their calm and affectionate nature.

You will also notice this sweet side in the lab setter as he interacts with strangers, children, or other pets in the house.

He will gladly play with kids as he watches over them.

If the lab setter mix leans towards his Irish setter side, he will always want to help with chores in the house.

He does not mind helping with laundry, carrying grocery bags, or fetching the newspaper every morning.

This dog is hardworking and always eager to please its owner.

He is perfect for a family that leads an active lifestyle.

An Irish setter mix combines the energetic and athletic nature of two breeds.

This means he will need plenty of exercises to release pent-up energy.

Find him exercises that challenge his muscles and brain.

If he takes after the lab, he will not mind going swimming or fishing with the family.

Also, he enjoys hiking or playing a game of fetch at the dog park.

Any game that involves running around or tearing through obstacles to get to the prize will excite a lab setter.

Always find time to exercise your Irish setter lab mix. This hybrid dog can develop the habit of chewing things, like a lab, when he gets bored.

Combining the genius minds of the lab and setter, an Irish setter lab mix should be easy to train.

He is also eager to please his master and will work hard to grasp commands quickly.

Start socializing the dog to new sites and smells when he is a puppy.

Invest in toys that will keep a lab setter busy.

Chew toys can help redirect his initial intention to chew through your sofa or shoes.

Doggy puzzle toys are also great for keeping the lab setter’s mind engaged while you are away.

Do not forget to potty train your lab setter puppy to avoid stinky accidents all over your house.

Fortunately, an Irish setter lab mix dog is a moderate shedder so grooming should not be all that involving.

Brushing his coat twice or thrice a week is enough to get rid of tangled hair and pet dander.

If the coat leans toward the Irish setter parent, you may have to brush it daily to maintain the same shine.

Treat your lab setter to an occasional pedicure session as well.

This keeps the nails short preventing them from breaking.

You will also have to clean under the floppy ears to get rid of moisture, wax, and bacteria.

Is an Irish setter mix dog for you?

He is loyal to his owner and gets along with everyone, including fellow pets.

If you live an active lifestyle and want a furry animal to tag along to your escapades, a lab setter mix is the perfect pet for you.