While a floppy-eared German Shepherd is adorable at best, some may wonder if it’s a reason to worry.

German Shepherds, especially purebreds, have their ears standing up.

However, they are not always standing up from birth.

German Shepherds as puppies usually have floppy ears as their bones and muscles have not been fully developed at that stage. Only when these puppies have finished teething, which usually takes around 20 weeks, their ears will start shooting up.

This is as once they have grown with enough nutrition, they will develop stronger cartilage which will help hold up the weight of their ears.

Once their ears have started perking up, they will likely remain up for the rest of their lives.

But what if their ears do not shoot up on their 5-month mark?

Read more to find out what it means and how to fix it!

German Shepherds are largely known and recognizable for their erected ears.

Their ears are usually medium in size and carried upright.

However, bad trauma or health problems in their early stages may also affect your dog’s ability to have upright ears.

Before their ears start standing up straight, their ears may go through weird stages of growth.

While your pup is growing, their ears are also growing.

This means that their ears during this stage may flop up and down over a few days.

This process should not alarm you as it means that their muscles and cartilages are still developing.

As all German Shepherds are different, the time taken for them to develop strong upright ears will differ too.

Do remember that their ears should go up naturally, and it is common for one ear to develop faster than the other, causing only one ear to have flopped.

What If My German Shepherd Has Floppy Ears At 9 Months? 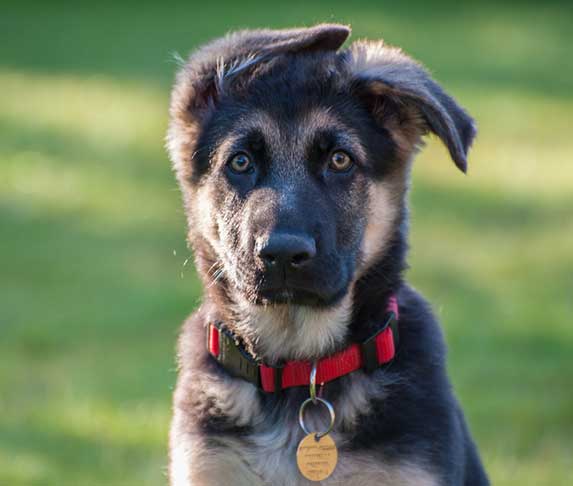 Thus, if your 9-month-old German Shepherd still has floppy ears, it should not raise any worry.

It is also not unhealthy for your pups to have flopped ears.

As strong cartilages are needed for them to stand up, your puppy might be slow in developing and need a little more time for their ears to be erected.

Although some pups might take longer for their ears to be erected, some might not erect at all.

There are a few reasons for this cause, including:

While some of these causes can be prevented, others can’t be controlled.

Genetics play a big part in your German Shepherd’s physical appearance, including their ears.

If your pup carries genes for ears that do not stand erect, they will more likely have flopped ears for their whole life.

If breeders decide to breed parents with large erect ears, their puppies will most likely follow suit and have large and erect years.

Some buyers prefer these ears and may choose these pups instead while purchasing one, especially for show and aesthetic purposes.

If your pup is mischievous and is a little clumsy, they may get into physical accidents which might damage their ear cartilage or muscles.

This may cause long-term damage and may not stand up naturally.

Physical damages may also happen if your pup plays rough with other animals.

To protect your pup’s ears from physical damages, remember not to pull, tug or twist their soft ears and protect their growing bodies.

If you notice that your pup has been in an accident that may potentially damage their ears, you should take them to the vet immediately.

Especially during crucial stages of your German Shepherd’s life, proper nutrition is essential to help them grow.

This includes giving them vitamins and minerals that can help develop their ears.

Improper nutrition may hinder their growth, especially in their ears. Talk to your vet to get a nutrition plan for your pup.

As dirt and built-up can be common in German Shepherds, regardless of age, remember to clean your dog’s ears to make sure their ears do not get infected.

Dirty ears may also stun the growth of your pup’s ears and cause them discomfort which will result to excessive scratching that will damage their ears.

While you should not stick anything down their ears, you can clean your pup’s ears by washing them with a warm and damp cloth.

Alternatively, you can use special cleaning wipes that are meant to clean dog ears.

If you are still worried about your pup’s ears not standing up, there are a few ways to help quicken the process.

One way you can assist your German Shepherd’s ear development is through ear taping.

This means wrapping your pup’s ear around the foam and taping them together.

Another way to tape their ears is by using a stick and propping it horizontally.

Remember to retape their ears regularly and remove them once in a while to help their ears stand on their own.

When taping, do note shove sticks up their ears, or risk permanent damage and injuries!

Taping their ears would mean that you will have to inspect their progress weekly.

Take them off and see if their ears are able to stand by themselves.

Further, look for any soreness through this method.

Do not keep taping their ears if you notice any sores.

Remember to use the right tape to help your German Shepherds stand and to prevent any problems.

Taping your pup’s ears is not bad if done correctly.

If your pup’s ears are still not perked, do seek a vet’s assistance.

If your German Shepherd pup has not fully developed its ears yet, it is not something you should worry too much about.

There are many causes to this and many ways in which you can help your pup develop its ears.

Do remember to check with your vet if you notice anything unusual.