Our homes were not necessarily made for dogs, meaning that stairs, beds, and couches weren’t built to suit their needs as they were for ours.

While plenty of our pets can adapt to jump onto them and get down safely, not all of them possess that skill set.

Taking that into consideration, it’s almost inevitable for a dog to fall off a bed or couch at least once, but that doesn’t make the situation any less scary.

Everyone’s heard the ancient saying “a cat will always land on their feet”, and in the right conditions, it’s mostly true.

This might cause the curious dog owner to question that if cats are able to be so dexterous, why can’t dogs do the same?

In short, a cat’s anatomy allows for them to perform movements with their back that just isn’t possible for a dog to replicate. However, understanding your dog’s capability when it comes to climbing and jumping can better help you make sure you’re not putting your pet in an overly dangerous situation.

It’s also useful to know how durable your pet can be, and what signs to watch out for in case of physical injury.

How Agile Are Dogs? 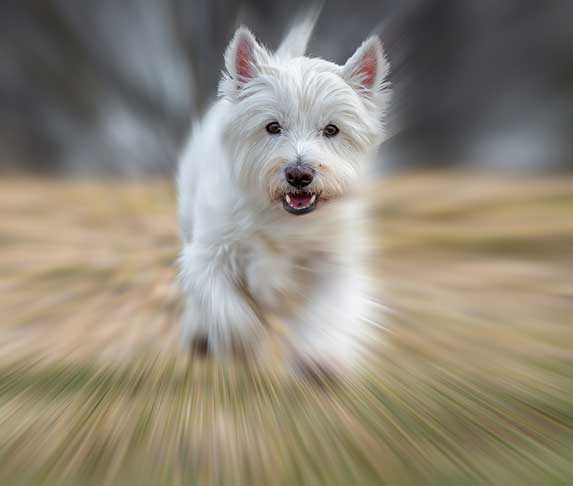 As anyone who’s seen a dog show would know, some canines can be incredibly dexterous and agile.

Much of this physical prowess depends on lifestyle and training, most dogs can learn to navigate obstacle courses and perform tricks.

Although some of it does depend on breeds.

Some dog breeds were specifically made to be proficient at athletics.

But that doesn’t mean that any simply can’t train enough to grow stronger and faster.

Common ways a dog’s physical prowess is tested are:

Intelligence also has a role to play in all of this.

Especially when it comes to the complexity of some of the obstacle courses (in dog standards, at least).

Coincidently, some of the more athletic breeds like border collies, corgis, and sheepdogs are also commonly used for herding.

So while a dog’s athleticism is nothing to scoff at, it’s simply not used in the same way a cat is.

When a dog falls, it’s usually because they were attempting to climb onto something out of their reach, and fell in the process.

Some canines can be impressive jumpers.

But as stated before, furniture is not always designed to be easy for dogs to jump up onto.

Climbing, for most dogs at least, is not a strong suit for them.

While they certainly have the capability too, they’re able to recognize that their bodies aren’t necessarily made for the act.

Their claws, for example, might be thicker than a cat’s.

But they don’t have the edge they need to puncture wood.

The legs of a dog also aren’t able to wrap around the body of a tree like a cat’s can.

Meaning the process will be much harder for them.

Some dogs have been bred to be able to climb up trees.

But more commonly, they’ve been bred to trap prey up into trees so then their owners can more easily catch them.

Our pets know their own bodies, and more often than not, their own capabilities.

So they understand that if they were to fall, it might not be such a graceful landing.

While dogs can climb, they’re certainly not made for it.

Can You Skydive With A Dog? (What Dog Owner Says)

Why Don’t They Land On Their Feet?

It should be prefaced that dogs can in fact land on their feet, it’s just that their chances of doing so are not as strong as a cat is.

The main difference between the two in these terms is the structure of each of their backs.

A cat is born with a very flexible backbone.

Meaning that it can twist and bend in ways that would do severe damage to any other sort of animal.

Their tail also helps in the movement of twisting their body.

Another anatomical benefit they have is the fact that cats don’t have any sort of functional collarbone, also freeing up their movements.

A dog’s back is far more similar to a human’s, in these regards, meaning that any sort of major bend or twist might end up doing more harm than good in a fall.

Knowing this, a dog most likely won’t put itself in a situation it can’t get out of.

But the possibility of that happening is still somewhat high.

So while it is possible for a dog to land somewhat gracefully, it usually has more to do with luck rather than skill in its part.

An owner should take this into consideration whenever they need to place their dog somewhere high up.

What To Do If A Dog Falls? 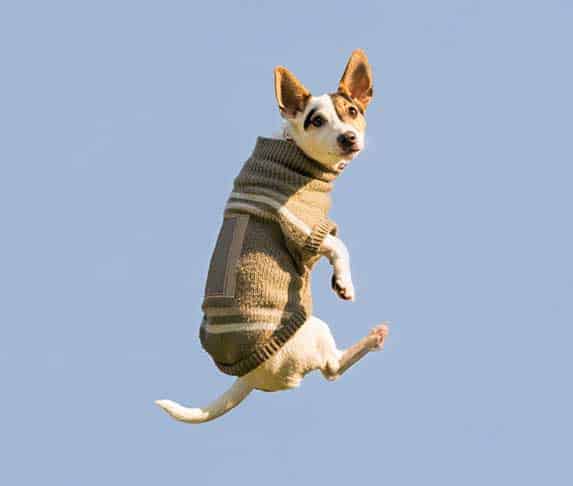 A dog falling is a scary situation, as it might be hard to judge how durable our pets can be at times, we’re unsure of how to hurt they might be.

Since we’re unable to communicate with our dogs the way we can with people, the best we can do when they’re not obviously in pain is watch out for the signs of such.

Doing this can possibly prevent the damage from progressing to much more permanent issues later down the line.

Looking into the breed of your dog might also prove useful in these scenarios.

The first thing one should do is simply observe your dog and touch them as little as possible.

The point here is to look for visible injuries.

A dog flinching when they’re touched in an area might mean some internal damage.

Fast-paced breathing or panting is another sign that they’re in pain somewhere on their body.

If limping occurs for more than five minutes, then it’s time to take your pet to the vet.

Any of these signs are good indicators that damage was sustained in the fall.

After a vet has cleared your dog, it might be time to rearrange furniture so that it doesn’t happen again.

No owner likes to see their dog fall or even be in pain in general.

Luckily, there is much we can do to prevent it.

Understanding what your dog can and can’t do is a great place to start.

As well as taking that into consideration when placing furniture or other items around the house.

So your pet isn’t tempted to put itself in a dangerous situation.

If your dog does end up falling, it’s best to look for signs of injury.

Always be sure to consult a vet if needed.