Cats do a lot of weird stunts in their everyday life.

But have you ever wondered, “Why does my cat’s tail puff up?”.

As it turns out, felines do that to communicate different feelings.

A cat will puff up its tail if it is startled or feels agitated. It happens when the cat is scared or suddenly feels frustrated when playing. Also, cats puff their tails to make their bodies bigger. This helps scare a predator away or a rival cat.

How your cat positions or moves its tail communicates a different emotion they are experiencing. You can tell your cat’s mood just by observing its tail.

A puffed-up tail can mean a lot of things.

It could be a sign of happiness or frustration.

It could also be a warning or a sign that your cat is about to launch an attack.

How you interpret the signals your cat is giving with its puffed-up tail can help you understand its emotions.

Why does my cat’s tail puff up? 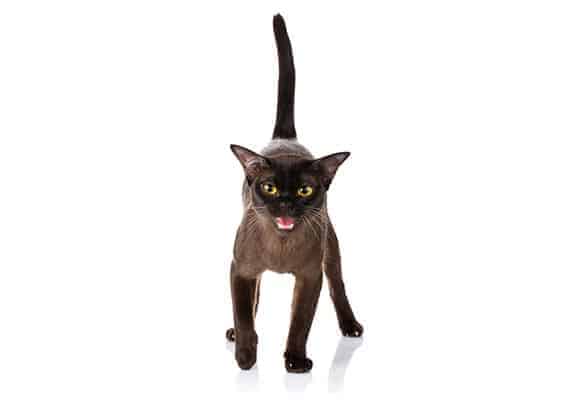 Your cat’s puffed-up tail is communicating a specific emotion.

It could mean that the cat is;

A startled cat would jump away and puff up its tail immediately.

This is their natural response when they are hit with the element of surprise.

When the cat notices it’s you, the tail will go back to normal as you are not a threat.

But what if an imminent threat is lurking?

The cat’s tail will be puffed up and facing down indicating they are afraid.

Also, the cat crouches down with its hind legs as if to make its body smaller.

This is a show of submission especially when a cat meets a more dominant feline.

Cats that have their tails puffed up and afraid will yowl a lot.

Yowling can be a sign of extreme fear and it communicates surrender to a dominant cat.

Not all cats will have their tails puffed up out of fear.

Some cats are ready to engage in combat when instantly provoked.

They will puff up their tail and face it upwards.

The cat will also raise all its legs and try to make itself as big as possible.

An aggressive cat will yowl and hiss to warn an intruder to back off.

If the intruder continues to advance the cat’s eyes will constrict and engage in a bloodcurdling stare down.

The cat may also jolt its body while hissing to invoke fear on a  predator or intruder.

Interestingly, an angry cat will only do this to scare the intruder away.

Cats seldom engage in fights unless they are extremely unhappy.

Puffing the tail does not always communicate negative emotions.

Cats, especially kittens, love to run around with puffed-up tails while playing.

And it is not hard to tell if your cat’s tail is puffing out of excitement.

Normally, the cat will have the ears pointing forward out of curiosity.

The eyes will look relaxed and the tail may swing to and fro out of anticipation.

Cats puff up and swing their tail when hunting but do the same when delivering a playful pounce.

An angry cat with a puffed-up tail will use additional cues to show it’s ready to attack.

The icy stare down will be coupled by ear drawn back.

If the cat still feels threatened, it will raise one paw and bring out the claws.

The pupils also constrict giving your cat a fierce look. Any more aggression and the feline will deliver the famous cat slap on the intruder.

If two cats are about to fight, it is always a good idea to break them up. Cats that are allowed to fight in the home can carry this aggression even in adulthood.

How do you break up a catfight?

If the cats are about to fight on the lawn, grab a hose and spray at them.

They will gladly end their dispute rather than get their coats wet.

If it is in the house, grab a blanket or pillow and throw it at them.

This will startle them and they will run away.

Alternatively, throw a toy to distract the two felines out of their squabble.

Can a puffed up tail mean something else? 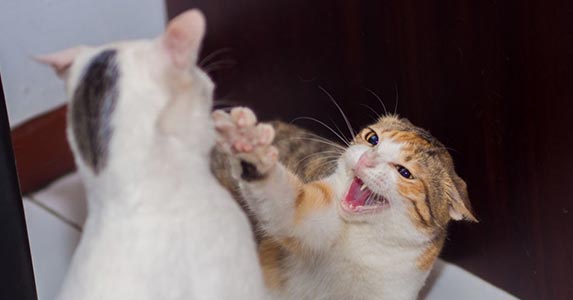 A cat can puff up its tail out of a reaction to a body condition.

It could be sickness or an environment change the cat is adjusting too.

When a cat feels cold, it will puff up the tail to trap hot air from the skin.

This creates insulation that keeps the tail warm.

Sickness can also cause a cat to puff the tail when feeling stressed.

You can always tell if your cat is happy, angry, or feel threatened by how they puff the tail.

If your cat’s tail is puffed up but the feline is showing no emotion, they could be sick or feeling uncomfortable in their current environment.

Always try and make your cat feel better if their puffed up tail communicates stress, anger, or fear.

How do I know if my cat is happy?

Cats are happy if they appear relaxed from head to tail. The ears and tail are relaxed and they are generally vocal. A happy cat also spends most of its time snoozing or working up an appetite.

Why do cats wag their tail when you give them attention?

A cat can wag its tail out of appreciation just like a dog. This can happen when you are having a conversation and fixing a meal for the cat. A cat will also wag its tail in anticipation of a treat or a morsel from your plate.

Why does my cat slap?

Cats slap a lot when playing. But a cat may also slap when in danger. If a cat is chased into a corner it will puff up its tail and rapidly slap at the enemy in defense.

Why do cats thump their tails when lying down?

A tail thumping on the ground is often a sign of irritation. If a cat starts thumbing the tail down while playing, it means they have hard enough and want to go do something else. If the same happens when holding your cat, it means petting time is over.