Over the years that humans have domesticated animals, dogs have exhibited a unique character — obedience.

Dogs are quick at learning and taking simple instructions compared to other domestic animals.

Some argue that this behavior is due to privileges such as food and shelter, but if it were so, why wouldn’t all domestic animals be obedient?

It’s beyond doubt that there’s something peculiar about dogs that triggers the response.

For example, you instruct your dog to sit down and give the same order to any other domestic animal, like a cat. The dog will be quick to obey. Why are dogs obedient to their human masters? Obedience is a natural behavior for pack animals such as dogs.

Dogs are pack animals who naturally, depend on one another for survival and are always led by a leader. When dogs are domesticated the pack mentality makes them perceive the human being as a leader, so they become loyal.

Factors such as training are proven causes for dogs’ obedience.

Human beings have been training dogs for many years now, which enhances their character.

In this blog we shall look at other reasons why dogs obey humans: 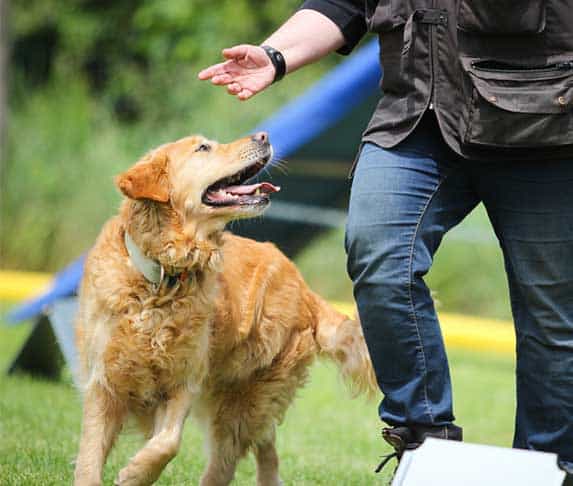 They are pack animals and they view their owner’s families as their pack.

They love attention, so they will obey their human masters because they want to feel loved and accepted.

Human response to a dog’s behavior can reinforce obedience.

When you reward a dog for behaving well, you create a positive association in his mind, he will be more likely to repeat the behavior.

When you reward your dog after positively responding to orders to stop barking, the dog is more likely to obey you next time.

However, not all treats are appropriate at all times.

For example, when you take your dog for training after he has had his meal, then give him food treats such as chews, you won’t get good results.

To instill obedience in your dog through positive reinforcement, give him the right treats at the right moment.

Dogs know how to play the game of rewards, after going through some training.

They become smart enough to learn a few things that result in good consequences.

They obey us to for a treat!

For instance, if they learn that being quiet after receiving a command to stop barking results in a treat, they will be motivated to be submissive to such a command next time.

Why Do Dogs Make Noise When They Yawn? (Whining & Squeaking)

4. Humans Talk To Their Dogs

Dogs are among the few animals that show the ability to be trained and receive verbal communications.

They have demonstrated the ability to perceive syllables like a two-year-old child, this is why they grasp basic commands.

Dogs perceive basic commands that are short worded, such as “sit”, “down”, and ‘”stop it”, after training.

5. Dogs Love To Please Their Owners

Another reason why dogs obey humans is simply to please them.

Human owners feel excited when their dogs submit to them.

The dogs can tell the mood too.

For example, when your dog senses your excitement when he obeys a command to come to you, he is more likely to do the same thing next time. 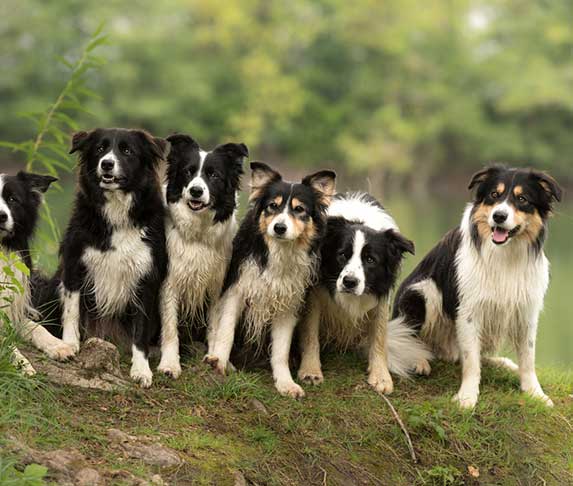 Obedience to a leader is one of the survival techniques for pack animals.

Every pack has a leader, and the rest are submissive or dominant.

Every member of the group is supposed to be obedient to get protection and a share in the hunted food.

The pack mentality causes dogs to follow humans as leaders.

It is further enhanced by the benefits that dogs receive from humans such as food, shelter, and protection.

7. Humans Have Been Dogs’ Masters Since Ancient Days

In the ancient days, humans domesticated dogs for purposes such as hunting and herding livestock.

This experience taught dogs to be obedient to their human masters to receive rewards such as a share of the game meat or praise.

Therefore, obedience is an adaptive technique that dogs learned long ago and transmitted to other generations.

Though we’re living in modern days, our dogs obey us because that’s just natural to them.

Dogs are pack animals who have a leader over them for protection purposes.

This perception makes dogs regard their human masters as superior to them.

They feel protected when they’re around their masters.

Dogs feel that the sound their masters make scares off potential dangers.

Therefore, dogs will obey their masters to continue enjoying the sense of protection.

9. Humans Give Them Their Needs

Experts have it that all domestic animals are smart enough to tell the benefits they receive from their masters, though they may not express it.

Dogs are social animals who show appreciation to their owners through obedience.

They hold their human masters in high regard because of the provisions they receive, such as food, shelter, and protection.

Dogs are loyal to their masters because their minds are intelligent enough to process these benefits.

10. They Have Been Training

Well-taught dogs are obedient to their masters.

If you train your dog to behave in specific ways, he’ll do what you taught him.

Make observations then you’ll agree with me that nearly well-behaved dogs have undergone some training.

It’s easier to instill manners in your dog when he or she is still a puppy.

When a dog grows into a young adult, it would be hard to take in something new.

The phrase “you can’t teach an old dog new tricks” applies, even in these modern days.

They crave human company and are naturally obedient.

They also appreciate their human masters for the benefits they receive.

Even so, dog owners influence their dog’s characters.

You teach your dog manners, then he’ll obey you — ignore it, and he’ll disobey you.

It’s better to start training your dog the specific behaviors you want when he’s still in his puppy stage!