When it has to do with communication, a dog’s conversation is always clear and consistent, whether communicating with other dogs or people.

One of the most common canine poses that a dog exhibit is lying on its back with all four legs raised and swinging in the air.

It is crucial to consider the circumstances and examine the whole body first to deduce the silent message that the upside-down dog is conveying.

Dogs shake or kick their paws when they are scratched due to something known as the scratch reflex. This activates the nerves beneath his skin which are connected to his spinal cord and sends a message to the muscles in the legs to kick in an effort to get rid of the irritant.

Observing a dog roll on its back and revealing its belly for air is relatively common (and fun!).

Traditionally, it has always been seen as a gesture of submission, but there is much more to it in reality.

Here are some of the reasons why dogs open their legs when petting them and sleeping: 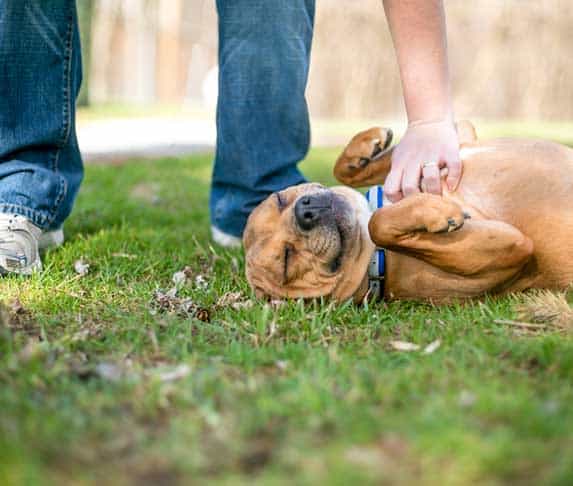 For a dog, that magical spot starts the scratch reflex which is the point of reaction to touch.

This is actually caused by a network of nerves beneath your dog’s skin, which sends messages to the spinal cord.

So long as your dog is not showing any other signs of distress or discomfort, he is probably enjoying a good scratch.

When you pet your dog and he puts his paw on your leg or arm, it’s like petting you.

While most dogs can’t or won’t pet you back, by putting their paw on you they can express affection, trust, and signs of closeness.

This creates a stronger bond between you.

They love it when you scratch their stomach. It is also a sign of confidence.

They are comfortable with you and trust you.

They may also have subconsciously realized that it looks really cool to us when his paws are in the air, and they may be using that to their advantage.

Furthermore, giving a dog a belly rub is helpful to him.

If you think about a dog’s skeleton for a moment, it’s obvious that it would be very difficult for dogs to scratch if they had an itchy back.

As such, the only effective way to relieve this itch is to lie on their back and rub the itchy area over whatever surface they are on, whether it’s on the lawn, on the couch, or on your bed.

Therefore, if your dog develops an itch as you rub his belly, he gets the best of both worlds.

4. To Protect an Injury

Raising the front paw is usually an attempt by your dog to let you know of an injury.

This is because when a dog has joint pain, leg injury, or a broken leg, it often elevates the affected limb to avoid putting pressure on it.

5. An Act of Submission

It’s a healthy form of submission because your dog wants to appease you, even if some of its behaviors bother you.

Dog bending its butt in the air, or “wrapping” its body around your legs are also acts of submission.

They tend to do this when a larger, more aggressive dog threatens them, in which cases it is essentially saying, “I recognize your superiority, please don’t hurt me.”

However, in your case, it is saying, “I am at your service.”

Show him love and he will be a very excited dog. He is trying to please you, showing him that you will please him. 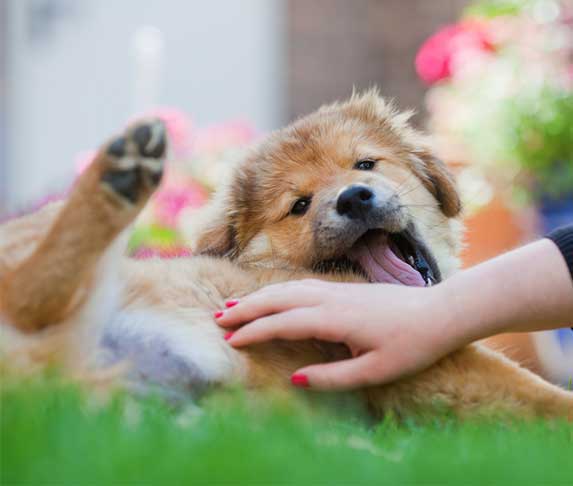 This sign of calming down may indicate anxiety or excessive excitement.

Especially if accompanied by urination, a bent tail, or an exposed belly.

Relaxed and confident dogs generally greet with a wagging of their tails, an open, relaxed mouth, and an overall playful and relaxed posture.

7. It Is A Fun Movement For Dogs

It is well known that the one thing your dog values ​​above all else is the time they spend with you — their owner.

If you are stroking or tickling their stomachs, the sheer euphoria they feel from flooding them with your attention is enough to bring out their submissive side and makes them vulnerable to you as their owner.

When your dog is lying on its back with its feet in the air, it likely means that he is feeling safe, independent, and comfortable in his environment.

When a dog reveals his stomach, he feels safe and is usually confident.

You probably won’t see your dog sleeping like this outside.

This kind of weakness is a compliment to you because it tells you how much he trusts you.

9. To Convey a Sense of Comfort In His Environment

Confident adult dogs in their homes roll on their backs and take a comfortable position when sleeping, usually on the couch or in their bed.

Some dogs sleep on their backs with their legs in the air — this indicates that they are completely comfortable in their environment.

10. To Take In The Cool Breeze On Hot Days

Although dogs try to regulate their body temperature by panting, some may stand by a fan or air conditioning vents on hot days to trap cool breezes on their stomachs.

As they tend to have less hair in an effort to cool off.

Your dog is safe and happy in his space and maybe that’s because you are a great owner and you treat your best friend very well.

The next time you see his stomach raised and his legs open, congratulate yourself for giving a good home to your four-legged friend.