How often do you look into your dog’s eyes and think of how amazing it would be if they could talk back to you?

There is no pet owner who, at some point, has not had that wish.

It has always been a fantasy scenario that one can talk to a pet.

But it has been found out that canines have always been able to speak to humans and not just through their whines and barks.

Dogs stand up on two legs for various reasons. Some of the time, your dog may be excited or simply want to command your attention. In some other cases, they could wish to play and stand on their two legs to signal playtime.

It also depends on whether they do it with humans or other dogs because it could mean something different for both scenarios.

The four-legged pets have specific ways of conveying their needs and moods through their body language.

The University of Salford’s researchers in Manchester have for an extended period been working on translating gestures made by dogs as well as their behaviors.

And they have come up with quite interesting and adorable finds.

What are the reasons why dogs stand on two legs?

Dogs take different postures from eating, sleeping, and all other activities they do in between.

A dog standing on two legs cannot go unnoticed as it is not considered too familiar.

There are quite several reasons why they do this, and it differs from environment to environment, as explained below: 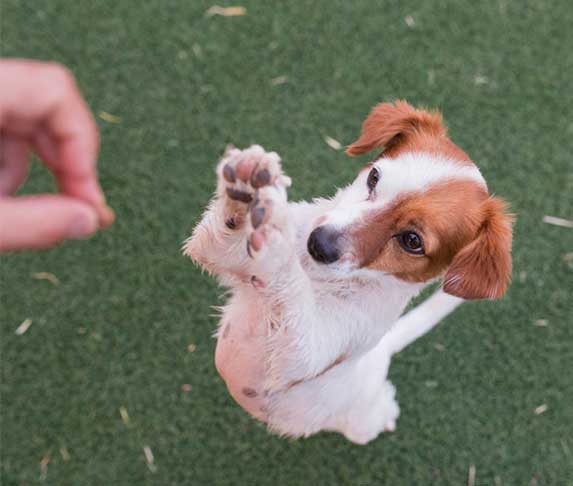 Dogs love looking at humans, especially those that they have a connection.

They are always curious about what their owners are doing, wondering whether they will be given treats.

Whether the owner is getting ready to leave the house, or providing them with some behind-the-ear scratches.

After all this watching, it is only understandable that they would also want to draw your attention towards them somehow.

By standing on their two legs, they are sure that they cannot go unnoticed.

It may be that they are trying to let you know that their water bowl is empty, or they are hungry or need to go outside.

Considering dogs are mostly hungry, they may have done that and gotten fed in the past, and for that reason are hoping you do so again.

Whatever the need for attention, it is only fitting that you give your dog the attention it is asking for as they spend almost all their time giving you their undivided attention.

2. To be at eye level with you

It is no lie that most dogs are the world’s biggest cuddlers.

They love cuddling, hugging, back rubs, tummy rubs, anything that involves physical touch and shows affection.

Along with this, they also love looking at their owners in their eyes.

I mean, even humans prefer to maintain eye contact when talking to a loved one.

In the same way, dogs love to rest their heads on their owners’ heads and just look into their eyes or even hug them.

Because it is almost sure that you humans will always be taller than dogs, adult humans at least, dogs may stand on two legs and support themselves on your shoulders to be able to be at eye level with you and simply enjoy being in your presence.

This is a sign of affection and a sign that your dog simply wants to bond with you.

Do not be hasty in pushing him away. Allow your dog to bond with you and make time to pet him and cuddle him.

This is seen especially in the younger puppies. They love being carried around.

If you are a dog owner, you can confirm that there have been times that your puppy has made you carry him around, although the whole idea was that you were taking him for a walk.

Other than whining and refusing to move or tagging against the leash, at times, dogs will stand on two legs to show that they want to be picked up by their owners.

At times they do express wanting to be picked up because they are scared and need reassurance.

Especially when there are extremely loud noises wherever you may be or if there is a storm. 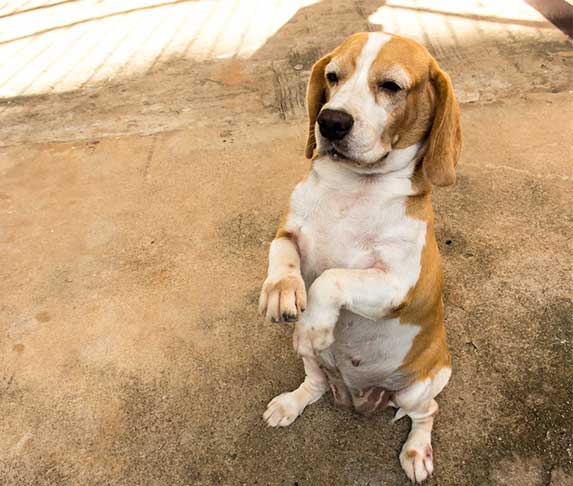 Dogs have a lot of energy. This explains why they love playing games like fetch or simply just running around.

They love being in action almost all the time.

Dogs can stand on two legs to show you that they are ready for you to play with them.

At times they bring you a ball and then assume this posture so that you can throw the ball and they can fetch it.

When dogs meet and stand on their hind legs, it is usually a sign of affection.

When they move around in this posture, it usually looks as though they are playing or even dancing.

While watching dogs interact, it is common to notice them hopping on their hind legs and almost try to wrestle or hug each other.

This is a common sign of playfulness among dogs and affection.

Should you be worried about your dog standing on two legs?

You should not be alarmed if your dog voluntarily stands on two legs from time to time.

However, this becoming a habit and especially over a long period should be a concern.

Veterans warn that a dog being in this posture may cause more wear and tear to their joints as they are naturally not like that.

In addition, aging in dogs often leads to paralysis and loss of muscle coordination.

And this is only made worse if the dog was used to assuming the posture of sitting on two legs or even walking around like that.

Your dog sitting on two legs is often just a cry for attention.

Be sure to be attentive to your dog, and you will never go wrong in terms of knowing what they are trying to communicate.