A mystery snail is a freshwater species of snail, belonging to a group of snails called gastropods.

It can be found in a wide variety of habitats, from ponds and lakes to streams and rivers.

Mystery snails are popular aquarium inhabitants and can be kept in single snail tanks or community aquariums.

They are relatively easy to care for and can be rewarding for those looking for something a little different in their aquarium.

In this article, we’ll look at 10 things you should know about mystery snails and how to keep them in your aquarium.

So if you’re thinking of adding one (or more) of these curious creatures to your aquarium, read on! 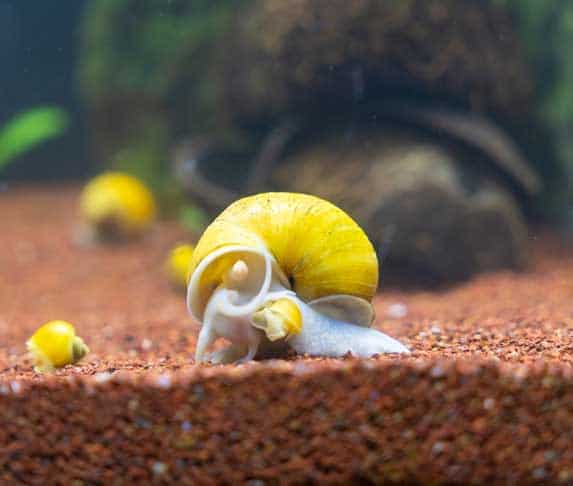 The name “Mystery Snail” comes from the unique, marbled pattern of their shells, which can make it difficult to identify their species or exact color.

Additionally, Mystery Snails can be found in a variety of colors, further adding to the mystery.

They also scavenge around the substrate of the aquarium, helping to keep it clean by consuming leftover food particles and organic waste material.

This makes them great tank cleaners and makes them popular amongst aquarium hobbyists who want to keep their tanks looking their best.

What Does Mystery Snail Eat?

Just like other types of snails, mystery snails are omnivores, meaning they’ll eat both plant and animal matter.

Mystery snails will nibble on algae, plant matter, and soft-decaying fruits and vegetables, but they also need extra nutrition in the form of animal proteins.

You can supplement their diet with sinking pellets or freeze-dried bloodworms, shrimp, or brine shrimp.

In addition to sinking pellets or freeze-dried foods, you can also feed your mystery snails boiled vegetables like spinach, frozen giant bloodworms (defrosted before feeding), cooked protein sources like cooked chicken, canned fish, or mussels/clams as an occasional treat.

You can also give them a bit of cooked pasta or rice every once in a while.

It’s important to always make sure the food is small enough for them to swallow and not too much food at once since leftovers can encourage algae growth.

Mystery snails are great scavengers, so if you have other fish in the tank with them, you can let them clean up the leftover food as a tasty snack. 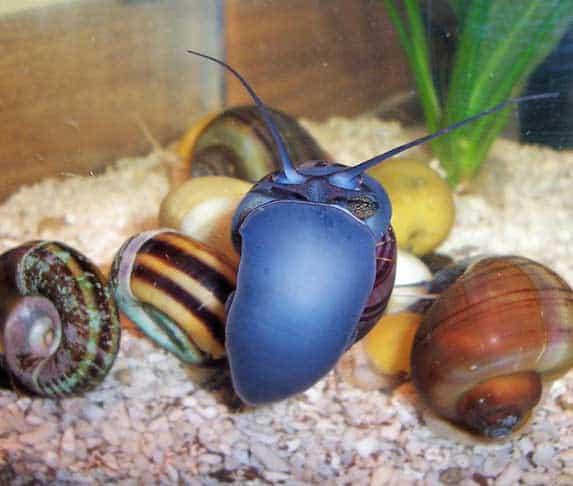 Mystery snails do not require company in order to survive but they do enjoy living with other mystery snails and can make great tankmates with fish, shrimp, and even other invertebrates.

That being said, it is important not to overcrowd your tank as this can lead to stress amongst all its inhabitants as well as an increase in algae growth due to an excess of nutrients in the water column.

If their usual foods are not available, they will also eat other snails. They can eat both plants and animals so they are omnivores.

Similarly, some species of mystery snail will feed on aquatic plants if they are offered them as food but this is not the norm.

Most mystery snails prefer feeding on algae and detritus rather than live aquarium plants although there are some exceptions so it’s best to research what type of species you have before introducing any live plants into your tank if you’re worried about them being eaten!

Why Do Mystery Snails Bury Themselves? 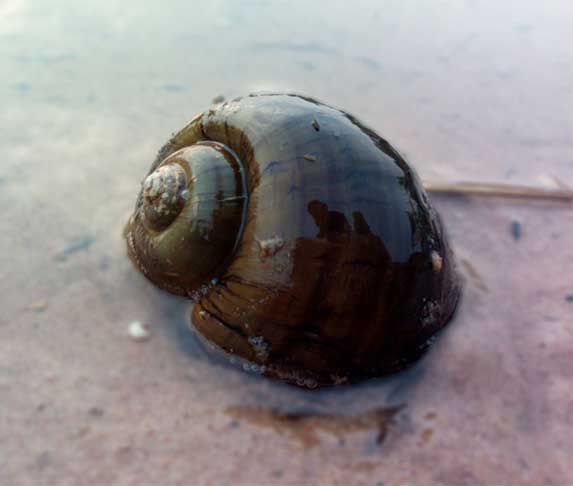 Mystery snails bury themselves when they feel threatened or stressed out as a way of defensively hiding from any potential predators but also for protection from sun exposure or rapid changes in temperature or pH levels.

Some hobbyists also suspect that it has something to do with the snail’s reproductive cycle as some species have been seen burying themselves at higher rates before laying eggs than normal.

Why Is My Mystery Snail Floating?

There are a few reasons why your mystery snail may be floating and not staying on the bottom of your aquarium where they usually reside.

The most common causes are either an imbalance in water chemistry or gas bubble disease which occurs when a buildup of gases occurs within the snail’s shell causing it to become buoyant.

If you think your snail might have gas bubble disease, try changing around 20% of the water in your tank immediately as this often helps in resolving the issue quickly.

Why Is My Mystery Snail Shell Turning White?

This can happen for several reasons such as an excess amount of calcium in your tank’s water, an internal parasite or bacterial infection, or from lack of food sources containing carotenoid pigments which give the snail its coloration.

To fix this issue you may need to change out 20-25% of your tank’s water once a week as well as monitoring calcium levels carefully (it should not exceed 25-30 ppm).

Finally, make sure you’re providing adequate amounts of food containing carotenoids such as freeze-dried bloodworms or spirulina wafers so that your snail gets enough pigment to maintain its lovely coloration!

Can Mystery Snail Live With Betta?

In general yes, mystery snails will get along with bettas just fine!

However, it is important that before you add any new inhabitants into an established tank you introduce them slowly by placing them in separate containers within the same tank and watching for signs of aggression or stress between the two species before allowing them access to the full tank itself.

If all goes well with this introduction process then both species should coexist peacefully without any issues arising!

Can A Mystery Snail Reproduce By Itself?

No, a mystery snail cannot reproduce by itself. While mystery snails can be both male and female, they must pair up with another opposite-gender mystery snail in order to produce offspring.

Unlike some other species of snail such as the pond snail or Ramshorn snail, mystery snails cannot reproduce asexually.

Asexual reproduction occurs when one organism produces offspring on its own without the need for a partner.

This is not the case with mystery snails.

Are you looking to breed a mystery snail? Here are some breeding tips to keep in mind:

What Do You Need To Breed Mystery Snails?

Once you’ve decided that you want to breed mystery snails, you’ll need to gather some supplies.

First and foremost, you’ll need a large aquarium tank with plenty of space for the mystery snails to move around easily.

You’ll also need to fill the tank with clean, chlorine-free water and add enough oxygen to keep the water healthy and oxygenated.

Furthermore, you should include some hiding spots, like rocks or plants for the snails to hide in.

Finally, make sure that you have plenty of food for the snails such as frozen vegetables, tropical fish flakes, or freeze-dried shrimp.

How Many mystery Snails Should You Have?

If you want to breed mystery snails successfully, it’s important to know how many snails you should have in your tank.

A good starting number is at least three or four snails (two males and two females).

However, if you plan on breeding a large number of mystery snails, it’s best not to keep more than a dozen snails in your tank.

This will give the mystery snails more room to roam around and will also make it easier for them to find one another during mating season.

How Do You Tell The Difference Between Male And Female Mystery Snails?

Identifying the Gender of Mystery Snails

On closer inspection, their body structure can also provide clues for identification.

Males tend to climb up to other mystery snails, whereas females stay at the waterline and move around less.

The shell of male mystery snails is typically a lighter color than that of the female.

Female mystery snails can lay up to 80 eggs within three to six weeks after mating, or even without mating.

What Are The Breeding Conditions?

In order for your mystery snails to successfully breed and produce offspring, there are a few conditions that must be met.

The most important factor is water temperature.

Make sure that the water temperature stays warm (around 74-78°F) as this will help encourage mating behavior among the mystery snails.

Additionally, make sure that the tank has plenty of hiding spots for the mystery snails to hide in if they feel threatened during mating season or when laying eggs.

Lastly, make sure that there is plenty of food available for the adult mystery snails as well as any newly hatched babies.

How Long Does It Take For Mystery Snail Eggs To Hatch?

Once your mystery snails have successfully mated and laid eggs, it won’t be long before they hatch!

It generally takes anywhere from two weeks to one month for the eggs to hatch depending on the water temperature and other environmental factors in your tank.

Mystery snails may seem like mysterious creatures but they can actually be quite easy to care for provided you have a basic understanding of their needs and lifestyle habits!

They’re popular among aquarists for their unique appearance and ability to help keep tanks clean so if you’re looking for something less ordinary for your aquarium we definitely recommend adding some mystery snails into your setup!