He is a slightly taller version of the pug but packs the energy and mischief of a pitbull.

A pug mixed with pitbull is not a designer dog you get to see every day.

But when you do, he will win you over with his personality.

Pug mixed with pitbull is one of the most sought-after designer breeds today. He has the gentleness of a pug but hides the mischief of a pitbull. This is a moderate energy dog that will suit people with an active lifestyle.

To understand what a pug mixed with pitbull puppy has to offer, we have to go back in time.

Pugs are of Chinese origin and were first reared by the Han Dynasty.

Pugs are believed to be descendants of the Tibetan Mastiff.

They are also one of the few brachycephalic dog breeds proudly bred by China.

They thrive on companionship and don’t mind the company of strangers.

A pug does not mind wearing the tag “Lap Dog” because it is his favorite pastime.

Pitbulls on the other hand are considered burly and aggressive.

But this could not be far from the truth.

Treat a pitbull right and he will show you all the love and goofiness in the world.

Pit bulls get the name ‘Pit’ because they were used in a sport called rat baiting. Several rats were put in a pit and the pitbull that kills the most rats wins in the sport.

Originally, Pitbulls were bred for bloody fights against bulls (cows).

This is where the natural aggressive side of the Pitbull comes from.

But when raised right, Pitbulls are often described as “Giant Teddy Bears”“.

Crossing a Pug and a Pitbull will result in a burly little dog that is extra goofy.

So goofy that he earns himself cut nicknames like;

Your Pug mixed with pitbull puppy is likely to live for 10 to 15 years as well.

But with a good healthy lifestyle, Pugbulls are known to live for 15 years and more. 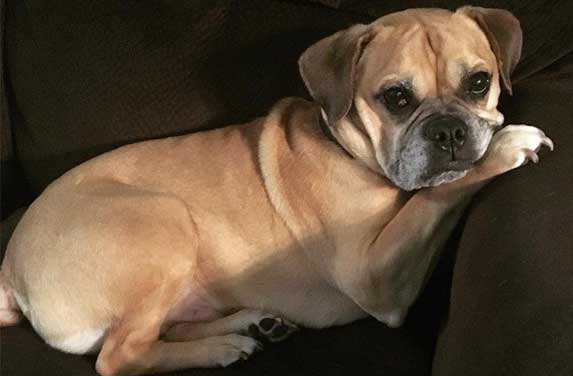 For a pug mixed with pit bull, expect a small dog that is slightly taller than a Pug.

A Pugbull also takes the muscular body of a pitbull which means he will be super-ripped.

For coat color, a Pugbull will have a blue, red, black, or brown coat.

Some Pugbull puppies will have a brindle, grey, or black n white coat.

Again, many color variations can come from designer litter.

Unfortunately, the American Kennel Club and Kennel Club of the UK do not recognize the Pitbull pug mix.

This is because such organizations only value purebred dogs.

A pug mixed with pitbull puppy will have a temperament that matches the parent with the dominant personality.

If your Pugbull pup is a pug at heart, he will be very playful and friendly with anyone.

He will thrive on cuddles and want to spend most of his time on your lap.

Be ready to handle his heavy body if you give in to his demands.

A Pugbull with a strong pitbull side will be goofy but well-balanced.

He will also be brave and make a great guard dog.

But do remember he has some aggression in him which can come out if he is poorly socialized or mistreated.

A pug mixed with Pitbull is one energetic dog.

He will be a lap-loving Pug with a Penchant for the outdoors.

Get ready for daily walks, hikes, or two hours of playtime at the public park.

You must train and exercise your Pugbull dog every day.

Exercising helps release pent up energy and keeps the dog in its good behavior.

A Pit pug that is seldom exercised is likely to develop destructive behavior.

Start training your pug mixed with Pitbull dog while he is a puppy.

At a young age, puppies learn to respect authority and learn commands first.

You cannot teach an old dog new tricks so don’t be late on the training.

As a moderate energy dog, a Pugbull enjoys simple exercises like fetching a tennis ball or Frisbee.

While indoors, a game of tug or hide and seek is fun for a pitbull pug dog.

But do not wear him down especially if he has the tiny nostrils of a pug.

A Pugbull’s coat is short and velvety like that of his parents.

He does not shed a lot which makes grooming easy.

Brushing his coat once or twice a week is enough to keep it neat and prevent matting.

Bathe your pitbull-pug dog once or twice a month.

Cut his nails short with a guillotine trimmer and brush his teeth regularly.

Let the pup chew on some canine dental treats too to control bad breath.

Pugs thrive on one and a half cups of quality dry kibble a day.

Divide the meals into two or three servings and do not feed anything else in between.

Pugs are known to be hearty eaters and if your Pugbull acquires this trait, he is likely to suffer obesity.

A pug mixed with Pitbull that lives on the right diet and lots of exercises should lead a healthy life.

But there are those health conditions that affect the parent breeds which the Pugbull is vulnerable to as well.

Some health issues to be aware of include;

If you like a quiet dog that enjoys morning or evening walks, a pug mixed with a pitbull is your best friend.

They have a short coat which is easy to maintain and does not shed a lot.

Adopting a pug mixed with pitbull is the best decision you can make.

Be ready to live an active lifestyle of walks and hikes and endless goofy fun in the house.

Feed your Pugbull a healthy diet and exercise him often to ensure he leads a healthy life.

Does a pug mixed with Pitbull bark a lot?

Both the Pug and Pitbull are laid back breeds. This means that your Pugbull pup is less likely to be an incessant barker. Early socialization will help bring out the best in this designer breed.

How much does a pitbull pug dog weigh?

A healthy pitbull pug dog weighs between 23 and 43 pounds. But a Pugbull can surpass his BMI if his diet is not controlled. Obesity is a common problem with this designer dog so be careful not to overfeed him.

How tall is a pug mixed with pitbull dog?

A Pugbull is slightly taller than an adult pug. He is 14 to 15inches tall from the shoulder. It is not uncommon to find a Pugbull that is nearly the height of a Pitbull at 16 inches.

How much does a pug mixed with pitbull puppy cost?

A Pitbull pug mix dog can cost between $700 and $1200. A cheaper option would be to adopt one from a shelter. Also, ensure you are getting your Pugbull puppy from a reputable breeder. The puppy should be registered and come with updated medical records.