When you think of the perfect designer dog, do you think of a Pit bull French bulldog mix? The Frenchie and Pitty may look like strange bedfellows, but they are capable of producing a litter […] 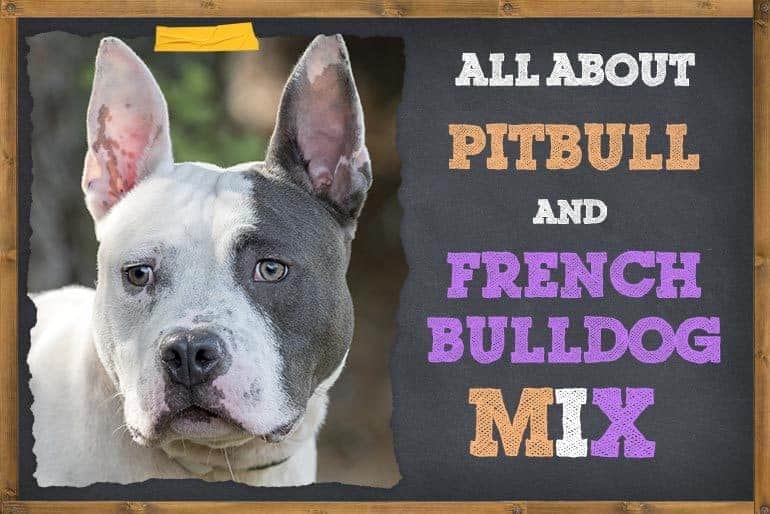 When you think of the perfect designer dog, do you think of a Pit bull French bulldog mix? The Frenchie and Pitty may look like strange bedfellows, but they are capable of producing a litter with the most covetable traits you would want in a dog.

We know, it is hard to wrap your head around a French bulldog mix with pitbull. One dog is burly while the other is tiny. One is laidback and the other aggressive. What gives in this kind of breed combination?

History of the designer breed

Breeders have been breeding different dogs to achieve specific traits in them. For instance, a St. Bernard Pit Bull mix produces a large dog that makes the best guard and rescue dog. The Goldendoodle combines the intelligence of the Poodle and the warm outgoing personality of the Golden Retriever.

We can then safely speculate that the Pitbull French bulldog mix was aimed at merging the great qualities of the Frenchie and Pitty. This crossbreeding also attempts at weeding out the bad qualities of either dog.

So how do these two dogs compare?

Though both dogs belong to the bulldog family, they were bred for different qualities and occasions.

The French Bulldog is the tiniest of the two and was majorly bred as a lap dog. He is loved for his mellowness, friendliness, companionship, and trademark bat ears. Living with a French Bulldog guarantees you hours of entertainment from his goofy antiques. Also, his tiny body makes him perfect for any living space provided he has his essentials.

A Pitbull, on the other hand, is larger, bolder, and stronger. But despite their big bodies, Pit bulls are very goofy. The other side of the Pitbull, which most pet lovers dread, is his hardheadedness. Many also fear the aggressive side of a Pitty which may be a risk if you are raising kids in the same house.

Does that mean a French Bulldog mix with a pitbull breeds a mellow and fun-loving Pitbull?

Most likely yes. But how a dog turns out personality-wise will depend on the dominant parent gene. Socialization and training are deciding factors too. With that said, what does a Pit bull French bulldog mix look like?

Expect a French bulldog mix with pitbull litter to have pups with unique looks and traits.

As we said before, the resulting traits from crossbreeding a French bulldog and a pit bull will differ from litter to litter and within the litter itself. But there are those trademark Frenchie-Pitty features that you can expect.

In terms of height, a Frenchie stands at 11 to 13 inches from the shoulder while a Pit Bull is 17 to 19 inches tall. Depending on the dominant gene, your French pitbull dog may either be 13 inches or 19 inches tall. Also, the pup’s weight will lean between 28 and 70 pounds depending on its height.

For coat color, a Pit bull French bulldog mix may have a white or fawn coat which are hues shared by both parents. If the pup is more of a pit bull, then look forward to color options like black, red, brindle, blue, grey, and brown. Tri-colored coats are very common as well.

Whether your French pitbull dog is tall or short, his body will, without a doubt, he will inherit the muscular physique of both parents.

All About Kingfish Pitbulls

Pitbulls have a lifespan of 12 to 16 years while Frenchies live for 10 to 12 years. Because designer breeds have the best qualities from their parents, your French pitbull dog can exceed the expected lifespan. Give him enough exercise, nutritious food, and lots of love and he will give you years of fun and love.

Contrary to popular belief, pit bulls are very affectionate and well-balanced breeds. If you meet an aggressive pit bull, chances are he is poorly trained or the owner did not establish themselves as the alpha from the beginning. A pitbull will show its stubbornness if he feels he is in charge. Also, mistreating a pitbull will result in aggressive behavior.

When a Frenchie and a Pitty are combined, the goofy playful nature of both dogs is likely to amplify. You have an intelligent and more trainable individual who is pleasant to be around. If your French pit bull has a stronger Frenchie gene, then you are less likely to experience Alpha issues.

A French Pitbull dog is a fun-loving, affectionate, and loyal companion to live with. He thrives on playing and exercising with his owner.  If you are not busy engaging him, he is more than happy to spend his remaining time watching your kids.

Since both dogs have short coats, your Frenchie-Pitty pup will not have issues with excessive shedding. They make the best house pets for people with pet allergies.

If your French Pit bulldog is a product of quality breeding, he should live a healthy life with fewer medical issues. But we cannot ignore the possible medical issues that may arise from cross-breeding two different breeds.

As the dog ages, it may have back problems (intervertebral disk disease) which are inherited from the French Bulldog. Nasal issues are also common with hybrids that inherit the French Bulldog’s flat face. Both Pit bulls and French bulldogs are likely to suffer hip dysplasia as they grow older.

If you are looking for a bold and affectionate dog, look no further than the Pitbull French bulldog mix. He has a strong healthy body that complements his balanced temperament. Feed him a healthy diet, lots of exercises, and plenty of love and a French pit bull dog will give you 16 years of pure fun.

What does a pit bull French bulldog mix eat?

A French Bulldog Pitbull hybrid is a dog like any other. They will thrive on high-quality kibble or wet foods. A raw diet is also great for A French pitbull dog if you want him to grow healthy muscle. Just be sure not to feed the dog foods that can harm them.

Is a French Bulldog and Pitbull mix smart?

Both the French Bulldog and Pitbull make very intelligent dog breeds. Frenchies are smart and grasp commands faster as long as you make the training fun. Pit bulls are not only smart, but they are loyal and eager to please you by learning commands fast.

Are French bulldogs as aggressive as Pitbulls?

Contrary to popular belief, pit bulls are as gentle and affectionate as French bulldogs. If properly trained and cared for, both dogs have few disparities in terms of temperament. Pit bulls only grow aggressive if improperly trained or mistreated.

Are French bulldogs related to Pitbulls?

A customizable modal perfect for newsletters
wpDiscuz
0
0
Would love your thoughts, please comment.x