All About Pit Bull and St. Bernard Mix

We live in a world where designing your dog is an option. And if there is one designer dog you should be reading about; it is the Pit Bull St. Bernard Mix. Here is everything […] 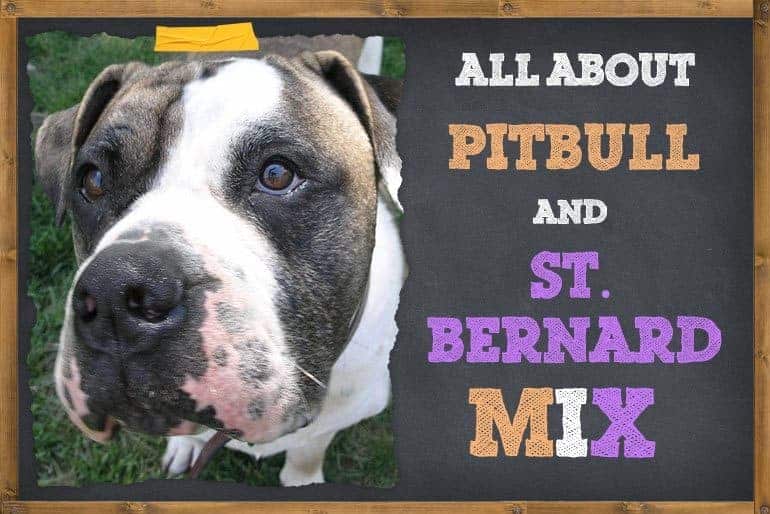 We live in a world where designing your dog is an option. And if there is one designer dog you should be reading about; it is the Pit Bull St. Bernard Mix. Here is everything you need to know about this bully and mellow pup who is winning the hearts of families.

A Pitbull St Bernard Mix is a blend between the mellow St. Bernard Dog and the Goofy outgoing Pitbull. He is great with family and would make a brilliant guard dog. If you have toddlers around, it is best to supervise his interaction with them because of the strong Pitbull side.

Before we made contact with planet Krypton, St Bernard’s dog was our earthly superhero. His work was rescuing people in the toughest of situations. This was as early as the 16th Century in Europe.

If you lived in that era and found yourself gasping for dear life in the Tidal Thames, that white light you see, as you nearly gulp your last, is not a portal to the afterlife. It was the brilliant white cape (we mean coat), and trademark brindle patches, of a St. Bernard dog, coming to pull you out of your drowning misery (punny right?).

The Bernard dog thus became a symbol of life and hope. But not just that, he also made a perfect family pup owing to his mild-mannered and sweet disposition. Though he was larger than most dogs of the time, he was a complete teddy bear.

While the Bernard dog sauntered around adorned in an angelic halo, the Pitbull dog was more of the devil’s incarnate. He was mean and vicious because his main job was challenging a 2000-pound bull to the death in the goriest of sports known as bull baiting.

But every cloud has a silver lining. Doors to the bull-baiting arena officially closed in the late-18th century. The pit bull dog could finally sigh in relief and bury his gruesome past. With more time for self-reflection, the pit bull dog discovered a new side to himself. A brave but playful affectionate fellow with the most robust of poise.

The first thing you notice is that the Pit Bull St. Bernard mix is larger than a standard pit bull. He stands at a height of 20 to 27 inches and weighs as much as 120 pounds. How tall and burly the St Bernard mix is will depend on what pitbull he is crossed with.

The American Bully is the largest of the four and even comes in XXL sizes. A cross between an XXL pitbull, like the Gotti Pitbull, and a St. Bernard would yield a mammoth of a Pitbull  St Bernard mix. Whichever bully you cross a St. Bernard with the offspring always takes up the height of St Bernard and the burly body of the Pitbull.

For coat texture, this St Bernard mix dog would either have the shorthaired coat of a pitbull or the longhaired coat of St Bernard dog. This will affect how often you groom the dog and if he will be safe around people with pet allergies.

For coat color, this burly fellow will wear one color with the distinct patches of a St. Bernard dog. If he leans more to the pitbull side, his coat may have other variations such as brindle, blue, tan, and fawn.

A Pitbull St Bernard dog inherits the floppy ears of the St. Bernard dog. Some pitbull lovers opt to dock the ears to make this designer breed look closer to a pit bull.  But since docking is illegal in several states, it does not hurt to leave him with his cute floppy ears.

The Pitbull St. Bernard mix is bred more for his temperament than his looks. But according to genetics, the overall temperament will depend on the parent with the dominant gene. If this designer dog is more like a St. Bernard, he will be laidback, mellow, friendly, and very affectionate. When he takes after his pitbull parent, he will be lively, friendly, and very strong-willed.

But like all other dog breeds, proper training, and early socialization is the only way to bring out his best qualities. Socialize a Pitbull St. Bernard mix dog to people and places as early as possible. This will help suppress his strong Pitbull side that tends to nip smaller targets like kids.

Generally, a St. Bernard Pitbull mix should be friendly and affectionate towards everyone. But because of his enormous body, you will have to watch him as he plays with the kids. He can easily knock a toddler over with his big body.

Both St Bernard and Pitbull dogs are known to form strong bonds with their owners. They are likely to suffer separation anxiety if left alone for too long. If you want to own a Pitbull St. Bernard mix dog, ensure you can dedicate time to spend with them every day.

Training should start early when the St Bernard Pitbull mix dog is a puppy. If you want a full-grown St Bernard mix dog, go for one that is already trained. Early training establishes your authority on the dog. It ensures he remains obedient and does not let his menacing Pitbull side come out.

Both St Bernard and Pitbull dogs are active. Their offspring, the Pitbull St. Bernard mix, will equally need enough exercise each day to release pent up energy. An under-stimulated St. Bernard mix will develop mischief or aggression.

A healthy Pit bull St. Bernard mix dog should live for 16 years. It could be more if he is taken care of and loved unconditionally. Some of the hereditary diseases that may affect this dog breed include;

Regular vet checkups should catch these diseases early and address them before they advance. Be more concerned about his health as he approaches his senior years.

This dog makes an excellent pet for families that lead active lifestyles. A St. Bernard Pitbull mix dog will keep your kids’ company as he watches over them. He is very alert and will warn you of an intruder in your vicinity.

A home with a large playground or proximity to a park is the best for a Pit bull St. Bernard mix. Providing them with hours of play and exercise ensures they remain well-behaved even if living in a city apartment.

This dog sheds moderately so regular grooming is necessary. If he inherits the longhaired coat of the St. Bernard dog, he is not ideal for people with pet allergies.

Do you live an active lifestyle and want a doggo who will join in your adventures? A Pit bull St. Bernard mix is the perfect dog for you. Proper training weeds out the undesirable traits and leaves behind a friendly, mellow, and affectionate dog who forms strong bonds with his owner.

Can I leave my Pit Bull St. Bernard mix puppy alone at home?

A St. Bernard dog is easy going and a people pleaser. He will strive to learn commands fast so he can please his owner. The Pitbull on the other hand is very strong-willed and can easily defy authority. Train the dog while still a puppy so he can grow to respect your authority.

Though they stand tall like giants, St. Bernard dogs are mellow affectionate dogs. But they can get goofy during playtime and their big strong bodies can knock you over. Always supervise a St Bernard mix dog around children.

Does a St. Bernard dog back a lot?

Though they like to spread their tongues out and drool a lot, St. Bernard dogs seldom make noise. They will only bark to warn you of lurking intruders. A Pitbull St. Bernard Mix dog with the right training will bark less as well.

A customizable modal perfect for newsletters
wpDiscuz
0
0
Would love your thoughts, please comment.x