The Birman and Ragdoll are two of the cutest cats in the world.

They both come from the same continent and are known to be very affectionate.

It can be hard to tell the difference between Ragdoll and Birman cats for someone looking to own one of these felines.

Though the Birman and Ragdoll cats look alike, they are quite different in terms of size, appearance, and temperament. For example, the Ragdoll cat is the largest of the two while the Birman is the moderate shedder. Both cats are laid back and affectionate but the Ragdoll appreciates pets more than the Birman.

At first glance, it is really easy to confuse these two cats.

But once you get to spend some time with them, you begin to notice their distinct differences.

Fortunately, we have compiled the similarities and differences between these two felines for you.

We are going to look at the similarities and difference between Ragdoll and Birman cats in terms of;

Both the Birman and Ragdoll cats are of Asian descent.

The Birman cat came from Burma which is modern-day Myanmar.

The Ragdoll cat comes from Persian which is present-day Iran. 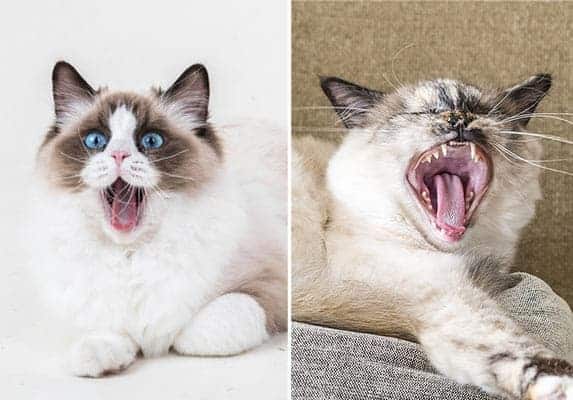 One difference between Ragdoll and Birman cat is their size.

The Ragdoll cat is the largest of the two growing to a height of 40 to 66cm.

Also, Ragdoll cats can weigh somewhere between 10 to 20 pounds.

It is not uncommon for a Ragdoll to hit the 25-pound mark especially if they are not neutered.

The Birman cat is the smallest of the two with a height of 20 to 25cm.

The average weight of a Birman is between 6 and 12 pounds with males outweighing females.

Both cats have an exquisite coat that carries two colors.

The main body color is often a lighter shade and covers the whole body.

The second color is deeper and is concentrated in specific areas known as points (face, legs, tail).

Birman cats are born white with the point color being blue, chocolate, lilac, and red.

It is possible to find Birman cats with cream and tortie as point-colors too.

The points are described as seal, chocolate, blue, and lilac.

Some Ragdolls may come with red or cream as point colors.

Both cats lack an undercoat but the Birman is considered more hypoallergenic.

The Birman cat has a single coat with short hair.

Besides shedding moderately, the Birman cat coat is also less susceptible to matting or tangling.

The Ragdoll coat is longer and silkier than a Birman’s.

But the downside is that the Ragdoll is a heavy shedder, especially in season.

He will leave cat hair all over your house if you do not groom him.

There is no big difference between Ragdoll and Birman’s lifespans.

They both will live for 12 to 16 years but the Ragdoll can go to 17 years with proper care.

But the Birman is the oldest of the two felines having been recognized in 1925.

The Ragdoll cat was later recognized in 1966.

This is where the Ragdoll cat takes the prize.

Both cats are very affectionate and laidback.

But the Ragdoll is a sucker for pets and pampering more than the Birman.

Ragdoll cats were bred for companionship.

They not only love their owners, but they also get along with other pets.

When you pick a Ragdoll up, they love to hang loose in your arms, which is why they earned the name Ragdoll.

Their sweet and friendly personality is perfect for families with kids or elderly people.

Birman cats are adorable too and they form great bonds with their owners.

They adapt very well to large or small families.

A Birman is not at all demanding to live with.

Get a second pet to offer them companionship and they will love you for life.

Birman and Ragdoll cats are said to have a dog-like personality. They are bred from the Siamese cat which loves to follow its owner around, sometimes leading the way.

As descendants of the Siamese cat, the Birman and Ragdoll cats may share some health problems.

Both cats are vulnerable to hypertrophic cardiomyopathy.

The Birman cat, however, is more predisposed to the condition.

The Birman cat is easier to groom compared to a Ragdoll.

Their short single coat sheds moderately and is easy to maintain.

Brushing once or twice a week is enough to prevent tangles and matting.

No cat is 100% hypoallergenic. Both the Birman and Ragdoll shed fur, but the Birman coat is easier to maintain.

The Ragdoll cat is a heavy shedder and, therefore, more demanding in terms of grooming. Their silky longhair coat requires regular brushing to keep it smooth and prevent tangling or matting.

The difference between Ragdoll and Birman cat is mainly on size, coat type, and grooming needs.

Both cats are laid-back, affectionate, and adapt to any lifestyle.

It all comes down to personal preference when choosing between these adorable felines.

Does a Ragdoll meow a lot?

Ragdolls are naturally mellow and less likely to be vocal. But if your Ragdoll is meowing a lot, they may be having cognitive issues.

Why are Ragdoll cats called Ragdolls?

The Ragdoll cat loves to be held which is where the nickname comes from. Ragdolls thrive on companionship and make better lap pets compared to Birman cats.

Compared to Ragdolls, Birman cats are high energy and more likely to get overstimulated. It is easy to train a Birman not to nip you, but if you want zero risks, a Ragdoll is more laidback.

Should I get Birman or Ragdoll Cat?

It is easy to mistake either cat given how similar they are in appearance. But when you look closely, the Ragdoll cat is larger and has a bushier coat. Compared to the Ragdoll, Birman cats are more playful and energetic.