Love Huskies but find them too big for your home?

Look no further, as there are a variety of small dog breeds similar to Huskies which you can choose from.

Purebred Huskies, also known as the Siberian Husky, are medium-sized dogs developed to work in packs.

They are friendly, dignified, athletic, and intelligent.

These Huskies have wolf-like looks, however have a personality of a chihuahua.

These dogs have bright blue eyes with striking facial masks, making them elegant, to say the least.

According to the American Kennel Club, these dogs are known as the 12th most popular dog breed in the United States.

As Huskies are born as pack dogs, they enjoy other dogs, getting along with them well.

They are also highly energetic and love to chase small animals.

Read more to find out our list of smaller dog breeds that are considered to be similar to Huskies. 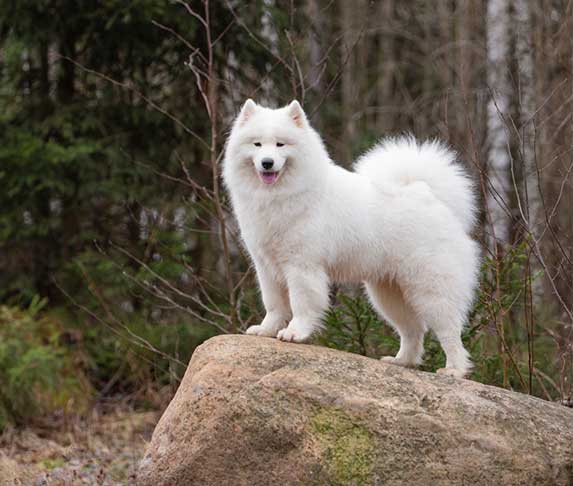 The Samoyed dog is similar to a Husky, with its beautiful thick white coat and its similar traits.

Both these breeds have originated in Siberia and are used as sled dogs.

Samoyeds are beautiful, hardworking, and practical dogs that were traditionally raised to help pull sleds and herd reindeers.

Similar to Huskies, Samoyed dogs are alert, friendly, and intelligent.

As they are easy to train and love to please, they make perfect family dogs.

However, remember that as this breed is highly social, they do not like being left alone outdoors for a long time.

While Huskies are more independent and do not mind being alone. 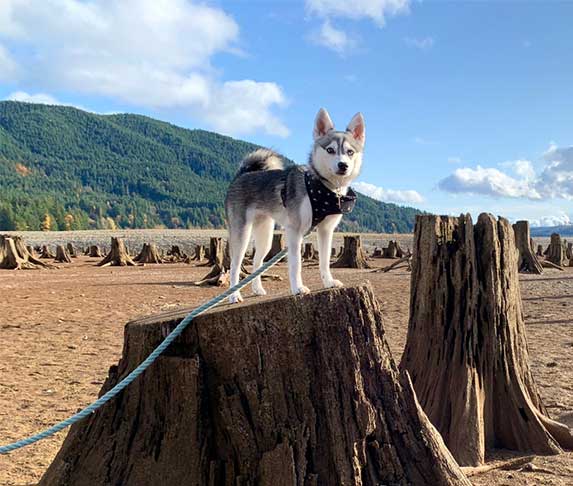 Although his breed looks similar to a Husky, they are relatively smaller.

Thus, they are not as effective sled pullers or watchdogs as Huskies.

Compared to Huskies, they are miniature, standing between 13 to 15 inches.

The Alaskan Klee Kai is most commonly known as a miniature Husky, however, they are both two separate breeds.

This breed, developed in the late 20th century is a great companion-sized dog.

They were originally bred to carry a light load for long distances.

They are energetic, intelligent, and curious.

Unlike Huskies, they are easier to train, great hunters, and make good family dogs.

Similar to Huskies, the Alaskan Klee Kai will need socializing training along with obedience training to get along with other people and dogs.

But once they are comfortable, they will open up, showing their loving and friendly side.

While they tend to be on the shy side, they are also not afraid to be vocal, thus you should expect barking. 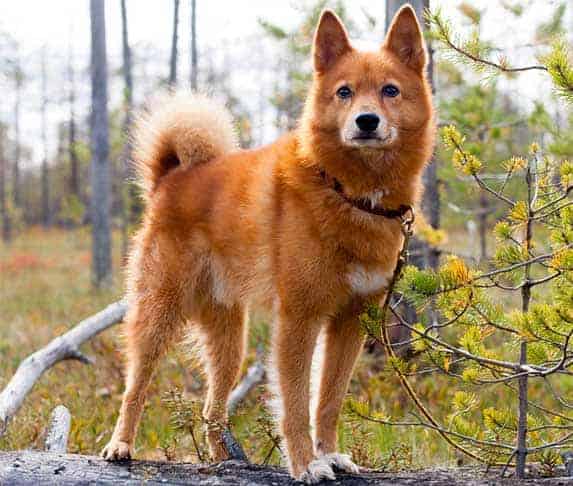 While this breed is as cute as Huskies, they are far more aggressive, as they were bred to hunt and guard.

At around 31 pounds, the Finnish Spitz have physical characteristics that resemble Huskies, including their thick dense coat.

Similar to Huskies, the Finnish Spitz is playful, independent, and energetic, having an average obedience intelligence, making them easy to train.

Like Huskies, they make for good watchdogs and defenders, as they were bred as such.

The Finnish Spitz is very distinguishable, once you know how to.

They have foxy ears and faces, like Huskies, and have a smiling expression with a curved tail.

While Huskies come in black and white, the Finnish Spitz is

13 Dog Breeds That Are Similar To Greyhounds 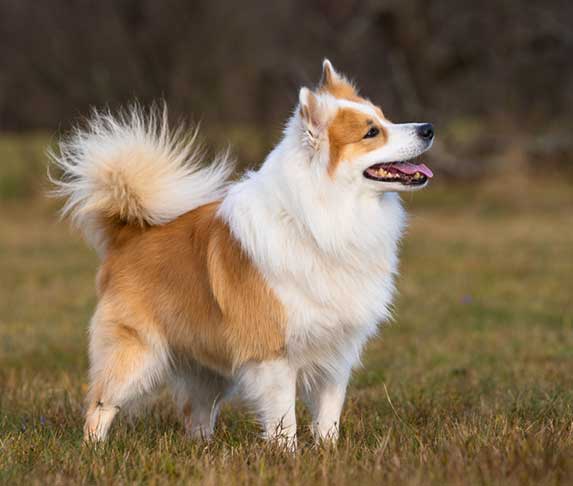 The Icelandic Sheepdog is a spitz-type dog originating from Iceland.

These dogs have been bred to herd sheep, further resembling dogs that were found in graves in Sweden and Denmark.

These dogs have wolf-like features, similar to Huskies, with their thick coat, pointed ears, and slanted eyes.

The Icelandic Sheepdog comes in various colors, including grey and white, tan and white, cream, or chocolate.

They are also alert, friendly, outgoing, social, and stubborn at times.

As this breed is intelligent, it is not difficult to train him, as they are eager to please.

They make for great family dogs, as they love being social and do not like being left outside with little human intervention. 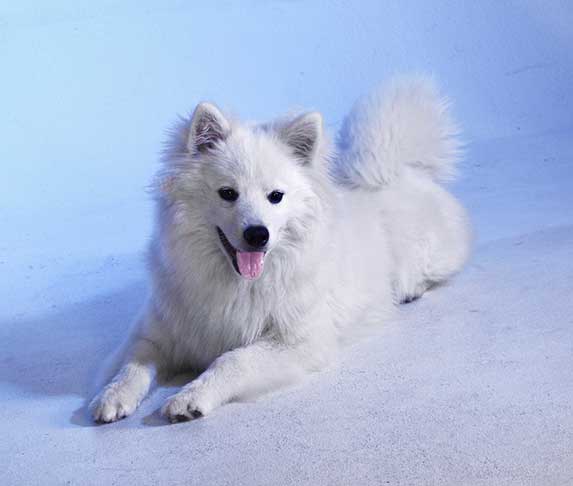 The American Eskimo Dog is a small dog that resembles both the Husky and Samoyed breed.

They can grow in 3 different sizes, having a wedge-shaped head and tall erect ears. Similar to Huskies, the American Eskimo Dog has a thick coat and dark eyes.

Similar to Huskies, the American Eskimo Dog is alert, friendly, energetic, and powerful.

While they are not the brightest of the bunch, they are easily trained and a very playful breed.

Do note that this breed tends to have separation anxiety when being left alone in the house for too long. 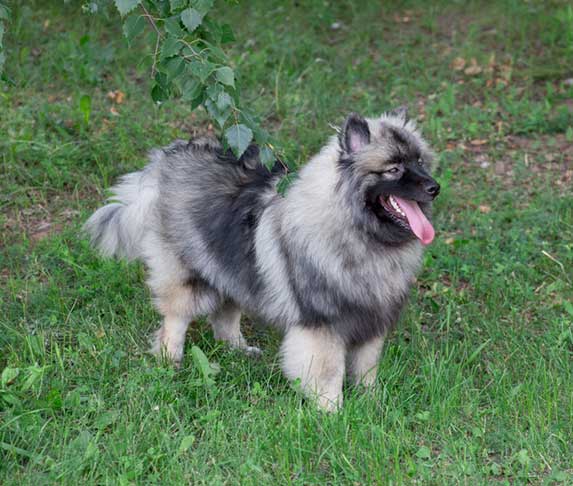 Also known as the Smiling Dutchman, Keeshonds originated from the Netherlands and was used greatly as watchdogs — far better than a Husky.

This breed is also less inclined to drift and wander like a Husky.

While smaller than a Husky, this breed similarly has a thick and dense coat with erect ears, a shop muzzle, and a fluffy tail.

Having a denser coat also means that they require more grooming and maintenance than a Husky.

Similar to Huskies, Keeshonds are playful, friendly, affectionate, and intelligent — responding well to training and socialization.

They are also friendly with children, making them great house dogs.

Like Huskies, this breed thrives in a social environment and can get attached to its owners.

They are also used as comfort dogs in multiple situations, due to their lovable and friendly personality.

There are multiple different dog breeds that may share similarities with the Husky.

While they may share some physical appearances, most of these breeds are of smaller size.

Regardless if they are Huskies are not, these smaller dogs are still highly captivating and adorable.

As all dogs are different, these similar breeds may not share the same personality as Huskies and will have their own unique traits worth exploring.