A trip to the vet is always important once your dog starts behaving far from normal.

Symptoms like diarrhea, loss of appetite, sleeping most of the time often call for alarm and should be taken as seriously as possible.

Once a trip to the vet confirms the sickness, it is always important to note that that may call for a diet change.

The food to be taken always depends on the severity of the sickness.

It is advisable to do some research before deciding whether to change your dog’s diet.

Warning: Severe diseases such as allergies, kidney problems, and diabetes may require a very special diet probably with a list of what you cannot give your dog. This also applies to dogs that may be undergoing chemotherapy.

This is because good recipes for your dog when sick are very helpful in the recovery process.

They also ensure your dog stays well-hydrated during that difficult time.

With all the above, is chicken noodle soup recommended for your sick dog? 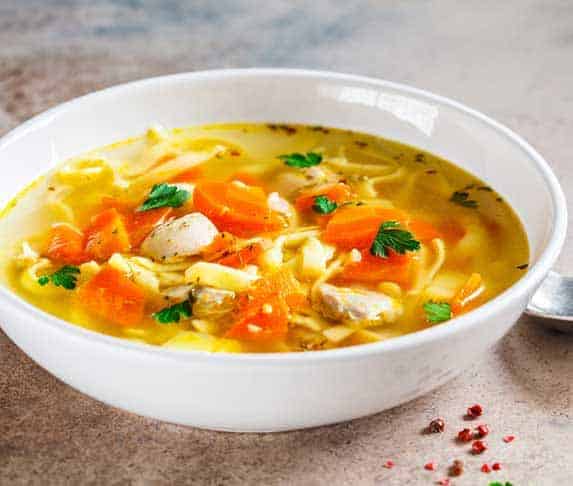 Chicken noodle soup is usually one of the best meals recommended for humans when they fall sick.

Does that mean it is advisable to be given to dogs as well?

Yes. Some owners decide to care for the unwell dogs in a way that is common for them by using chicken noodle soup.

Normally, the same recipe is used for humans can also be used for dogs with a bit of change here and there.

Tip: When making chicken noodle soup for dogs, it is advisable to make homemade soup from scratch where you get to have control over what you put in your soup.

How to prepare chicken soup for dogs?

Ingredients for your home-made chicken soup

How to prepare the soup

Make sure to add no spices to your chicken.

Then add water and let it simmer for about an hour after adding a tablespoon of chicken base.

4. Allow the soup to cool and ensure that there were no onions, garlic, and chives used.

5. The soup is best served bland and if your dog is well enough to eat, it is advisable to serve along normal dog food to compliment the meal.

If they are not well enough to do it, it is okay to serve the soup on its own — It will keep them warm and hydrated.

What to note about the soup:

What can the dogs eat apart from a soup that is of nutritional value and helps them with the recovery process?

And is safe as well?

It is good, especially for a bland diet.

As much is it may be tempting to add salt and spice. DON’T!

All you need to do is bake with some water and as you do that, you could boil the rice.

Once both meals are separately done, shred the chicken into smaller pieces and mix with the rice.

If there is some of the leftover broth, it could be added to the chicken as well.

Serve in small portions over 2 to 3 days as you increase the portions of food.

If the sickness continues, you should visit a vet.

This is especially for mild ailments such as stomach gas.

It is very easy to make. All you need is pure pumpkin puree and yogurt.

A quarter cup of pumpkin puree and 4 tablespoons of plain yogurt should do the trick.

Mix into a thick paste.

If the health issues persist, it is recommended to go to a vet.

Why is homemade soup preferred over tinned chicken soup? 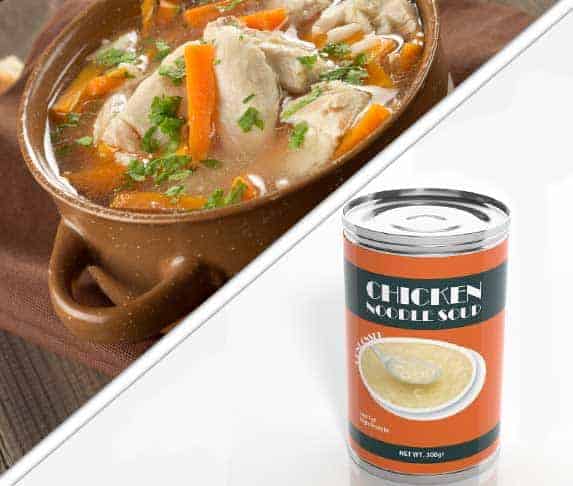 This is because of the ingredients put in the soup.

When making homemade soup, it is easier to control what you are putting in the soup unlike when you buy pre-made tin soup in a tin.

Tinned chicken soup usually contains high amounts of salt, garlic, and onions which can be harmful to dogs and more especially to sick dogs.

For example, a high amount of salt in the soup, if consumed over a long time, can lead to brain damage and leads to high levels of sodium chloride in the body.

Which in turn requires the red blood cells to transport water from their cells to the blood to maintain normal blood salt levels.

It is also preferred to make your homemade chicken soup because it is difficult to know what other people put in their chicken soup and it would be considered rude to ask.

Some people add raw eggs into their chicken soup which is both dangerous to dogs and humans.

It might affect the dogs more because they are sick.

Raw eggs may have some bacteria such as salmonella which can easily cause food poisoning to both the dog and human but maybe worse in the dog.

Others may add fat trimmings to their soup either from raw meat or from cooked meat.

This is seemingly not dangerous for humans but has been said to cause pancreatitis in dogs.

It is allowed to give your dog homemade chicken noodle soup on their way to recovery.