If you are a pet parent to several cats, you would agree that it is hilarious to watch the felines go at each other with their paws.

Cats are known to swat at anyone or anything.

But why do cats hit each other?

Is it playing or a sign of something serious?

Why do cats slap each other? 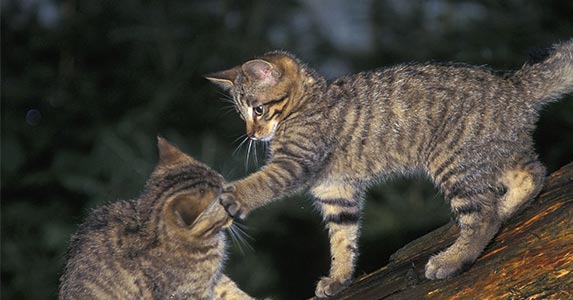 It all depends on the intensity of the slap. Some cat slaps are soft while others will throw the other feline off balance.

Also, your cat’s mood during the slapping matters.

It helps you know if the slap is harmless or something serious.

A cat will slap another for these reasons;

A cat will slap at a fellow furry mate to show who is boss.

In most cases, the victim bows down to this show of authority.

However, other cats, that equally feel bossy, will not take this lightly.

One slap can easily turn into a full-fledged fight.

Cats love to be goofy right from when they are kittens.

They will slap at another cat to indicate they are ready to play.

Their attention-seeking side is so strong that they will deliver several slaps until their fellow cat obliges to play with them.

When cats are being playful, they love to slap, tackle, and roll

So how do you know your cat is delivering a playful slap?

Watch the paws closely. If the claws are still retracted, then it is no sign of aggression.

Also, there should be no hissing or screeching sound coming from either cat.

This is your assurance that the two felines are being playful.

The funniest moment is when one cat moves in quietly on another sleepy cat and smack them square on the head.

What follows is a chasing game that often ends up with one cat pinned to the ground.

It can get so hilarious that you are left in stitches.

If you have watched cats slapping each other out of aggression, you can attest it is never a pretty sight.

Claws are out, hissing and screeching escalates, and slaps quickly turn into scratching and biting.

Never break an escalated cat fight with bare hands. This can earn you a bloody scratch or bite from one of the cats.

It is best to stop the fight before it escalates.

But if you are too late and the two felines are already goring each other, do this instead;

What if the cats start fighting again?

You will have to keep the two felines separated.

This will stop the fight and discourage either cat from developing aggressive behavior.

If they are the only felines in the house, they are likely to start missing each other.

Reunite them and watch them closely if they are getting along again.

Why do cats slap objects? 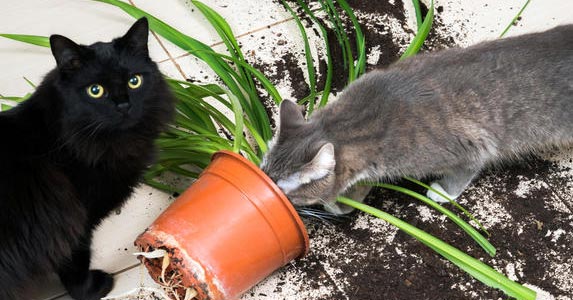 If cats are not slapping each other, they will be slapping at objects.

So why do cats smack things?

Two common reasons for this behavior is;

Cats slap at objects out of curiosity.

The same way you would move something around or push a few of its buttons to see how it works.

Cats have this inquisitive side as well.

You will notice this behavior with a new toy.

A toy mouse would get a cat curious enough to swat at it to see if it moves.

If the cat sees the object as harmless, it will lose interest and stop the slapping.

A cat will slap at an object when playing. It is a playful gesture you will see with toys like a catcher wand or any toy with a dangling end. The claws may occasionally come out but this is harmless. Your cat is only trying to catch the elusive end.

Why do cats slap people? 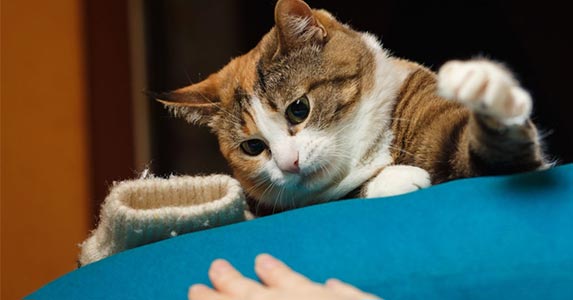 Believe or not, a cat would smack its owner out of love.

Your feline would find you asleep and deliver an affection swat on your forehead or hair.

If you have some hair strands hanging, your cat will swat at them trying to catch them.

You may also notice holding and licking your hair out of play.

If your cat shows aggression while slapping people, it is out of discomfort.

This can happen if you put the cat in an environment, they are not familiar with like a pet clinic.

Also, a cat would slap a stranger out of defense.

It could also be a sign of playing if the cat is swatting at an object on the stranger like a shiny hairband or dangling pendant.

Why do cats knead?

Kneading in cats is a sign of affection and comfort. Cats learn to knead when they are still a suckling kitten. The kneading motion was a way of showing comfort and love to their mother, an instinct they carry to adulthood.

How do I stop my cats from attacking each other?

When you notice aggression between cats, separate the two cats before it escalates to a fight. Also, get them separate toys, feeding bowls, and sleeping mats. Do not approach a cat when it is still aggressive, leave it on its own to cool down. Neutering the cats may also help reduce aggression.

Why do my cats hit each other?

If the cats are strangers to each other, they will likely slap each other out of fear. Two cats that know each other will slap each other during playtime. You must evaluate the cat’s mood when they are slapping. You should intervene if you notice any signs of aggression in cats.

What does it mean when my cat slaps me?

A cat will gently slap you out of love. It is also because they are trying to get your attention. Cats cannot speak so slapping is a way of telling you to listen to what they want.