Our cats are some of the most adorable creatures on the planet, and they are even cuter when they sleep.

When it comes to the sleeping position of cats, there are a lot of them.

Unfortunately, only a handful of these sleeping positions are known and decoded of their unique messages and representations.

Which contributes to countless owners’ insatiate desire to know what’s up.

Understanding your cat’s position when it sleeps is essential because it comprises 66% of its whole life, which is more sleeping than most small mammals.

One of these positions is sleeping with their heads up.

What does it mean? Let us find out!

Cats sleep so much due to several reasons.

Predators that have little to no natural competitors in their habitat may not sleep for long periods.

So, if your cat sleeps for up to 16 hours, it means that it preserves its energy that will further help extend its life’s longevity.

The sleeping pattern of our pet cats can correlate to their brain activity.

Some studies tested this experimentally using an electroencephalograph (EEG) that measures waves or bursts of brain activity on a graph.

When the cat’s mind is awake, it communicates a tiny bunch of erratic peaks around.

But while the cat’s brain is dozing, it creates long and intermittent waves called slow-wave rest.

Which typically lasts between 15 and 30 minutes.

These connections, even in sleep, can affect the cat’s sleeping position.

Sleeping with Its Head Up: What Does It Mean? 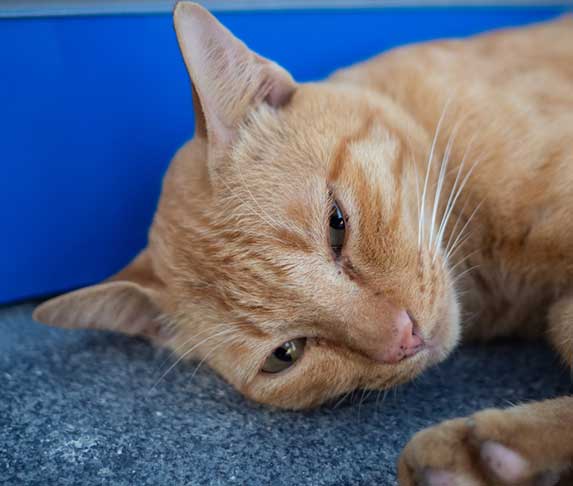 Because cats’ brain activity can affect their sleeping positions, it is also one of the reasons they can sleep with their heads up.

When the cat feels comfortable and relaxed, they tend to roll on their sides, and they enter deep sleep.

But if they are sleeping heads up, then it can mean that your cat is only lightly asleep.

It means that while your cat appears sleeping, its brain is activity is active and vigilant.

It relates to its instincts as predators.

Innately, all feline creatures are born with hormones intended for asserting their dominance in the territory.

Correlatively, this applies to our house cats as well.

When your pet cat does this when it sleeps, the cat usually lies with the head lifted and his feet tucked under it.

But, there are also cases where your cat may sleep while sitting up.

This position is a more active sleeping position where your cat’s limbs stiffen to keep it upright.

It means, at a minute’s notice, it’s able to jump into motion.

Your cat might sleep with its head up once in a while to prepare for something when it wakes up, or a quick reaction when interrupted, or there is an influence of an external stimulus.

It is best for you, as an owner, not to spook your cat when it is in a deep, comfortable sleep.

Your cat sleeping with its head up is typical.

It just means that it is vigilant and ready for something that might come up to it.

It is just like how we also take a few minutes to sit and close our eyes but are wide awake.

So do not worry about this sleeping position.