Seeing your dog curl their tongues after they let out a yawn is probably one of the cutest things ever!

However, this behavior is maybe an indication of boredom, stress, anxiety, and even tension.

In this article, we will share the nine reasons why dogs curl their tongues when they yawn.

Make sure to check each one out to find out the underlying reason why your dog might be doing this too often. 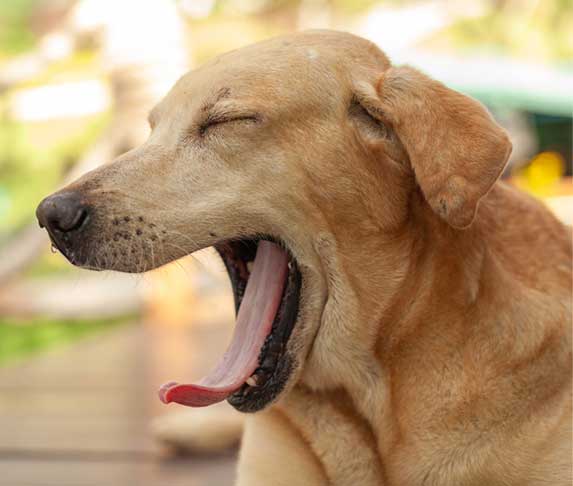 Yawning is one way for dogs to release the accumulated tension in their mouths, jaws, and tongues.

When they yawn, they stretch their tongues and curl them up in the process.

As they cannot try their tongues straight, they instead curl up, going towards the insides of their mouths.

As dogs age, they also experience muscle weakening like humans.

It is the reason why many old dogs lose the ability to curl their tongues when yawning.

And because of this, they cannot stretch their tongues, making it difficult for them to control their tongue movements accurately.

2. Mimics the Action of Drinking

Another reason is that as dogs yawn, they might imitate their actions when drinking.

Dogs curl their tongues up to create a kind of spoon that scoops up water.

Yawning could be giving them the same sensation as when they are drinking water which is why they curl the end of their tongues.

Dogs’ tongues are longer than humans, and some dogs have an even longer tongue than most.

Curling their tongues while yawning could be a preventive measure for them to avoid them injuring themselves.

After yawning, they close their mouths shut, and when they do not curl their tongues up, there is a high probability that they would bite their tongues.

Why Do Dogs Hyperventilate In The Car? (9 Reasons)

Repeated yawning might look creepy or cute, depending on your preference, but it is something to be alarmed about.

Excessive yawning and tongue curling can mean that your dog is either stressed or anxious.

A stressed-out mind triggers these actions, and one thing to know for sure is seeing your dog curl their tongues even when they are not yawning or drinking water.

When you see this sign, take your dog to the vet immediately.

There might be some underlying conditions that your vet can only find after performing a series of tests.

As mentioned above, curling their tongues while yawning could be a sign that they are mimicking the action of drinking.

However, there is another reason for them to do this. Dogs might be trying to “scoop” air with their tongues because they are out of breath.

Yawning is one way to inhale more air somehow.

Now, dogs might be thinking that curling their tongues will help them breathe easier as they can “scoop” the air.

It is another reason why you should take your dog to the vet whenever you observe that they are yawning excessively. 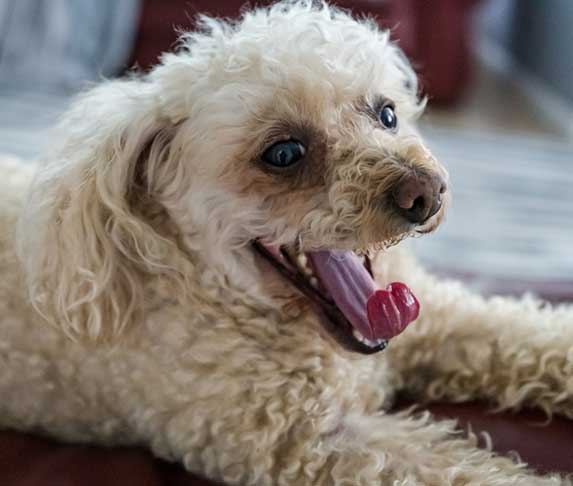 Dogs do many silly things, including licking a lot of stuff, including people and other animals.

They also lick around their mouths when eating or drinking.

Curling their tongues may be a natural reflex that is beyond their control. It is like closing your eyes whenever you sneeze.

Twisting their tongues could be a type of autonomic reflex that results from the length of their tongues, especially those dogs who have very long tongues.

When you yawn, a breeze of cool air passes open your tongue.

When panting, their tongues are usually just drooping.

Now when yawning, they have an opportunity to cool the underside of the tongue.

And for them to be able to do this, they curl them up so that the cool air can reach under their tongues.

Try this one for yourself.

If you notice, your voice’s tone is much more prominent when your tongue is curled inwards.

It could be a way for dogs to create a much larger sound when yawning to express boredom.

Yawning is already enough to say that they are bored or sleepy but having that kind of sound coming from them will undoubtedly catch your attention.

9. A Form of Self-Defense

Dogs may have figured that they are defenseless when they yawn.

There could be a possibility that they are trying to hide their exposed tongues from any intruder that may try to harm them.

These harmful elements may range from insects, objects, and other animals.

While this reason may be a long stretch, it is still possible.

Many people have made theories as to why dogs curl their tongues when yawning.

So far, the most possible and believable reason is that they are trying to stretch their tongues because drinking for them is quite a task.

Still, there are so many reasons as to why they do this. Could they just be trying to look cute while yawning?

Or is it because they feel less horrendous when they do not let their flappy tongues out whenever they yawn?

However, young pups do not curl their tongues whenever they yawn.

Could this be an acquired technique from older dogs?

We have yet to uncover this adorable and natural action by dogs.

But one thing is for sure — they are perfect just the way they are, whether they decide to curl their tongue up or just let it drop down.