One of the rarest things to come across is a cat with blue eyes.

And when you do, those eyes are the most adorable you will ever find on a cat.

But have you ever wondered what cats with blue eyes really mean?

Is it okay for a cat to have blue eyes or should there be concern about its health?

And if your cat has blue eyes, does this mean its litter will have blue eyes too?

Fortunately, we are going to unravel to you the mystery behind cats with blue eyes.

Also, we will highlight and explain some common myths people have about cats with blue eyes. 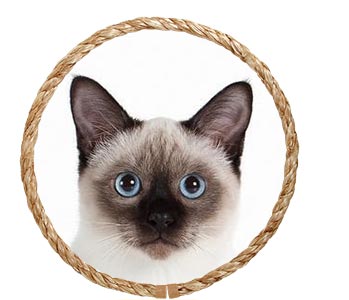 There is a common belief that all blue-eyed cats are deaf and dumb.

In some ancient superstition, white-coated cats were believed to be a sign of bad or good luck.

Why does a cat have blue eyes?

The answer is hidden in the genetic makeup of the cat. Neural cells known as melanocytes are responsible for the formation of eye color.

These cells exist in the part of the eye known as the iris.

When a cat is born, it has very few melanocytes.

This is why kittens are born with naturally blue eyes.

As the cat grows, its body produces more melanocytes.

Within 6 to 7 weeks of the kitten being born, it will have enough melanocytes to change the blue eyes to its true color.

But what if the kitten does not produce its true eye color even after the 7 weeks?

Then there is a likelihood the cat is not producing enough melanocytes.

This can only happen if there is a mutation in its genetic makeup.

The mutation occurs in a gene known as a KIT gene.

This gene mutation does not occur in all cats.

Only a special breed of cats will have this mutation and mostly cats of Asian and Middle-Eastern origin.

Which cats have blue eyes?

The Siamese, Balinese, and Himalayan cats are likely to have blue eyes.

Other cats with this gene mutation include Persian, Javanese, and Birman Cats.

A cat breed is known as Ragdolls also get blue eyes which appear exceptionally sparkly.

Also, a cat breed known as Ojos Azules tends to have blue eyes as well.

What other features are found in cats with blue eyes?

Since melanocytes are found below the skin, they will also affect a cat’s coat color.

Any cat with blue eyes almost always has a rare coat color.

It is also possible for the cat’s coat to have no color at all.

Here is what you are likely to find in cats with blue eyes;

Do cats with blue eyes have health issues?

Now we can address the myth about all blue-eyed cats being deaf.

The truth is, not all cats with blue eyes are deaf.

But some cats with blue eyes suffer from partial or total deafness.

Melanocytes produce melanin and also aid in the development of auditory cells in the ears.

Since blue-eyed cats have few melanocytes, their hearing ability may also be affected.

But not all of them. Only blue-eyed cats with a dominant white gene are likely to be partially or totally deaf.

This is because they have very few melanocytes which prevent them from expressing their true eye and coat color.

For other blue-eyed breeds, hearing loss will only be partial or total in one ear.

There are cats with only one blue eye.

Hearing ability may be impaired on the side with the blue eye only.

The other ear functions as normal.

If a cat has no melanocytes in its body, the eyes will be red and not blue.

This red color should be confused as pink eyes which are a sign of an underlying disease.

Blue-eyed cats with a dominant white gene also suffer from skin issues because of their albinism.

They cannot stay out in the sun for too long because their coat can be damaged.

Now you know why and how some cats get blue eyes.

If you feared your cat may end up deaf, chances are they will not.

Only cats with low numbers of melanocytes are likely to suffer from deafness.