You have probably seen lots of cat videos on Youtube where it appears as though the cat is hypnotizing a bird.

It may raise your eyebrow and have you thinking whether the video is authentic or if it has been edited to look as such.

Worry no more because today, we will be answering the question “Can Cats Hypnotize Birds?”

Birds and chickens can be easily stupefied.

One reason is that they tend to play dead whenever a predator is chasing them to get themselves off the hook.

In this situation, birds are easily fascinated by a cat’s eyes, mostly if a cat sits very still and their pupils start to dilate.

According to an expert, the fascination that a bird has on a cat’s eye has the same effect as a coin or a shiny thing has on a person.

You may notice that your cat chirps and focuses on a bird whenever it sees one flying around. 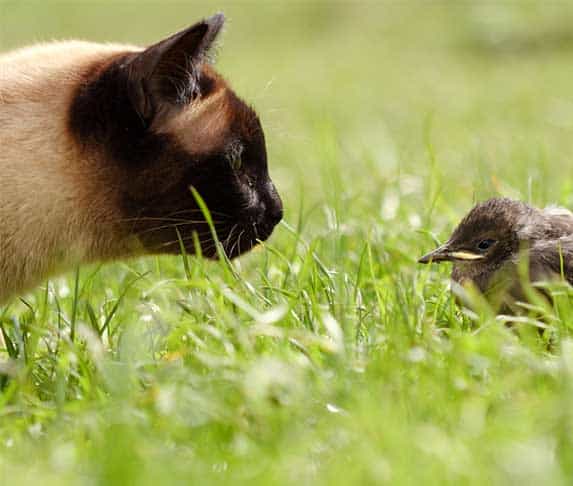 Or because the cat is trying to get the bird to look into its eyes so it can be hypnotized and the cat catch it. 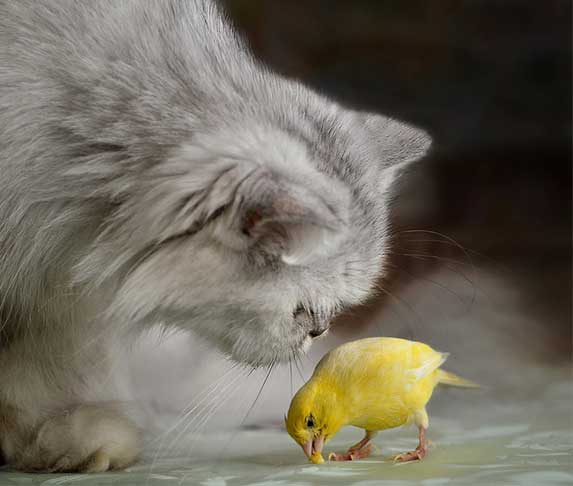 Technically, they can. All a cat needs to do is have the birds notice it so it can stare at the bird right in the eye.

The bird will not even see that it is already flying close enough to the cat.

And before they do, they have already been tackled and caught.

Some cats, especially domesticated ones, do not catch the birds to eat them, but simply because they are fascinated with this small animal that they do not interact with often.

You have to remember that cats are predators, and although they have no intentions of eating the bird, they will still do their best to catch it.

However, not all birds can fall for the beautiful and enchanting eyes of your cat.

Take an owl, for instance. Owls, just like cats, have a predatory nature.

They have sharp beaks, sharp talons and hunt animals like rats, frogs, and birds, but large owls need a huge food supply.

So they hunt large animals, including dogs, cats, and even foxes.

So, can cats hypnotize birds? It depends on the nature of the bird.

If the bird is a small one, then yes, they can easily be hypnotized by cats.

However, if the bird is a huge one or even a carnivorous one, then you have to watch out because your cat’s magic powers will not work on this one.

The next time you are with your cat, and you see an owl around, do not stop to let your cat take a good look at it because that big bird might be on a hunt for its next meal!