Ever wonder if your dog’s heat cycle is causing them to have menstrual cramps?

Well, here is the answer — Many dogs will be in a lot of pain during their heat cycles because their reproductive organs swell up due to all of the estrogen coursing through their system.

This can cause swelling in other parts of her body as well which leads to discomfort and sometimes pain.

Though there are physical differences between a female dog and humans, there are some striking similarities when it comes to things such as the process of reproduction. A female dog’s heat cycle also has a lot of similarities to the menstrual cycle of a female human being.

During the menstrual cycle, a female human will experience cramp pains-with the pains varying in different degrees from woman to woman. Researchers have found that those hormonal changes cause muscle contractions and uterine spasms (similar to those experienced by humans when they get menstrual cramps).

Therefore, a female dog may also experience cramp pains during the heat cycle.

It is this supposed “cramp pain” in a female dog that can make it cry during the heat cycle.

In this article, we shall explore this interesting marvel of the female dog experiencing menstrual cramps as human females do.

So How Does a Dog in Heat Get Cramp Pains? 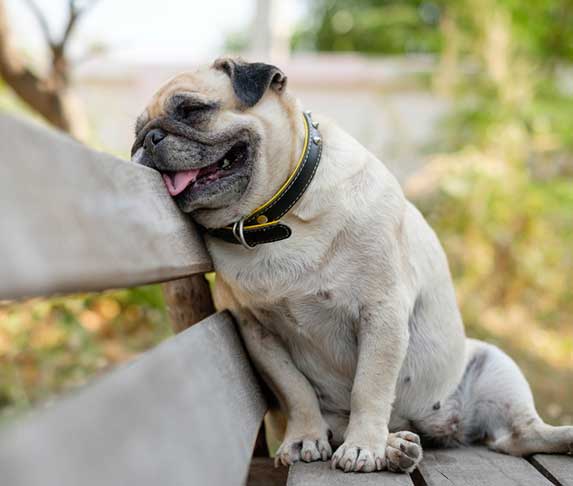 In a female human being, a cramp results when an egg is released but is not fertilized.

Contractions occur so as to shed off uterus walls to allow the beginning of a new menstrual cycle.

These contractions are what will cause cramps in a female human being.

In the case of a female dog in heat, however, it is a sign that the dog is in a phase where they are ready to become pregnant.

The bleeding signifies that they are fertile and ready to reproduce.

In contrast, there is no shedding of the uterine walls here as is the case in humans.

Actually, in female dogs the opposite is true.

Bleeding in a female dog in heat occurs when the estrogen hormone makes the blood vessels found in the uterus become very permeable.

This is to encourage reabsorption of the lining.

Thereafter, the red blood cells then start leaking in what is seen as bleeding.

Essentially, this is what causes the female dog to feel very uncomfortable, feel some pains and discomfort, and even cry during their heat cycle.

Why Do Dog Blow Their Nose? (What Dog Trainer Says)

How to Tell if Your Dog is in Heat

There are a few signs to watch out for if you want to know whether your dog is in heat.

We have already established one of them as being uncontrollable crying.

The crying can be attributed to the discomfort that the dog is experiencing.

The “cramp” pains that they normally experience during their heat cycle can cause some little levels of discomfort just the same way they would in a female human being.

Another symptom is that your dog may tend to urinate more than usual.

You may find that they urinate more frequently than you are normally accustomed to.

Bloody discharge is also another sign to watch out for.

We mentioned earlier that this bloody discharge may be a result of the leaking of the red blood cells when the uterus is reabsorbing the linings.

Not all signs will be physical though.

As the owner of the dog, it is common knowledge that you are aware of how your dog normally behaves.

Your dog may seemingly appear to be more nervous and to some extent, distracted.

The dog may even appear to be increasingly more receptive to male dogs that are found in its surroundings.

They may even display behavior to suggest that they are courting their male counterparts.

This can be seen when they initiate sexual activity such as by raising their rear or putting their tails to one side.

Hormonal changes are responsible for the behavioral changes that are visible in a female dog.

These hormones are also the substances that cause the cramps that are characterized by the contractions of the uterine walls.

The intensity of these cramps tends to reduce when the female dogs have sexual intercourse with their male partners.

Why Do Dogs Cry When They Are in Heat? 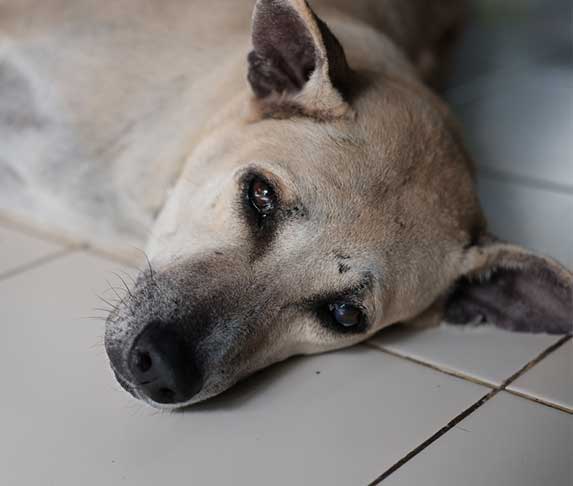 The cry of your dog when they are in heat has been often attributed to the fact that it is their way of signaling to their male counterparts that they are ready to engage in sexual intercourse.

This is the way they communicate to the male dogs that they are ready for reproduction.

Now, it is not everyone that sees it this way.

Other people, myself included, have always perceived this as the surest sign that your “little pup” may be experiencing a lot of pain-extreme cramp pain.

There are a number of tips that you can practice to guarantee the well-being of your dog.

1. Help them to stay calm and relaxed.

This will assist them to temporarily “forget” the pain that they are feeling.

2. You can seek your vet’s assistance on the medication that you can give your dog to relieve their pains.

3. You can have them wear diapers.

These can be reusable (washable) diapers, disposable dog diapers, and even full-body dog diapers.

This will help your dog to stay comfortable through the period when they are in heat.

As we have seen and effectively established, female dogs do get cramps when they are in heat.

Granted, the cramps in your female dog may not be exactly similar to the ones that a female human being may experience.

There are significant differences that exist in both.

One aspect is that the cramps in a human signify the end of a fertile period.

The associated bleeding that comes with it is a sign that no fertilization took place.

On the other hand, in female dogs, cramps and their associated bloody discharge are signs of the beginning of a fertile period for your dog.

It is when it is highly receptive to males for the purpose of reproduction.