Humans have developed different hand and body motions, and voice commands, to communicate with our dogs.

So have our dogs actually developed their own ways of communicating back to us using physical movements.

This includes using their eyes.

So why do dogs wink at you, and what does It mean?

We will answer this question in this article.

A wink is a facial expression where you briefly close one eye, before opening it back up again.

We have many different reasons for winking, depending on the situation.

Depending on the culture and what part of the world a person is located in, people will often have different stories and meanings associated with winking.

We often wink to share an inside secret, or maybe to show affection to someone.

Dogs obviously don’t wink to let you in on a secret, or because they are flirting with you.

So why do dogs wink?

Why do dogs wink at you? 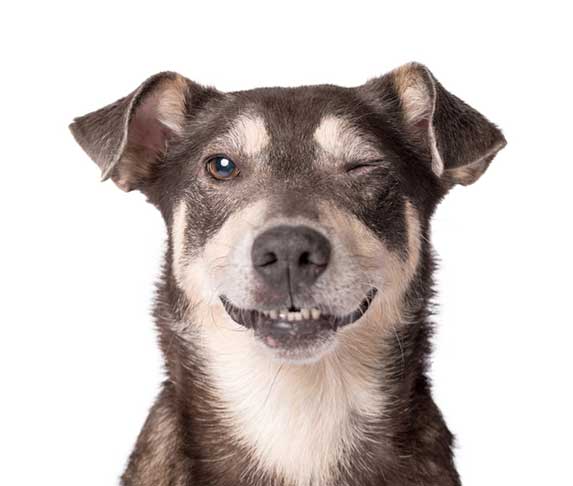 Winking is a facial expression for dogs, just like us humans, and dogs wink the same way we do; by quickly closing and opening one eye.

Normally when a dog winks, it is a sign of good intention and peace, or that the dog is happy.

It can, however, also be due to a painful medical condition — but that is rare.

Here is a list of a few of the main reasons why your dog might be winking at you from time to time.

Sadly, there is a chance that those super cute winks can be a sign of serious health issues regarding your dog’s eye.

It can look like the dog is winking or closing one eye momentarily because of irritation.

The irritation could e.g., be from something that is in their eye, like a hair, but it could also be because of a chemical that is annoying the dog’s eye.

The quick and repeated wink could also come from a scratch in the eye, or because someone accidently poked the dog in the eye.

There can be many reasons why your dog’s eye might hurt, but if its eye is hurting, you can be sure that your dog will wink, or just continuously close that one eye that is hurting.

If the dog is having a problem with the eye, you will most likely also notice that the dog is scratching the eye with its paw, or maybe is trying the rub the eye on things like a rug or furniture.

“Entropion” is a condition that also can cause dogs to blink.

This condition is more common in brachycephalic dog breeds, which are dogs with those short heads, like pugs, French bulldogs, and so on.

Why is My Dog So Cuddly All of a Sudden?

In the case of entropion what happens is that the eyelid flips inwards.

This causes the hairs of the eyelid to hit the eye, which can be very annoying for the dog.

As you probably could imagine, having hair that is stuck in the eye or rubbing the surface of the eye isn’t a very comfortbale thing, and can actually become very unhealthy for the eye if it stays there for a longer period.

Another condition that can cause the dog to wink is known as blepharospasm.

This condition is a spasm of the eyelid itself. It can be described as a twitching-like movement, which can look a lot like a wink.

If you happen to notice that your dog is winking a lot, you should contact your local veterinarian.

They will check your dog, to make sure that it isn’t winking because of any condition.

If they find that it is because of a condition, they can give the dog the relief that is required to make sure that the condition doesn’t further damage the eye.

2. Winking as a submission tactic

Dogs can also wink as a submission tactic.

Dogs do not use eye contact and facial expressions the same way as we humans do.

An example could be that we humans consider eye contact to be respectful and engaging when we are talking to each other.

Dogs, however, consider eye contact and staring to be a sign of aggression and dominance between each other.

This is, however, only between the dogs themselves.

If your dog stares at you, it is most likely not because they want to fight you.

You will probably also notice that the dog won’t keep eye contact for a very long time.

If you try to keep eye contact with your dog, you will probably notice that it will give you a quick wink, or maybe just look in another direction.

This is a sign of submissive behavior, as it is treating you as the dominant one in the family. 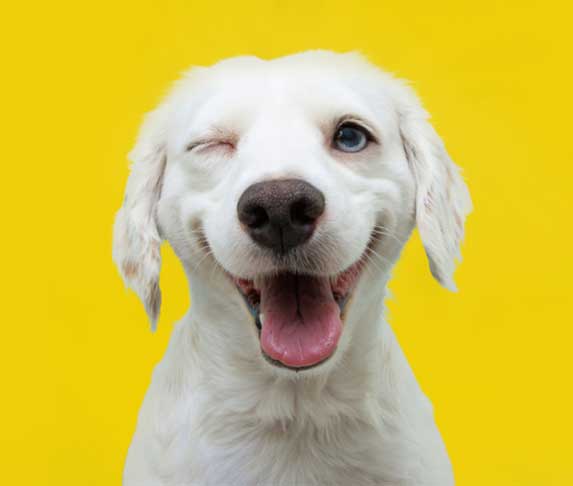 They can quickly piece things together and will notice what actions that will give them some extra attention.

If they notice that winking gets a reaction out of you and that reaction is a reaction the dog like, it may intentionally begin winking to you to get the same kind of reaction from you again.

4. Winking because you are winking

Dogs sometimes have a tendency of showing copycat behavior in regard to their owner.

This means that a reason your dog might be winking to you can simply because it is copying your behavior.

Most dogs are very intelligent and can try to mimic or imitate the things that they notice around them.

An example could be that dogs often want to eat when you are eating, yawn after you just yawned, and go to sleep when you are going to sleep.

The same goes for smaller physical behaviors like winking.

If you are winking to your dog, there is a chance that the dog might wink back at you simply because it is mimicking your behavior.

There can be several different reasons why your dog is winking at you.

While we humans wink as a way to show affection, or maybe share an internal secret, dogs wink for other reasons.

If your dog is winking on a consistent basis you should take it to the vet.

There is a small danger that the dog might be winking due to a medical or health issue, and you should try to figure out if that is the case as fast as possible.

The dog could, however, also just be winking to gain attention, or do it because you are winking.