What do you get when you cross an Australian Shepherd Mix with a Chihuahua?

Easy, a tenacious, fluffy, and little mutt with bursts of energy in him.

Welcome to the world of the Australian Shepherd Chihuahua mix. 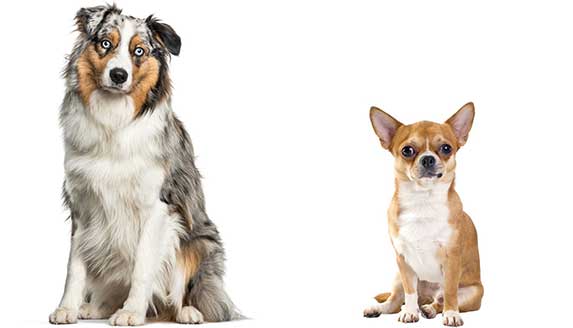 Contrary to the name, the Australian Shepherd is believed to be of Spanish descent.

Shepherds migrating to America through Australia brought the then Spanish Shepherd dog with them.

It was not until the 19th century that this unique Shepherd dog became noticed.

Chihuahuas, on the other hand, are natives of Mexico.

They became popular and found their way to other parts of the world.

People marveled at how huge a Chihuahua’s personality is despite their small stature.

His other names are;

Here are 7 interesting facts that make the Aussie Chihuahua an amazing designer breed to own.

In terms of looks, the Aussie Huahua is taller than a Chihuahua but shorter than an Aussie Shepherd.

He has the small tiny face of a Chihuahua and the unmistakable big Chihuahua ears.

All Aussie Huahua dogs inherit the fluffy coat of the Australian Shepherd dog.

An Aussie Chi’s coat is either tri-colored or bi-colored.

The tri-colored coat will have a combination of three of these colors; red, blue, white, and black.

In the same way, the bi-colored coat will combine two of the mentioned colors.

For the lovers of dotted coats, an Aussie Chihuahua also comes in a red or blue merle coat.

The Aussie Chi walks with the gait of a Chihuahua and the alertness of an Aussie Shepherd dog.

The tail can be erect and curled up like a Chihuahua’s or bushy and droopy like the Shepherds.

From shoulder to paw, an Aussie Chihuahua mix dog stands at 10 to 16 inches tall.

This range sits in the middle of the Chihuahua’s 6 to 9 inches height and the Aussie Shepherds 18 to 23 inches height.

When born, Aussie Chihuahua mix puppies weigh between 1 to 3 pounds.

As it grows older, an Aussie Chi puppy will take the weight of its dominant parent.

If it leans towards a Chihuahua, the puppy will weigh around 8 lbs. as an adult.

But if he takes after his Aussie Shepherd mum, he can weigh as much as 30 lbs.

An Australian Shepherd Chihuahua mix is a high-energy dog.

If you are going to get one, be ready to provide endless hours of exercise and training.

This dog is very smart and thrives on mental stimulation.

Indulge him in simple-to-complex games that will engage his faculties fully.

Born of an Aussie Shepherd parent, an Aussie Chi will always crave the outdoors.

If you frequently go on hikes, always take your Aussie Chi with you.

This helps socialize them to new scents, animals, and people.

As long as he has somewhere to channel all that pent-up energy, an Aussie Chi will always be in its best behavior.

Given that this designer breed is as strong-willed as a Chihuahua, he can show a bit of resistance during training.

Chihuahuas love being in control and will not mind running things if the trainer is not assertive enough.

All About Red Boston Terrier

An Aussie Chi pup sheds year-round and more in Spring when he is molting.

You must brush his coat regularly to keep it smooth and prevent matting.

Also, keep a vacuum cleaner nearby if you are going to co-exist with this furry chap.

Bathe the dog once a while to get rid of dirt and dead skin cells.

Do not use harsh detergent that might strip the natural oils off his coat.

Also, do not wash him too often as this will make his coat dry and flaky.

This prevents the nails from overgrowing and causing the paws to turn outward.

Clean his eyes and eyes for dirt and debris as well.

A good diet and plenty of activity should keep an Aussie Chihuahua mix healthy for life.

But to be safe, schedule annual medical checkups for the pup.

This will help you detect and treat diseases that affect aging Chihuahuas and Aussie Shepherd dogs.

One and a half cups of high-quality dry kibble should fuel an Aussie Chi throughout the day.

If you are feeding a raw diet, put more emphasis on proteins and healthy fats which the dog needs for strength and energy.

An Australian Shepherd Chihuahua mix is the perfect family dog.

He carries the gentles and alertness of an Aussie Shepherd and the brilliance of the Chihuahua.

He has a passion for games and exploring which makes him a great company for kids.

Aussie Chi dogs can live in the country or the city.

Their tiny bodies will fit even in the tiniest studio apartments.

Out in the countryside, he has plenty of scenery to enjoy and forest to explore.

An Australian Shepherd Chihuahua mix is a clever and active dog.

He is ready to keep you company and be the center of your attention.

If you can keep up with his high energy, grooming, and training needs, an Aussie Chihuahua mix is the ideal dog to adopt.

Both the Chihuahua and Australian Shepherd form strong bonds with their owners. This means that an Aussie Chi is likely to suffer separation anxiety if neglected. Early socialization and quality time can prevent separation anxiety.

Is an Australian Shepherd Chihuahua mix easy to train?

An Aussie Chi should be easy to train. He carries the intelligence of a Chihuahua and the endurance of an Aussie Shepherd dog. He also loves to please his owner which makes training easier. But note that he can be stubborn like a Chihuahua.

Is an Aussie Chihuahua mix registered?

Does Aussie-Chi dog back a lot?

How vocal an Aussie Chi dog is will depend on the parent it takes after. Chihuahuas are known to bark a lot and training keeps them in check. Aussie Shepherd dogs are silent and will only bark if necessary. Early training and socialization will help weed out incessant barking.