Various dog breeds are often confused for the German Shepherd. One of these dogs is the Malinois dog which originates from Belgium. Other dogs that look like German Shepherds are Tervuren, Laekenois, Groenendael, and Dutch Shepherd.

The German Shepherd is a large-sized dog that hails from Germany.

He was a herding dog before becoming a sergeant in the First and Second World War.

As his popularity grew, his magnificent gait and balanced temperament became the desire of every dog owner.

According to the American Kennel Club, the standard German Shepherd has a muscular well-balanced body with smooth outlines rather than sharp angles.

The back curves and lowers towards the hindquarters.

The face is wedge-shaped with a long narrow muzzle and erect ears.

A German Shepherd qualifies as one if it passes all the required standards from the American Kennel Club. If not, then the dog is a semblance of the German Shepherd.

Here are dogs that look like German Shepherds but do not meet all AKC standards; 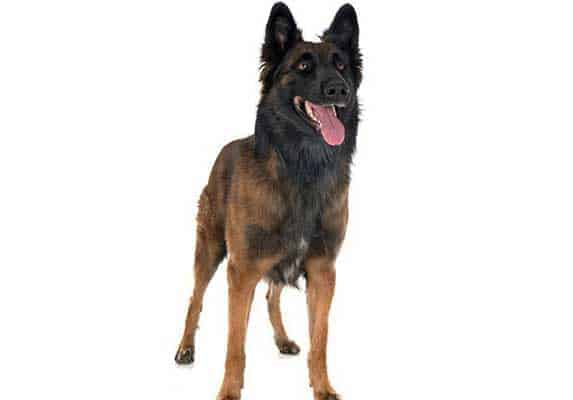 Though he is often mistaken for a Shepherd, his coat has a unique texture and color that is not the German Shepherd standard.

Tervuren is a Belgian canine that leans more toward the Malinois in terms of looks.

He has lots of energy in him and is alert enough to pass for a guard dog.

But do not count on a Tervuren to chase after an intruder.

He is a laid-back dog that lacks the prey drive of a Shepherd or Malinois. He still makes a good family dog. 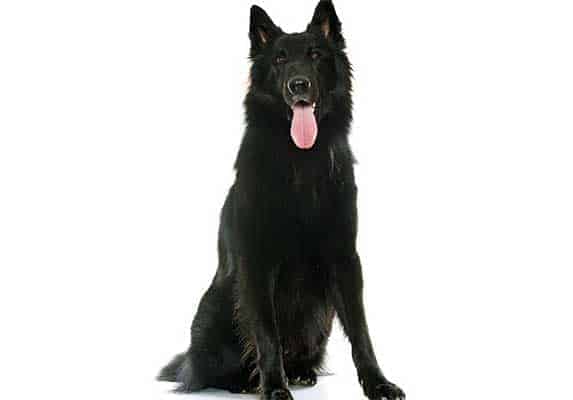 The Groenendael is part of the Belgian shepherd breeds.

He too, like the Tervuren, has a unique coat that is full black.

Compared to the German Shepherd’s coat, a Groenendael’s coat has longer and smoother hairs.

Groenendael dogs are as energetic and mischievous as German Shepherd dogs.

They are also very intelligent and respond well to affection.

They reserve affection for their owner and are likely to suffer separation anxiety if separated from them. 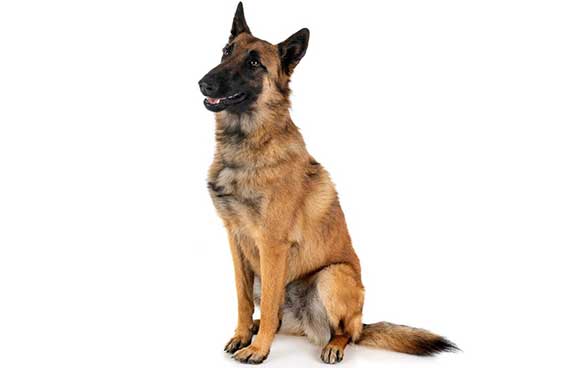 The Malinois is every inch a German Shepherd save for his posture and coat color.

His coat has thinner hairs and carries more brown color than a Shepherd’s.

Malinois makes an excellent working dog especially in the narcotics unit of the police.

Like a Shepherd dog, he is also smart and responds very well to training.

But training a Malinois requires spending more time with him. He will only obey the person he strongly bonds to. 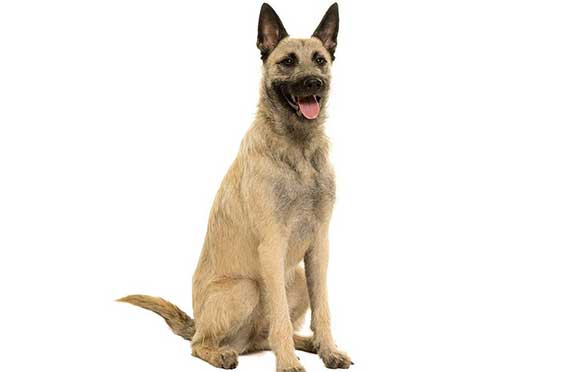 The Dutch Shepherd nearly passes for a German Shepherd save for his bushy muzzle.

He also has a dominant brindle coat that is curly as opposed to Shepherd’s straight-haired coat.

His temperament is not far off as he likes to hang out with children and form strong bonds with his owner. 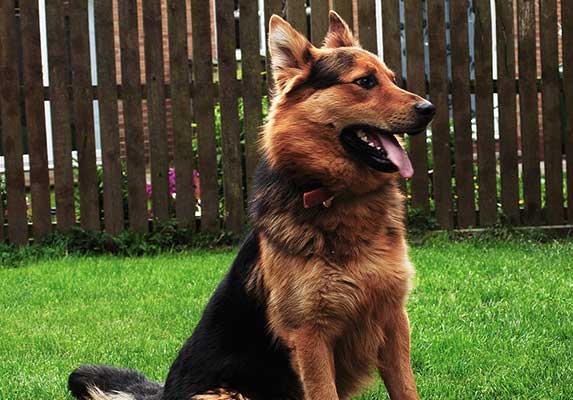 The American Alsatian takes the prize for looking more wolf-like than the German Shepherd.

He is larger than a German Shepherd and is capable of weighing up to 100 lbs.

A closer look at him and you get hints of a Shepherd and Malamute dog.

Some American Alsatians have some English Mastiff features too.

He may be towering with a wolf-like demeanor, but the American Alsatian is a gentle giant.

He is friendly and very docile since he is not bred to be a working dog. 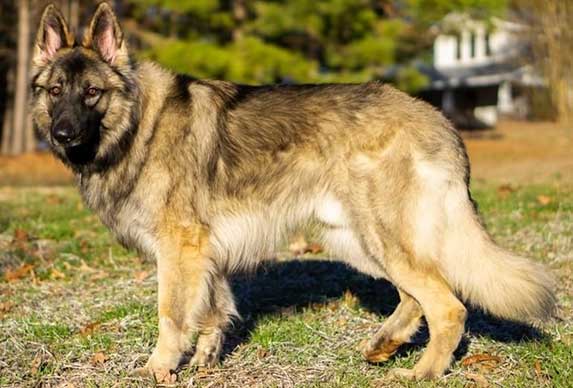 As one of the dogs that look like German Shepherds, the Shiloh is an actual extension of the Shepherd.

This dog is meant to be larger and reduce the health problems frequently associated with German Shepherds.

He also has a thicker and softer coat compared to the standard Shepherd dog.

If you want a calmer GSD, then do adopt him. 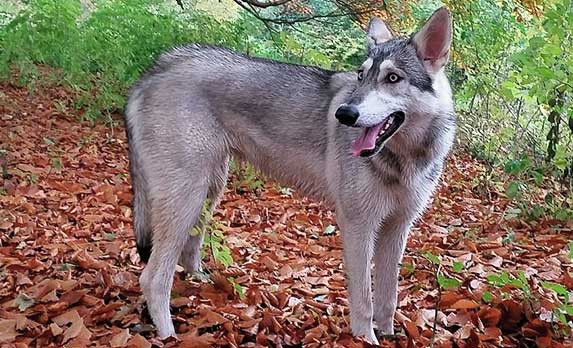 He is a close cousin to the American Alsatian because they share the same wolf-like traits.

The Northern Inuit is a real wolf hybrid without the English Mastiff features of the American Alsatian.

Selective breeding through the years removed all the health and behavioral problems of the first Northern Inuit.

But one thing this German Shepherd look-alike has maintained is his stubbornness.

He has the strong independence of a wolf and can be difficult to train. 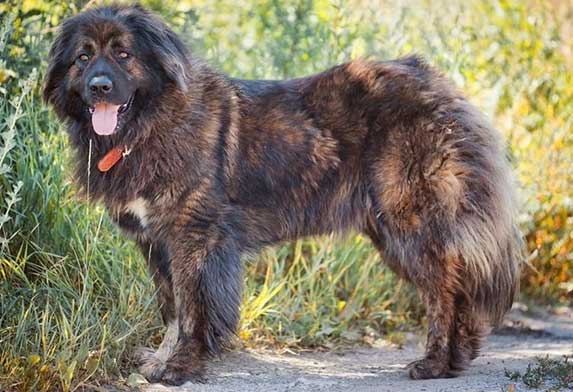 He is bigger and has thicker and rough fur as well His tail is bushy and his back does not curve downwards like the GSD.

But if you are looking for a fear-instilling guard dog, get yourself the Caucasian shepherd dog.

You might also know him by the nickname “Mountain Dog”“. 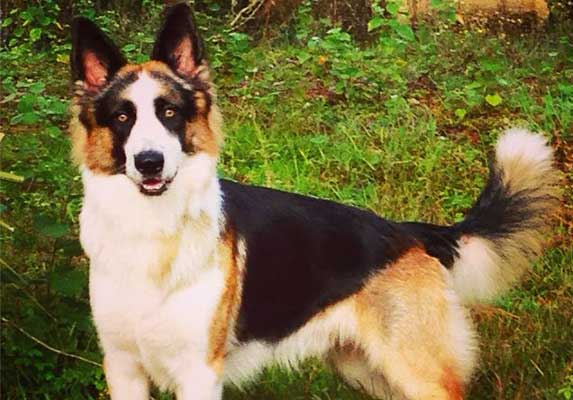 He has the face of a German Shepherd but with a uniquely colored coat.

The American Kennel Club does not recognize him and he is extremely rare to find.

What makes a Panda Shepherd stand out is the great amount of white in what would have been a saddle-colored coat.

Nonetheless, he is as intelligent and easy to train as the German Shepherd. 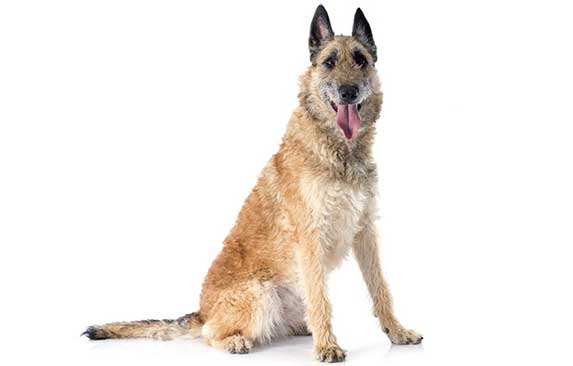 The Laekenois looks like a German Shepherd with a roughed-up coat.

Instead of the medium straight-haired coat, his is wooly and wiry.

But despite the scruffy look, a Laekenois has a heart of gold and will always respond to and reciprocate affection. 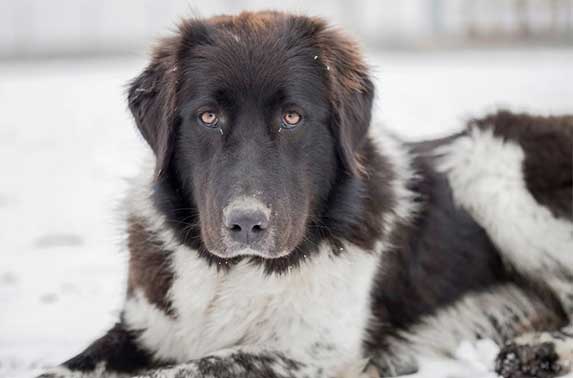 Carpathian Shepherd is another towering giant with a thicker and wooly coat.

He has the face of a German Shepherd but his ears are floppy instead of erect.

Like the American Alsatian, he is capable of hitting the 100 lbs. weight mark.

Intelligent, calm, and loyal are three words that best describe a Carpathian Shepherd. 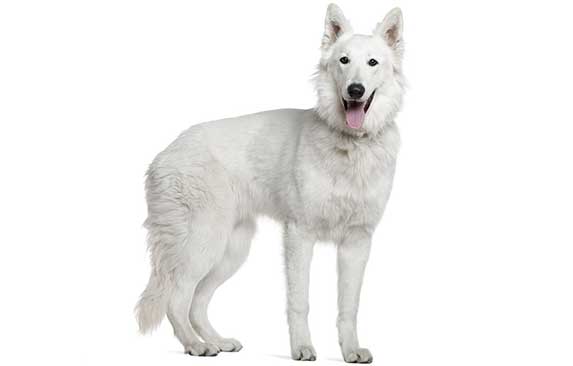 He is commonly mistaken for a white shepherd.

But a Berger Blanc Suisse dog has a straight back and is not curved like a German Shepherd’s.

His temperament is quite different as well.

He does not carry the dexterity and curiosity of a German Shepherd.

A Berger Blanc Suisse is more relaxed, affectionate, and great with children. 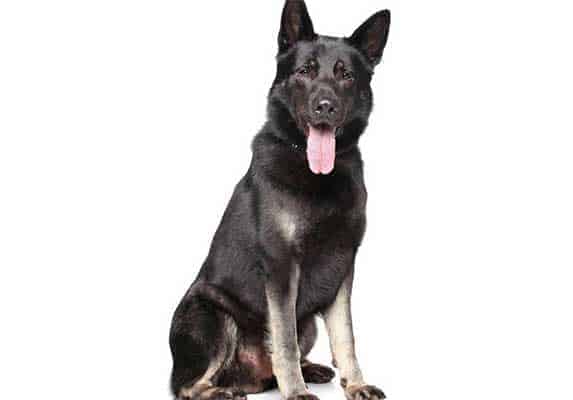 This is the only dog on this list that got all the German Shepherd features right.

The main differences are his larger size and thicker coat designed for withstanding colder regions.

He also comes from Russia as opposed to Germany. 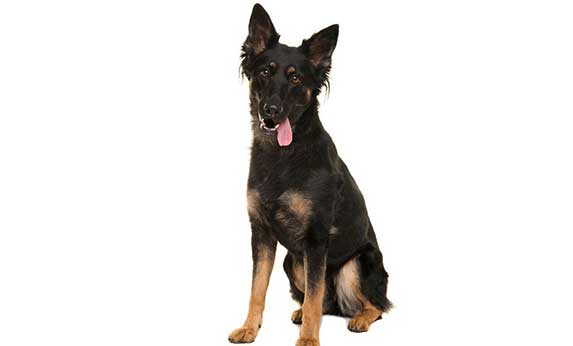 History hints that the Bohemian Shepherd may have been around longer than the German Shepherd.

He is smaller in size compared to the standard German Shepherd and has a thicker and longer coat.

His main coat color is black with red accents.

They are also mild-tempered making them ideal family dogs. 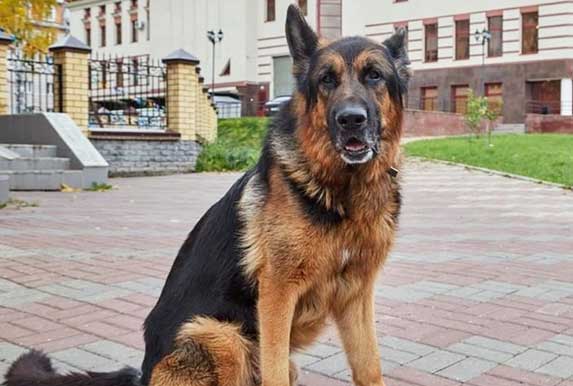 From afar, he looks like the black coat German Shepherd.

But move in closer and you will notice he is way bigger than a German Shepherd.

A King Shepherd can grow bigger and weigh as much as 150 lbs. He is a working dog and he makes a good guard dog as well.

A king shepherd is also friendly and welcoming to strangers.

They may not pass the AKC standard for a shepherd dog, but they will still win you over with their gentleness, affection, and loyalty.

Does a German Shepherd make a good family dog?

German Shepherds make great family dogs if they are trained and socialized while they are puppies. A German Shepherd will only be aggressive when protecting those they love.

What type is my German Shepherd dog?

How do I know if my German Shepherd is purebred?

Is an Alsatian and German Shepherd the same?

The Alsatian and German Shepherd are the same dog. The name Alsatian was used by the British in the World War naming the dog after the French-German border of Alsace Lorraine. Later the name changed back to German Shepherd.