If you have been looking to adopt a guard dog, you probably asked yourself what is the difference between Rottweiler and Doberman.

Both dogs are identical in so many aspects including coat color.

But if you have to choose one dog, who do you pick?

The Doberman and Rottweiler are quite similar in temperament. They are both intelligent, very loyal, and alert dogs. But the Rottweiler is large, brawny, and sheds a lot. The Doberman is slender, faster, and is more hypoallergenic.

Are Dobermans and Rottweilers related?

History has it that these two canines are somewhat related.

But even with identical personalities, there is still a difference between Rottweiler and Doberman that we are going to highlight below. 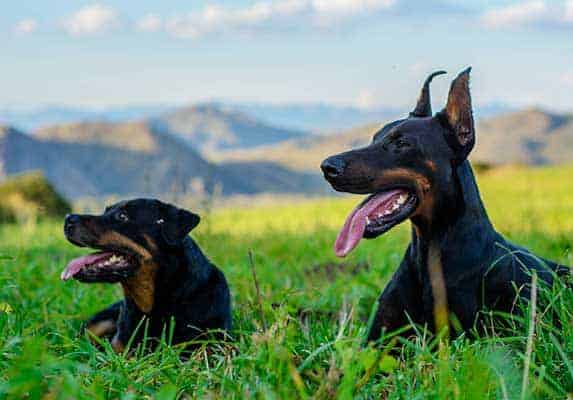 Rottweilers, or Rottie, are originally from Rome.

They were bred for work and to provide protection.

Rottweilers helped farmers pull carts of produce to the market. For this reason, they had to be big and bulky in size.

He bred the first Doberman for companionship and protection.

Though not clear, word has it that the Doberman is a descendant of the Rottweiler, Weimaraner, Beauceron, and German Pinscher. 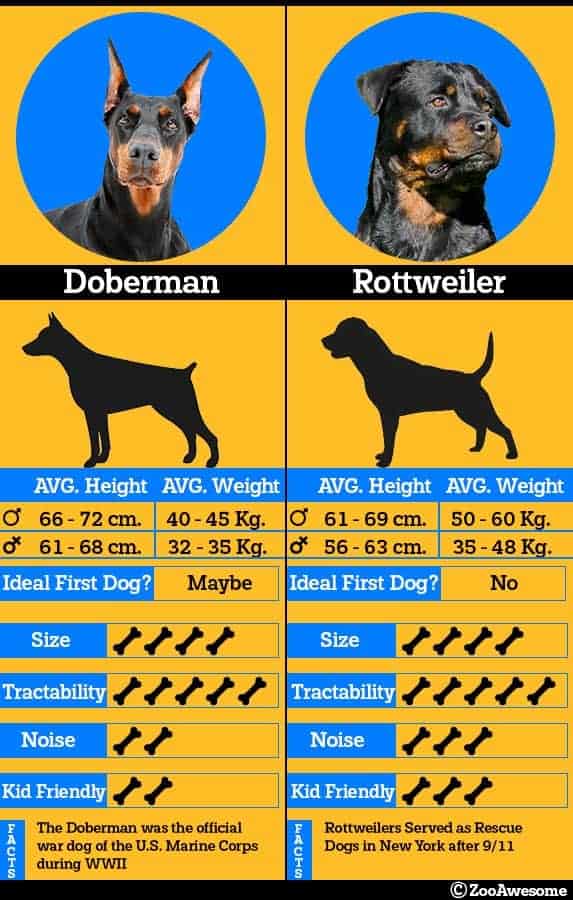 Rotties have a broad square face with a short muzzle.

They have floppy ears and dark round eyes that are very alert.

Also, Rotties have a medium-sized body that is beefy and muscular.

A full-grown Rottweiler grows to a height of two feet and weighs between 70 and 130 pounds.

Rotties have a biting force of 328 pounds.

Rotties have a black coat with rust accents.

These accents are found on the legs, face, and tail.

Dobermans are quite the opposite.

They are strong and muscular like a Rottweiler but have leaner bodies.

A Doberman’s face is narrow with a long muzzle and erect triangular ears.

They are not only fast, but they also have a powerful biting force of 305 pounds.

Both the Rottweiler and Dobberman are highly intelligent dog breeds.

The Rottweiler’s perfect combo of brains and brawn made him a perfect soldier during the First and Second World War.

Today, Rottweilers serve both in the army and police force.

Rottweilers are very easy to train.

They understand commands fast and thrive on consistent and structured training.

Dobermans have the advantage of being smart and super fast.

You can count on a Doberman to watch over your home 24/7 while still being a loving companion to your family.

A Doberman is easily trainable as well.

But you have to be careful, this furry fellow can easily outsmart you in training.

They can easily manipulate a situation to their benefit.

If you are unsure of your dog training skills, you can always hire a professional to train your Doberman.

They are perceived as aggressive and not ideal family pets.

Rottweilers and Dobermans are dangerous dogs if they are not raised right.

A lot of the aggressiveness associated with these two breeds stems from;

Early socialization is the only way to bring out the good qualities of a Rottweiler and Dobermans. 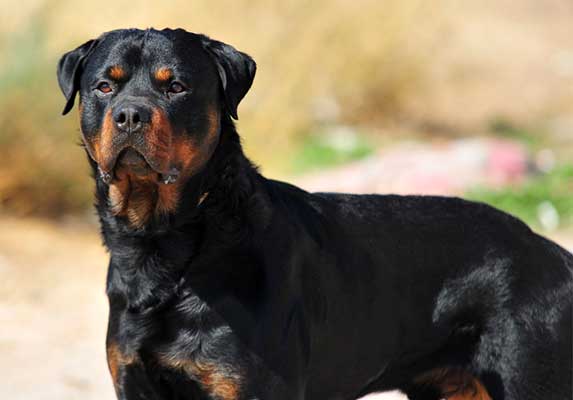 A well-trained Rottweiler is obedient and devoted to his owner.

They love to bask in their silence taking in the environment around them.

Rotties have the potential to be gentle giants, ruthless protectors, or both. It all comes back to training

Rottweilers are very friendly and confident of themselves.

You can count on their companionship and exemplary guard dog skills.

Their willingness to work makes them handy around the home as well. 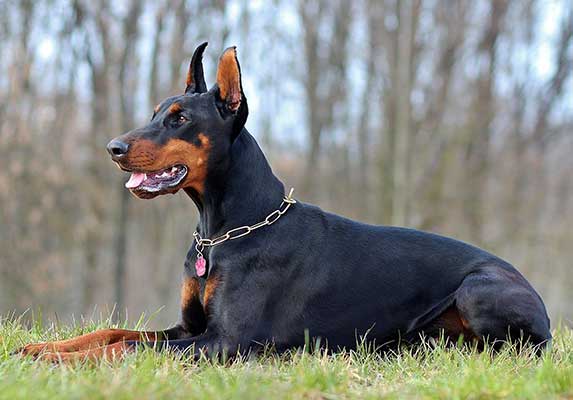 Doberman pinscher dogs are loyal to their owners too.

They form strong bonds with those they love if properly socialized.

Their impressive intelligence makes them the best guard dogs to have at home.

In the eyes of a Doberman, you are an intruder until proven friendly.

They bark excessively and become very aggressive in the face of a potential threat.

This aggressively disappears immediately when it comes to playtime with the kids.

A big difference between Rottweiler and Doberman is in their grooming needs.

Dobermans, on the other hand, shed minimally making them the best for people with allergies.

Rottweilers and Dobermans are high-performance dogs.

They require food rich in proteins and healthy carbs to fuel their active lifestyles.

High-quality dry kibble is the best food for both breeds.

If you are switching them to raw food, consider feeding them lean options of beef, turkey, and chickens. Offals are great too for both dogs.

Between the two, a Rottweiler is the heartiest eater.

You have to watch his diet so he does not gain a lot of weight.

So, between Doberman or Rottweiler who is a better guard dog?

The answer is both make great watchdogs because they were bred for work and protection.

But if you want a dog that will not outsmart you, a Rottweiler is the best.

Also, if shedding is an issue for you, a Doberman is more hypoallergenic.

Is a Rottweiler the strongest dog in the world?

The Rottweiler comes second as the strongest dog in the world after Saint Bernard. Other strong dogs in this group include Irish Wolfhound, Rhodesian Ridgeback, and Boxer.

Are Dobermans and Rottweilers related?

Rottweilers and Dobermans are not related. The Rottweiler hails from Rome while the Doberman is German-bred. But rumor has it that a Rottweiler is one of the dogs used in breeding a Doberman.

What is the major difference between Rottweiler and Doberman?

The greatest difference between Rottweiler and Doberman is in their weight. Rottweilers are heavier and more muscular compared to Dobermans. Dobermans are leaner but move faster than Rottweilers.

Doberman vs Rottweiler, who is more dangerous?

Both dogs are ferocious especially when fighting a threat. But a Doberman is more intelligent in knowing how to interpret a situation before attacking. Rottweilers have a powerful bite that will pin any intruder to the ground in minutes.