Known as having one of the rarest colour variations of German Shepherds, the Isabella German Shepherd has a dilute coat of lilac which results form a combined effect of blue and liver dilution.

Read more to find out more information about one of the rarest German Shepherds, the Isabella.

History of the Isabella German Shepherd

This breed’s color has been said to have existed as early as 1892, when the Spanish Queen, Isabella, noted that she would not change her gown until Spain had prevailed during the Siege of Granada.

Her pledge resulted in her dress changing to reddish color, resembling the Isabella German Shepherd’s color.

Many would begin interchanging the word Isabella to describe the color.

While other historians may note that Isabelline could have stemmed from the word “Zibellino”, describing the color of animal pets which were popular in the 1600s.

The Isabella German Shepherd are medium to large sized dogs, which can stand up to 26 inches for males and 24 inches for females.

Similar to a purebred German Shepherd, the Isabella is graceful, athletic, and muscular.

They have a long muzzle with a square head and pointed ears.

Their tails are long and bushy too.

Their nose, unlike purebred German Shepherds, is reddish or brown with sea-green or blue-green eyes.

While most of their physical appearances resemble a purebred, their color comes from the dilution of the loci and liver color in any dog.

Dogs have color genes that can be found in specific locations or loci in chromosomes.

These genes dictate what color the dog’s coat will be.

They also have a long coat which can be either straight or coarse.

Like purebred, they have double-coats to protect them against harsh weather conditions.

To groom your Isabella German Shepherd, you will need to brush them daily to help reduce its shedding and keep it healthy, while bathing them should only be done when necessary.

Remember not to over bathe them, as it could lead to skin irritations as it over bathing will strip the dog’s coat of its natural and essential oils.

All About Corgi and Beagle Mix (Corgle Facts To Know)

The Isabella is confident, loyal, and patient.

They are also great working dogs with a strong instinct of defending their owners.

As Isabella German Shepherds are highly intelligent with a strong work ethic, they can be easily trained.

If trained at an early age, these dogs can be highly social and reduce their wariness towards strangers.

It is important to introduce them to different people and environments.

Do note that this breed does not like to be left alone for a long time and it can result in separation anxiety.

This can also lead to them being destructive around the home.

These dogs require a high-protein diet that provides them with enough energy to keep them going for the day.

A raw meat-based diet is usually recommended for an Isabella German Shepherd.

As some raw diets do not have enough essential nutrients for your dog, you may need to give them additional supplements.

Do remember to consult with your vet before making changes to their diet.

As Isabella German Shepherds are of high energy, they should be fed twice a day as adults and 3 to 4 times a day as puppies.

This breed, like its purebred counterpart, needs regular exercise and physical stimulation.

As they are full of energy, they make great running and hiking companions.

Taking them out for exercise and giving them engaging toys can help to keep them busy.

As the color of their coat does not affect their health, the Isabella German Shepherd should not have any more health problems than other German Shepherds.

If you are thinking of getting an Isabella German Shepherd and are unsure about any potential health problems, do go to a reputable breeder to avoid unethical practices which could lead to detrimental health conditions.

How Much Do They Cost? 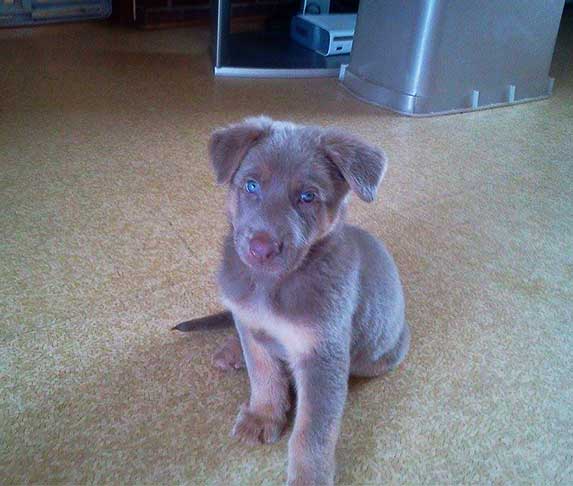 While this rare breed may seem expensive, they typically cost around $1500.

However, do note that the price of Isabella German Shepherds, like all other breeds, may vary depending on the breeder and your location.

As mentioned, this breed can be prone to health issues when it is bred in an unhealthy condition.

So do remember to check that the breeder is qualified and reputable before purchasing one. Alternatively, you can ask a vet to help direct you to a breeder that is qualified.

Do note that the Isabella German Shepherd is not recognized by major kennel clubs.

This is as its unique color is not “accepted” as a German Shepherd color.

An Isabella German Shepherd is exceedingly rare with its unique color variations carried by their recessive genes.

They are highly affectionate and social with the right training.

There are multiple pros and cons towards Isabella German Shepherds if you are thinking of getting one.

This breed is great as a family dog, as they are loyal and lovable to their owners.

They are also intelligent, making them easily trainable.

However, these Isabella German Shepherds do not tolerate being alone and may result in them having separation anxiety or being destructive in the home.

They are also filled with energy, meaning that they require high amounts of physical activity.