Foxes are just as awesome and cute looking as dogs do.

From the non-expert perspective, they are no more than just a different breed of dog.

That might be so if not for their white-tipped tail that gives away their identity.

One might even mistakenly classify them as Shiba Inu.

But despite this, foxes are wild animals while dogs are mostly domestic. It can make you wonder if when both species see each other, will the fox attack? Well, typically they will not unless the dog corners it and they act in self-defense. 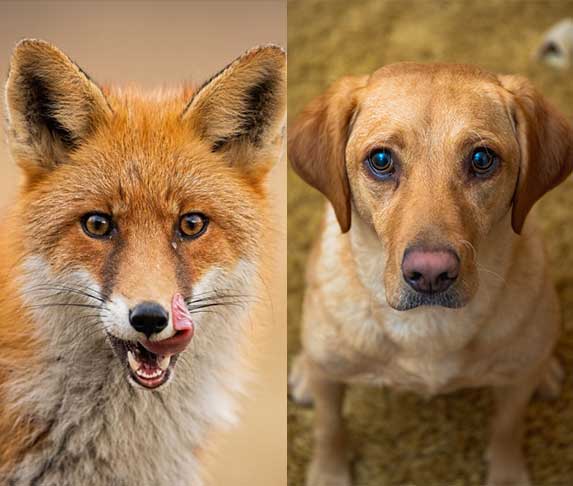 If we will be all technical and understand the differences between dogs and foxes from a taxonomical perspective, we will see that dogs and foxes are indeed cousins!

Both came from the Canidae family but have different genus and species.

Dogs are Canis lupus, while foxes are Vulpes vulpes.

Dogs belong to a different genus and species as foxes.

Nevertheless, the taxonomic relationship and their physical resemblance are noticeable.

Other key differences include:

Can Foxes Be Domesticated?

With their cute looks and small stature, you will want to keep one for yourself.

We understand. And if you belong to states where owning a pet fox is legal, then you are lucky to have the right to own one.

You have the right.

But that does not mean it is the right thing to do.

Even pet owners of foxes suggest against doing such.

Take the owner of the IG famous Juniper the Fox.

She reiterated the reasons why one should give good considerations if people plan on taking in pet foxes.

According to her, they are nippy creatures, which means contracting rabies is a plausible outcome.

Additionally, they are noisy and very smelly. As mentioned above, their fluid emissions are skunk-like.

What makes it worse is that their wild nature manifests even though raised in a domesticated environment.

External factors easily stress them out, they are irritable, and the standard outlet for this is destructiveness.

With that, enclosing them in a small enclosure will only trigger wild behaviors. 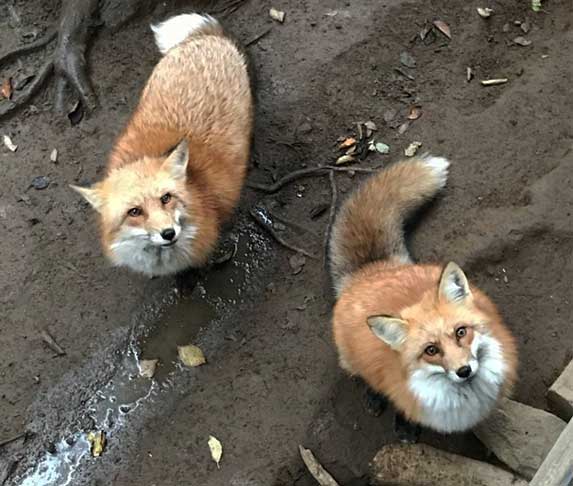 Given their shy disposition, the typical response of foxes to humans’ presence is to flee (rather than fight).

If they happen to detect your presence, relax because they would instead run away.

It is one of the reasons why they are generally known to be shy creatures.

The only instances that foxes attack humans are first, when rabid, which happens on rare occasions.

Secondly, when they are in captivity.

Although they would instead run than have to face their “predators,” they can put up a fight, nonetheless. Lastly, is when they feel threatened.

Okay, so generally, foxes will not attack humans.

But what about our furry little friends? Are they safe from foxes? Will foxes attack dogs?

Will A Fox Attack A Dog?

If you live near forests or woods with your dog, this might be one of your greatest fears.

To see your dogs threatened or attacked by foxes in the wild.

The simple answer to this is that it is possible to happen.

The following list will give instances or situations that may incite fights among dogs and foxes:

1. Foxes are too pungent

While dogs have their bad smell days, foxes wipe them all out in terms of odor.

And with the heightened sense of smell of dogs, they will likely show their disgust through aggression and growling.

During this case, it is essential to take your pet’s hold and distract them from the fox’s presence to avoid the latter attacking your dog if a fight incites.

Although more likely than not, foxes will not even be close to humans or other animals, which is reasonably avoidable.

2. Foxes’ fear of human or animal contact is a learned behavior

Perhaps it is evolutionary that foxes develop the behavior to keep clear of humans or other animals.

But this comes with age.

Ergo young foxes who have not developed the “shy” disposition towards other species may not even bother to avoid it.

Moreover, if they are in their initial stages of learning to hunt, they can pose dangers to dogs.

Small dogs, or puppies, that are vulnerable to attack might be the targets of young fox cubs learning to hunt unless owners or their parents accompany them.

Is Centipede Bite Poisonous To Dogs?

3. They are both territorial

However, adult foxes are more elusive.

But if they happen to find themselves haggling for the same territory, this may lead to a fight.

Wherein foxes might potentially attack or injure the dog, and vice versa.

4. Foxes are overprotective of their young

Like dogs, foxes are monoestrous, which means they breed only once a year.

And like dogs, they are also protective of their offspring.

That is why foxes choose to nest where they can be protected from predators and adverse environments.

If that is near where a dog lays, then that means the dog can be potentially targeted for attack by the vixen (female fox) as a means to protect their young.

As mentioned above, foxes hunt, but learning how to pursue does not guarantee that they will catch their prey.

Therefore, even foxes that have learned to avoid other animals may potentially attack small dogs to satisfy their hunger.

With the things written above, the chances of foxes attacking dogs are slim to none.

Nevertheless, it does not pay to be cautious.

Never leave dogs, especially the miniature ones, unattended, to be sure.