Do Dogs Think in Barks?

Barks is not required for a dog to think. But a thought usually precedes a bark in the canine world.   Dogs are instinctual A dog’s thought process is governed by instinct. Different situations invoke […] 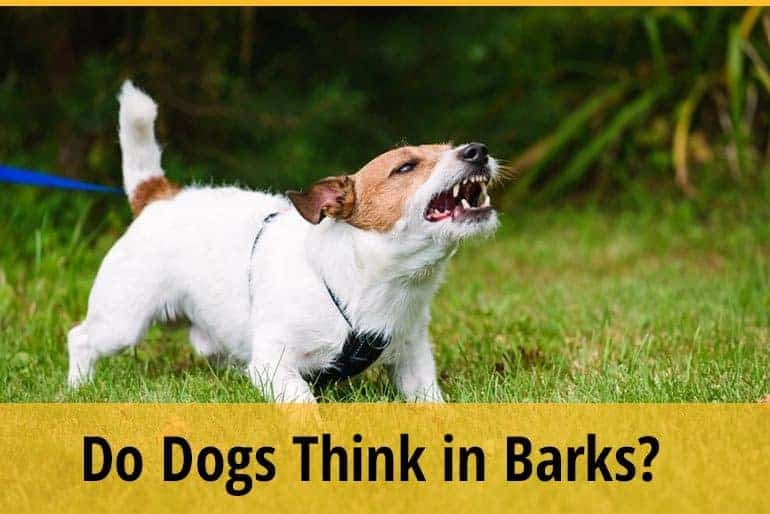 Barks is not required for a dog to think. But a thought usually precedes a bark in the canine world.

Not that barking is not a canine language. Though dogs can understand the human language, they do not associate their barking with words or ideas. Barking to a dog is a form of expression inspired by instincts.

What is my dog saying with his barks?

Dogs use barks to communicate different emotions and situations. This lingo is developed through years of interacting with humans, animals, and inanimate things.

The tone variation in a dog’s bark can tell us what the dog is thinking. There are many forms of barks;

This kind of bark communicates danger. Increasing the pitch of the bark is done to get the attention of the owner. Alternatively, a high pitched and rapid dark can be used to scare an intruder away. Guard dogs will bark and growl to alert the owner and scare the intruder.

Howling speaks distress in the canine world. A dog will howl to tell you that they are in pain. In other situations, a dog would howl to alert other dogs of its presence. It is an SOS signal to locate other dogs of the same pack.

Why Are Dogs Afraid of Brooms?

Barking followed with whining communicated fear and anxiety. A dog will bark to alert you of something they are scared of. Other dogs would bark and whine all day when they are home alone.

This is the only time a dog will think in barks. Studies show that canines dream about what they do during the day. A dog will bark in its sleep if that is what it did during the day. Other pups will whine in their sleep after an episode of barking out of separation anxiety.

Dogs don’t think as humans do. They are led by instinct which tells them what to do next. A bark, therefore, is a product of habitual behavior governed by instinct.