Dogs can be afraid of sounds, things, and people.

One such fear is the fear of brooms. But why are dogs afraid of brooms?

The fear of brooms in dogs has nothing to do with Witches and Halloween.

It has everything to do with;

It is important to socialize a dog early to new sites and smells.

This socialization should be frequent and done in an environment that is non-threatening to the dog.

If your pup runs for it whenever you pick up a broom, it is because he is unsure of it.

But as he watches you using the broom, the dog will soon realize it’s harmless.

If it does not harm its favorite human, then it will not harm them.

Dogs have sensitive ears that can sense even the slightest of sounds.

The sound of a broom brushing against the floor could be too loud for your pup to bear.

Some dogs will flee to the sound of a vacuum cleaner as well.

Why Is My Dog So Stupid? (Know The Causes)

A dog that is afraid of a broom could have had past negative experiences with one.

A rescue dog will fear brooms if their past owners used to beat them with it.

A broom is a symbol of pain and fear for the dog.

Small breeds with traumatic experiences will shiver and whine whenever they see you holding a broom.

Large dogs will destroy the broom to pieces whenever they have a chance.

Socializing your dog to not fear brooms is the only option.

This should be done gradually and in a reward-based manner.

A dog that suddenly becomes afraid of brooms could be having an underlying psychological problem.

Besides a broom, a dog could also be afraid of other objects in the house.

You could also notice other weird behavior like eating rocks or growling at nothing.

Other Reasons Why is My Dog Scared of a Broom? 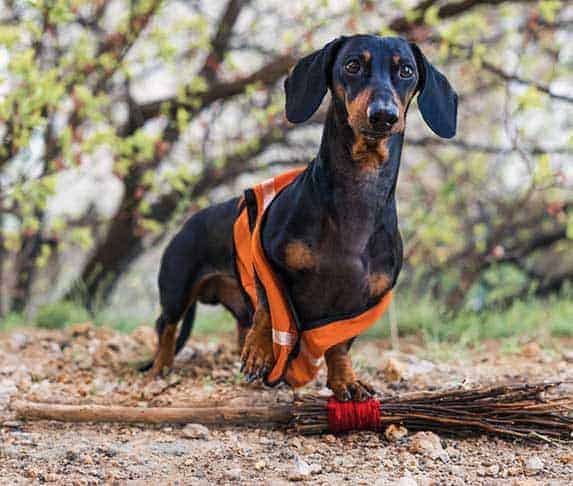 There are many elements that incite fear among dogs. The usual suspects are socialization, fear of sounds, traumatic experiences, behavioral problems.

But recent studies on Great Danes give a glimpse to another potential cause of fear among canines — genetics.

Fear of broom can be genetic

Typically, the environment and socialization practices were blamed when dogs exhibit fearful tendencies, but the 2020 research revealed that there are 2 genomic regions associated with canine generalized fear and sensitivity to sound.

That said, apart from the 4 initial culprits, the research corroborates the hypothesis that fear is an inherited trait.

If mama dog or papa Fido once exhibited fearful tendencies, then the likelihood of their progeny displaying the same is high.

Although like any other genetic trait, some can be alleviated via desensitization tactics.

If your dog exhibits anxiety about the broom, having a treat on hand or their favorite toy can help ease the fear of you picking up the broom.

Giving treats is always a positive thing for dogs, so while you hold the broom, wave your treats at them until they come near you and become more relaxed in the presence of the broom.

Once they have overcome the fear, you may try sweeping the floor while repeating the same treat-giving process.

Finally, you may try to let them touch the inanimate object for them to understand that brooms are nothing to be afraid of.

How to train a dog not to fear brooms 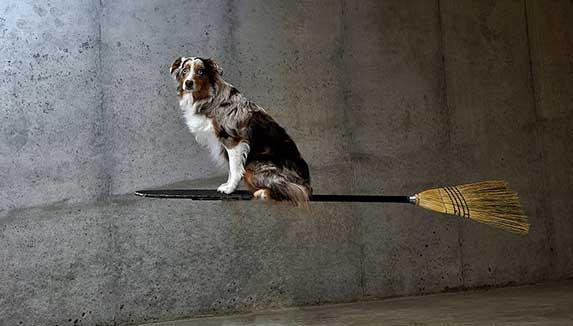 It is possible to socialize your dog to like a broom.

The secret is associating the broom with a pleasant reward like a toy or treat.

1. Next time you pick up a broom, have a favorite toy or treat in hand

2. Let your dog come to you as you stand holding the broom

3. When the dog looks hesitant, wave their favorite treat or toy at them

4. As the dog gets excited, toss the treat to him

5. Repeat this severally until your dog is accustomed to you holding a broom

6. Now try holding the broom and call your dog

7. If they come closer, reward them with more treats

8. Repeat the same procedure when sweeping with a broom

9. With time, your dog gradually learns that a broom is nothing to be afraid of

Distract your dog with a toy or treat whenever you are about to sweep.

This helps them detach from the negative feeling of fear and choose excitement for the toy or treat at hand.

Consult an animal training and behavioral expert if the problem persists.

Also, if your dog shows other weird habits besides fearing brooms, take them to a vet for a checkup.