Cats cannot bark and dogs do not meow.

But somehow, cats and dogs find ways to communicate their thoughts and feelings to each other.

Can cats and dogs talk to each other?

All of the internet we see countless photos and videos of cats and dogs getting along.

Once sworn enemies, it seems that canines and felines have finally achieved a rapport albeit not learning each other’s languages.

As animal experts have found out, cats and dogs can communicate with each other through body language. Both pets learn to interpret each other;

Although dogs are assumed to be bullies of cats, it is not always so.

Studies show that dogs prefer the company of other pets. Cats are a bit more reserved.

But cats are not always welcoming to dogs.

This is especially true of the cat and dogs are getting introduced.

A cat will hiss and slap the dog as a way of telling the pup to back off.

A dog that is displeased with a cat will growl and bark whenever the cat draws near.

In the same way, it is easy to tell if a feline and canine are getting along.

The dog will welcome the cat’s presence and even give the cat licks of appreciation.

The cat raises its back for more petting by the dog.

You will also notice the cat raising its tail as a sign that it wants to play with the dog.

What Language Do Dogs Understand Best?

How do cats and dogs get along? 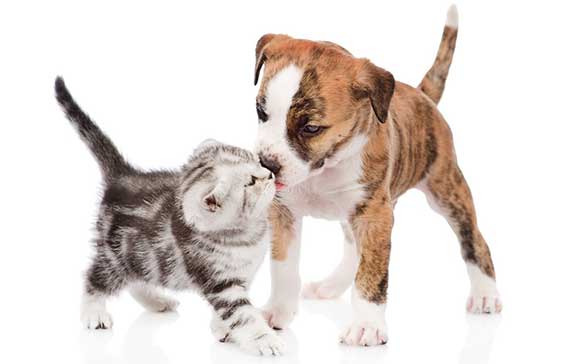 For cats and dogs to get along, they must be introduced while they are pups and kittens.

It is still possible to train a dog to get along with a cat.

But it is advisable to monitor this interaction until you are confident both pets won’t harm each other.

1. Bring the cat to the same room as the dog.

If either pet gets defensive, separate them immediately.

Next switch the dogs so they occupy each other’s previous rooms.

This helps the pets familiarize themselves with each other’s scent.

3. After repeating this for a couple of days, introduce the two pets again.

By this time, they should be accustomed to each other’s smell.

4. If the two pets get along, reward them with treats.

They soon learn that being friends translates to getting rewards.

5. Always monitor the interaction between the two pets for the first few months.

If aggression increases between the two pets, keep them separated.

If need be, enlist the services of a pet trainer to break the ice between the two pets.

So, can cats and dogs talk to each other?

Yes, they grow to understand each other through body language.

But if a cat is constantly fighting with a dog, keep them separated until they are accustomed to each other’s scent.

With time, they will learn to communicate with each other.