Dogs are very social and playful pets especially with their owners or people they are comfortable around.

They can also be very ferocious when it comes to strangers and sometimes, to fellow dogs as well.

This can make it a tad bit difficult to figure out some of the good play behaviors and those that might come off as aggressive.

Good play behavior is important especially when your dog is playing with other dogs.

This helps to reduce conflict between the dogs playing and dog owners.

The conflict between dog owners mostly arises when one of the dogs gets hurt from the play fighting.

Slightly aggressive play behavior that gets noticed is not always bad, but dog owners should be careful when it gets to that.

This is especially when the dogs are not too familiar with each other; they might end up injuring each other in the name of play fighting.

This can make it a bit confusing to figure out what some actions such as biting and nipping mean.

This is because if misinterpreted, it could lead to the harm of one of the dogs or both of them.

So why do dogs bite each others’ ears? Should you be worried? 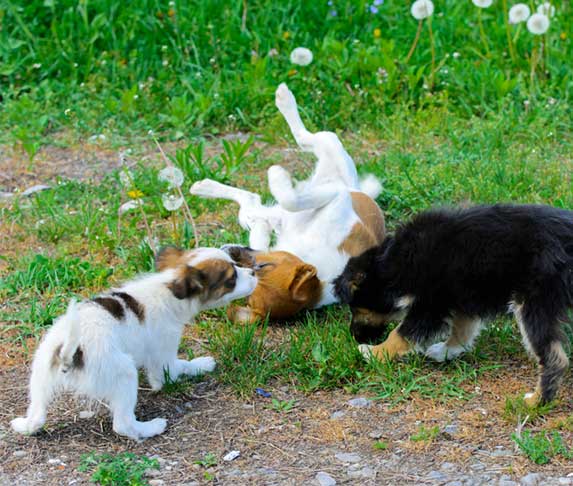 There are several reasons why dogs like to bite each others’ ears and we will go ahead and talk about them below:

1. They bite each others’ ears to assert dominance

This is because, ears are a vulnerable spot for dogs.

They mostly do that just for fun and not trying to start fights or anything.

Most dogs that do this are usually from an older litter just trying to prove themselves, like a way of bullying but just as ego games.

2. They bite each others’ ears to be playful

Dogs’ ears usually are interesting to look at and play with — thus when dogs see especially floppy ears.

They seem intriguing to the dog and many at times, the dogs tend to bite them as a way of showing that they would like to play with the other dog’s ears.

3. They do it when fighting to prevent the other dog from getting a proper bite

When the playing gets too aggressive, dogs bite the dogs’ ears during a fight to prevent them from getting a bite at the other dog.

This particular reason is mainly applicable when the dogs are fighting and have stopped playing.

It can, on rare occasions, apply to when they play fight as well as they try to nip at each other.

Why Do Dogs Become Depressed After Boarding?

4. It can be a way of bonding and between the dogs

Dogs communicate with their mouths through biting.

And thus biting each other’s ears is a way of showing how at ease they are with each other and they feel safe together.

It makes the other dogs know they are in no danger and it’s all fun and play.

5. It is part of socialization

Used by dogs when they try to invite other dogs to play with them.

It’s like a show of acceptance to the other dog that is not part of them.

It also makes them feel comfortable with each other.

6. It is part of grooming

This probably does not make sense to humans, but dogs biting each others’ ears and licking them as well as a way of grooming themselves.

They do that to each other to check for ear mites that are found around the dog’s ears.

Well, some of the dogs just like to eat ear wax for some reason that does not make sense to us.

it probably sounds disgusting but that’s just how it is, they like how it tastes.

Does it hurt when dogs bite each other? 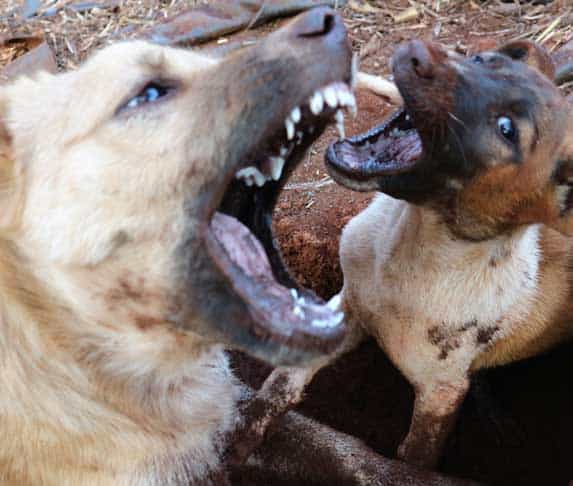 Dogs bite each other mainly during play fighting where the dogs keep biting each other and will take constant breaks from each other to communicate that they are not fighting.

They usually get to understand from a young age the pressure to be applied when biting with the purpose o the bite.

If the dogs biting each others’ ears do not take constant breaks, you might be caught up in a dog fight.

If in your case as a dog owner, the dogs starting yelping or you notice one of them try to get away from the other one, it is best to break the fight and separate them and signal to the other dog owners about the situation.

But so long as there are no visible signs of blood and hostility, the dogs are just playing fighting and you have nothing to worry about.

Should you be worried when your dog does it?

This depends on the situations below:

NOTE: Ear biting amongst dogs is very normal but sometimes the dogs insert their tongues a bit too deep thus causing ear infections in the other dogs. This makes it important to take your dog for checkups regularly for examinations.

It is important to know that dogs mostly use their mouths through biting and nipping to communicate with other dogs.

If there is no cause of alarm, you don’t need to be in distress.

You just let the dog do its thing and make new friends.