Some dogs have been genetically designed to accommodate and adapt to the seasonal patterns in their locality.

These kinds of dogs will have thick furs during the winter season in response to the cold and then shed their fur as the spring onsets and temperatures begin to rise.

But for other dogs without this bodily mechanism, what options do they have?

Some tend to sleep under blankets but for what purpose?

And if they do, will this possibly suffocate them?

You will find out more as you keep reading on!

Why Dogs Sleep Under A Blanket?

Sleeping is a common denominator among living organisms.

Some sleep regularly, some excessively, while some might not even get a wink of sleep and need treatments.

For whatever reason, sleep is essential.

Interestingly some dogs tend to sleep under the covers as humans do.

The reason behind this can be attributed to different things:

Here is a more in-depth discussion of the above items.

It Is Instinctive To Sleep Under Blankets

Before anything else, we must clarify that the blankets referred to here are those found in the owner’s be.

This behavior among dogs can be attributed to dogs’ innate instincts.

Remember that dogs, like their ancestral origin, the wolves, are pack animals.

This same behavior passes on through countless generations, even after domestication.

That is why sleeping under the sheets is just fitting.

As a pet owner, you became a “pack” and other family members, including the dog.

The Temperature Is Just Too Cold To Handle For Dogs

When it is storming outside, and the ambiance of the surroundings is just cuddly, dogs feel the same way.

Nothing would be better than to cuddle with their humans in bed.

Enjoying the sound of the rain while comforted by a warm blanket and each other.

As mentioned in the intro, some dogs have better resistance against fluctuating temperatures than others.

It might just be the reason behind dogs’ behavior of hiding under the blankets.

More often than not, dogs with thick fur covering do not feel the need to be all cuddly under the sheets than other dogs because their hair is enough to keep them warm.

Here are some dogs with thick fur coats:

If your dog has thick fur coverings but still opts to hide under the blankets, then the reason behind this behavior is not due to adverse temperatures but others.

That of which will be discussed more in the following narratives.

Under The Blankets Is Their Safe Space

As tough and fearless as dogs are, they also have soft spots and need to feel safe in their surroundings.

Sometimes, the comfort of the blanket provides just that to them.

Even animals bred to withstand the cold like the Siberian Husky, or the Alaskan Malamute dig and burrow themselves in the snow as a means of insulation and to hide from predators.

Cute animals like Dachshund and Terriers also have a history of tunneling through the soil to hunt or hide from hunters.

The point is that dogs may feel the need to be safe by burrowing themselves not in the soil or snow but their master’s blanket.

When dogs exhibit this behavior, make sure to do the following to let them know that they are safe:

Although keeping them feeling safe and secure is essential.

Do not overprotect your dog as it can develop dependence.

Which is problematic in the long run and in situations that require their independence.

It Is a Learned Behavior

Dogs get used to routine too.

A possible manifestation of this is when they are too fixated on being under the sheets with you. It may be attributed to your behavior towards them when they spend time there.

Suppose you have the knack for giving them treats when they are under the sheets.

Or if you cuddle with them more and play with them while on the bed, then they might associate the space as a place where dogs and humans meaningfully interact.

It can be problematic, but you can counter it with mental conditioning.

Your Dog Has Separation Anxiety

The more end of this behavior is that your dog has Separation Anxiety.

It is extreme because it merely means that it is mentally incapable of being physically separated from you.

As cute as that sounds, it is a behavior that you need to straighten. Counterconditioning can work to fix this behavior. Some strategies you can employ are as follows:

Can they suffocate being under the sheets? 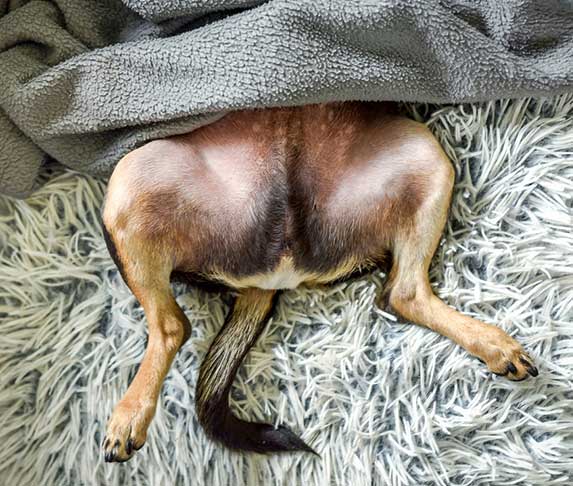 The temperature and the amount of air that passes through will undoubtedly diminish inside the blanket.

It will be an uncomfortable space for your dog if that happens.

But experts say that suffocation is very unlikely to occur so you can relax.

One has to remember not to cover up the sheets too tightly without giving the dog room for exit to avoid them making a big thing out of it.

Sleeping under blankets happens for many reasons.

Whatever it may be, make sure to condition your dogs to establish that the bed is not theirs but yours.

Nevertheless, rest assured that your dogs will be safe under the blankets with you if they decide to sleep there if you allow the behavior.