In the world of dogs, dew claws may be one of the most controversial topics, no matter what breed.

German Shepherds, in particular, are born with dew claws on their paws — especially their front paws. While in the past, these paws were known as having no purpose and should be removed once noticed.

However, these claws actually do have a purpose, regardless of your dog breed.

So what are dew claws, what is their purpose, and should owners remove them?

In this article, you will find out more about what dew claws are, their purpose, and if they should be removed.

Read more to find out!

What are Dew Claws? 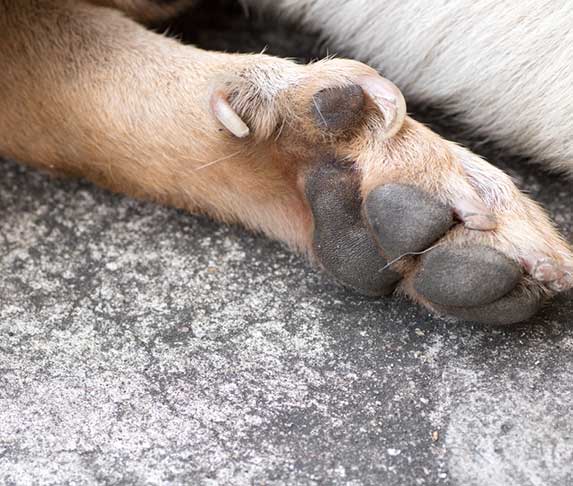 Dew claws are short nails located on the side of your dog’s paw that does not touch the ground.

These claws are also known as a dog’s thumb, although they have less purpose than a human thumb.

These claws are also seen as a little toe, sitting higher up the leg and away from your dog’s paws.

While some dogs may have this ‘little toe’ tightly attached, others are loose.

To check if your dog’s dew claws are tightly or loosely attached, you can check if their dew claw is able to be wiggled.

Most dew claws that are attached to your dog’s rear legs tend to be only attached by the skin.

As mentioned above, most dogs have dew claws on their front paws more than their back, while others don’t have them at all.

Some dog breeds are also more prone to dew claws than others, including German Shepherds.

As most German Shepherds have this gene, they typically will grow dew claws at one point in their lifetime.

As hind dewclaws are mostly genetic, they do not serve any useful purpose.

Dogs, in this case German Shepherds, have dew claws that serve particular functions.

One of which includes grip and stability while running and playing.

According to Pet MD, when dogs move at high speeds, these dewclaws provide extra traction and help stabilize their carpal (wrist) joint.

Some dogs also use their dew claws to help them club trees, hold objects… or climb out of the water.

Having dew claws will help your German Shepherd by giving them friction and helping them stabilize their joints whenever necessary.

This means that removing them may put them more at risk of injuring themselves.

Should You Remove Dew Claws?

In the recent years, many dog owners have removed their dog’s dew claws.

There are actually 3 main reasons as to why German Shepherd owners would remove their dog’s dew claws.

For German Shepherds, the breed standard requires dew claws to be removed on the hind paws.

While this is the standard for their hind paws, it is not a standard requirement for their front paws.

However, do note that there are some purebred dog breeds that allow dew claws to remain.

Some breeders may have their puppies dew claws removed when they are born to prevent injuries such as:

These injuries may occur when German Shepherds run or play.

If their dew claw catches on something, they can easily get caught on furniture and fences.

Injuries may also occur if the nail gets too long and owners forget to trim them.

Some owners may find that their German Shepherd’s legs look cleaner and more attractive if their dew claws are removed.

This could be the case especially if their German Shepherd is in a dog show.

When and How Should Dew Claws be Removed? 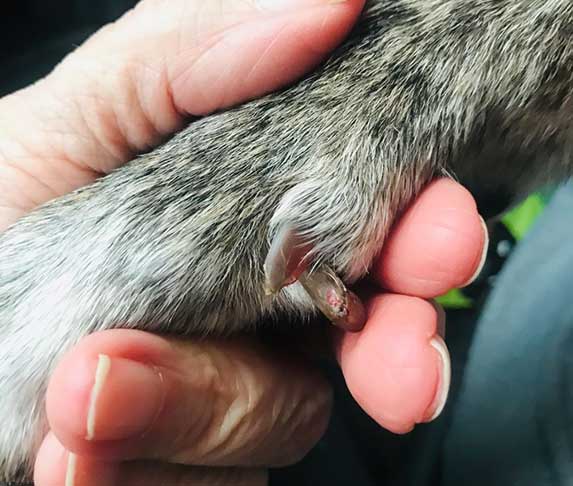 If breeders decide to remove their puppies dew claws, this process should take place 1-3 days after birth.

Some owners also decide to remove their dog’s dew claws when their dog gets spayed or neutered under anaesthetic.

Remember that removing your German Shepherd’s dew claw is considered an amputation.

Thus, a general anaesthetic is usually required for the removal process.

This process can be painful for your German Shepherd both physically and mentally — especially if they have been relying on their dew claws.

The process of removing dew claws do not cause any ill effects.

For puppies undergoing dew claw removal, their pain is minimal as their bones and muscles are still underdeveloped.

As for adult dogs, their pain is more apparent however local anaesthesia is usually used.

As dew claws are like toes, they do grow nails and catch on to things easily if not cared for.

Remember to clip their nails when grooming your German Shepherd to prevent their dew claw toenail from tearing.

By clipping your dog’s toenails regularly, you will help to keep their dew claws safe and healthy.

If your German Shepherd’s dew claw breaks, they will be in pain and will need treatment and possible surgery.

Depending on the severity of the situation, their dew claws could either be trimmed or completely removed. So do remember to keep their paws healthy!

To check if your German Shepherd is using their dew claws, you can check their nails to see if it is damaged or “used”.

Whether you decide to remove your German Shepherd’s dew claws is ultimately up to the individual.

However, before you do, ensure that you do research on where they are located on your German Shepherd, what they are used for and why removing it can be seen as a controversial issue.

Ultimately, owners should make the best decision for your dog.