German Shepherds, among other dogs, can be highly expressive through their body language and behavior.

While some expressions may seem obvious, such as tail wagging, not all expressions are what it seems.

Known as one of the most popular dog breeds in America, German Shepherds are known to be intelligent, courageous and active.

They are great students, with the ability to learn quickly and adapt to their training.

This breed of dogs originated only in 1899 and was originally trained for herding sheep.

You might notice that your German Shepherd may occasionally give off subtle cues which could be hard to interpret if you do not know what to look out for.

Learning the body language of a dog is a huge topic, one which needs practice, there are a few tips which you can learn quickly. 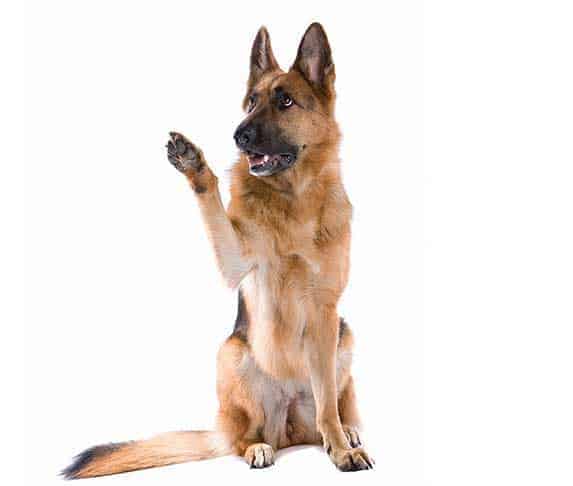 As dogs express themselves differently as compared to humans, we may misinterpret their body language wrongly.

The body language of dogs come in 3 different aspects:

While we can learn how to interpret these body languages individually, remember that they should be interpreted together to accurately understand your dog’s emotions.

There are various things you can learn from your German Shepherd’s body language, from their ears to even their yawns.

Their ears can tell us a myriad of things from how they are feeling emotionally and physically.

Read more to find out what they actually mean!

One of the adorable aspects of German Shepherds is, of course, their ears.

Not only are their ears adorably cute, but also highly expressive.

As German Shepherds were bred to guard herd and property, they need to hear well in order to be watchful.

Thus, they have an acute auditory sense, meaning that their ears are sharp and sensitive to subtle noise.

Through their ear behaviors, you will be able to notice some clues to what they are thinking and how they are feeling.

If you notice that your German Shepherd’s ears are flopped back and relaxed, it means your dog feels the same way — relaxed and calm.

You can maintain this state by avoiding loud noises to startle it.

For one, it could mean that they are curious about what they hear or excited when playing.

Alternatively, it could also mean that they are alert or nervous due to a threat.

To determine how your German Shepherd feels, notice his other body language and the surrounding environment.

If your German Shepherd’s ears are pulled back in a relaxed manner, together with a tail wag, it signifies that your dog is feeling friendly.

However, if they are pulled back and flat, it means that your dog is fearful.

Depending on his full body language, you will be able to tell which expression your dog is feeling.

If your German Shepherd is fearful, he may be growling or preparing to pounce, showing his submissive side.

When your dog’s ears are tilted in different directions, this may mean that his attention is on different things.

He may be focusing on multiple sounds at the same time.

They might also be tracking movements of different things while being distracted by external noise, directing their focus to multiple places.

This usually happens when your dog is outdoors and there are multiple noises attractive him, such as cars, nature and animals.

Up And Down Ears 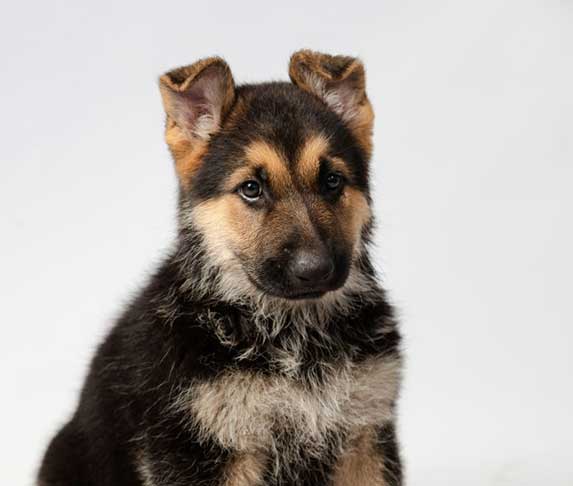 You may often notice your German Shepherd doing this, with tail-wagging, when they greet you and others.

This is the normal way of how German Shepherds greet others.

Dog body language may be difficult to interpret at times, especially if they are not understood.

When trying to understand them, remember to take note of their surroundings and anything which may result in them feeling unsettled.

To understand your German Shepherd better, watch them as they interact with others.

Depending on the rest of their body language, you will be able to interpret them accurately.

Remember that through their ears, they are able to show you different emotions, including:

On top of examining their ears, understand your German Shepherd even better through their facial expressions and their tail wags.

German Shepherd Signals You Should Check

Here are some of the common signals you can look out for:

1. Tail wagging shows that your dog is stimulated by something, showing various emotions.

For example, if your dog is wagging its tail fast and excitedly, it shows that they are being friendly.

However, if it is a slow wag, it could mean that your dog is wary.

2. If your dog yawns, it can either mean he is ready to nap, or feeling stressed and anxious.

Yawning may tell you that your German Shepherd is feeling overwhelmed and needs to calm down.

3. Pay attention to the current surroundings and identify what is causing his yawns — whether it be because he is tired or if he is overwhelmed.

4. Some German Shepherds also vocalize their yawns, depending on their personality.

5. An open mouth means your dog is relaxed and content.

If he suddenly closes his mouth, it means that something has caught his attention.

6. Accompanied with growling, a dog its baring teeth may mean that he is submissive or defensive.

7. If your dog is constantly looking away, with half-moon eyes, it signifies that he is feeling anxious and agitated.

Especially if these eyes are accompanied by aggressive body language, you should give them some space to relax and calm down.

As German Shepherds are rather expressive dogs, their behavior can more often than not signify how they are feeling.

Evaluating your dog’s behavior and body language is important as it will help you get to know them and their needs better.

Observe how they act in front of others and look for signals from their ears, along with other parts of their body to accurately identify how they feel.