But through selective breeding, they became smaller to suit the title of “lap dog”.

Chihuahuas are believed to be descendants of a small dog known as the Techichi.

The Techichi dog lived with the Toltec tribe of Mexico around the 9th century.

This breed was later thought to be extinct until it reemerged in the 18th century.

A pack of Techichi dogs was found inhabiting a cave in Casas Grandes ruins, Chihuahua.

The Chihuahua, therefore, is named after the Mexican town of Chihuahua. 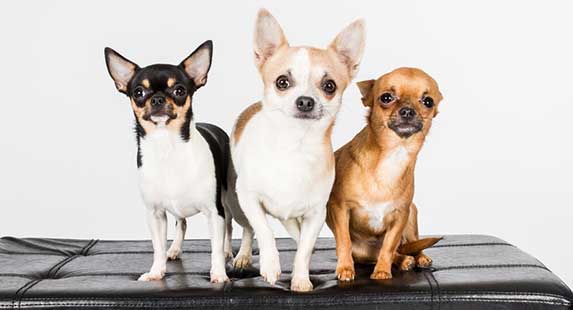 The domestication of dogs from wolves influenced the growth factor gene known as 1GF1.

A Chihuahua’s body is small due to selective breeding.

Early breeders would mate the smallest male and female Chihuahuas.

The larger Chihuahuas would either be spayed or neutered.

That is how this toy breed got a small body.

But selective breeding has its flaws.

Some genetic defects come with living big in a tiny body.

One of them is the infamous Chihuahua shaking and trembling.

Because of his small body, a Chihuahua is also susceptible to;

A Chihuahua’s body is so brittle that the slightest pressure could break his bones.

It takes a lot of time and alertness to care for a Chihuahua.

Can Cats and Dogs Communicate With Each Other?

Can a Chihuahua grow bigger?

Crossing a Chihuahua with a large breed is the only way to make him taller.

But take note that a Chihuahua mix will only be slightly taller than its purebred parent.

A Chihuahua’s gene for height is dominant in all these mixed breeds.

The other parent will likely influence the Chihuahua mix’s coat, body structure, and temperament.

For instance, a Chihuahua Border Collie mix combines the intelligence of both parent breeds.

A Chihuahua Australian Shepherd mix is revered for its braveness.

A Chihuahua Papillon has a longer curlier coat than a normal Chihuahua.

Fortunately, a Chihuahua mix dog may not inherit the common health problems of a purebred Chihuahua.

They may be tiny but their body structures are stronger.

A Chihuahua mix may not have the trembling and breathing issues either.